Patch 8.2 came out on the 25th and there were 2 new places to explore - Mechagon and Nazjatar. Basically a patch like Timeless Isle/Tanaan Jungle where lots of rares to kill, new rep to get and world quests all over the place.

But levelling up our Heart of Azeroth and sticking in essences gave us something to work on again with azerite. Pretty busy those first few days down in the Chamber in Silithus.

Some of the guys were going at it pretty hard. Deci, Fin, Ram, Mesa, Mag - all of them were out there getting their BFA Pathfinder Part 2 so we could fly. Boy does that make a huge difference! The Wonderwing mount you get with it looks pretty cool too - robot parrot! I managed to get mine on the 11th just after dailies reset. 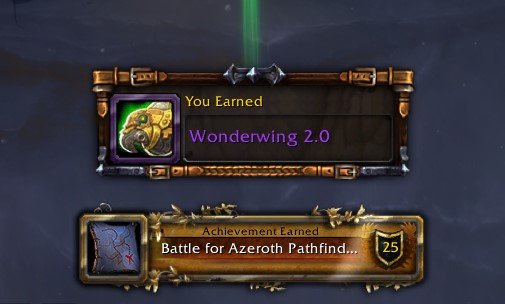 War mode is joke as horde, there is no way you can do anything out in the world with alliance ganking you left, right and centre. Mechagon and Nazjatar are pretty full on with Alliance on Oceanic side, so the only time I did any warmode in the first week of patch was to do invasions. However, with flying, it's much more tolerable. You can fly away though net-o-matic can still get you.

The other thing I did have a crack at was PvP islands. Managed to win a few, which was cool, some by having to PvP, some by just PvEing it faster than the other team. You get an essence (which I didn't find particularly useful) and I got some achievements, which was cool.

Lots of pet battles, lots of rares, lots of everything to do. People seem to like Mechagon better than Nazjatar, and I think building stuff there with the engineer is cool (but boy, bag space RIP).

Raid started on the 10th (which I'll write about next post) but it's good to see lots of people back in game. But for how long?