When interest in raiding dies down it's time for achievements! We only need 10 people on to do them (well, usually) and the first ones in Dazar'alor are much easier than some other achievements I can think of!

The first boss, Champion of light has a rather easy achievement. As you enter the room on the right there is a Jani pile of trash (Mysterious Trashpile). Click on it and you'll get a buff Jani's favor, which will make you turn into a saurid at random intervals, with an action button.

There are 3 enemies in the encounter - the Crusaders (that you face away from), the Disciples (who run around healing and being generally annoying) and the Champion (named boss). Go up to them when you're a saurid, click the action button and take the shiny you stole back to the Mysterious Trashpile. Get 3 shinies from each of the enemies and then kill the boss. The stupid thing doesn't track so you have to manually track it (getting people to call out after they collect is easiest), and also we said to do the mobs one by one - ie, do all the Crusaders first, then when you're done move on to the Disciples, then do the Champion (since usually they're the last one standing). Then BOOM you're done!

The next boss is Grong, so the achievement is a Donkey Kong reference. Gorillas and barrels...

There are 6 barrels at the bottom of the stairs which have to be destroyed by Grong's Reverberating Slam. However for each barrel he destroys he gains a 20% damage buff which stacks and resets each time he destroys a barrel. So you can zerg it if you can take the damage (oof a 120% tantrum damage ouch), get the melee to stack on the barrels so he will face the barrels and damage them instead of turning around and we all groan on the inside...

The third boss, Jadefire Masters, has a slightly different achievement. Kinda reminds me of the Ji-Kun achievement, Soft Hands.

There is a hidden egg that only shows up when you practically stand on it. Here it is on Horde side - if you're facing the boss, it's behind you and to the left. 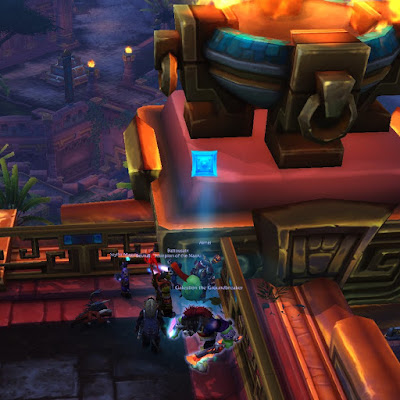 As you do the fight, you have to make sure no fire damages it. So we picked it up after the Living Bombs. Crooked was the designated carrier, and that also meant he could use no abilities because that would also break it. He spent most of the fight at range so that accidental fires didn't break it. Phase 2 running around and dodging fires was fun for him and we had to make sure someone hung back to heal Crooked since he couldn't heal himself.

Then the annoying part, the dragon had to breathe fire on the egg. It doesn't do anything that we could see that showed us it had been breathed on so we had it breathed on a few times just to be sure and then we killed the boss. Success! 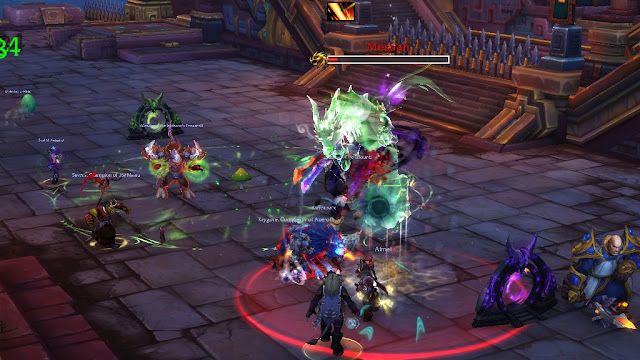 Opulence's achievement was a personal one. You need to have one person (at least) have their Singing Sunflower out. The more the better!

During the fight when someone picks up gems, someone needs to get the Topaz. When they act like Nigels and stand on their own they get stacks of Incadescence. Once they get to 100 stacks with the topaz they get the Grossly Incandescent aura which affects people 20 yards around them, giving everyone a Brilliant Aura buff. /praise your singing sunflower when you have that buff and you get the achievement after the boss dies. 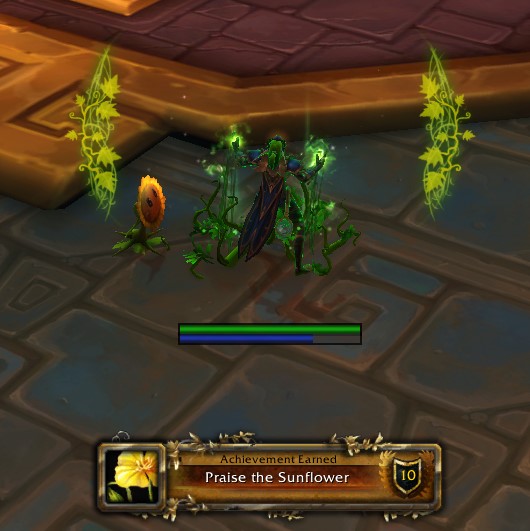 A few people missed out, so the next time we're in there we'll have to hit that up again.

Well, if we do a few every week we'll get these knocked over in no time! I wonder if we can do the final achievement when the tier is current... we usually do it during the next tier when we've overgeared it a bit. Good work though, Frostwolves, onwards to Glory!
Email Post
Labels: Achievements battle for Dazar'alor Raiding