Pet battle week is a good week to do PvP pet battles - or is it?

Sometimes you just get smashed when you're trying to do the Family Pet Battle achievements. And there are more serious pet battlers out during that time.

However, there are also not so experienced people out there too!

So on the 27th I managed to get the last few of each family done! Yes, it did help a lot that my friends were battling as well to get their 5 pet wins for the week...

My dragonkin 3 worked well with one that had Mana surge (eg Nexus Whelpling), Life exchange (eg Nether Faerie dragon) and I used Bronze Whelpling for Early Advantage and Lift Off. I did pretty horribly when I came up against someone trying to do their Humanoid Brawler - I should have just quit instead of trying to beat them.

Humanoid brawler worked well with Lil' Bling (for Make it Rain and Inflation), Gregarious Grell (for Cauterise and the Dodge), and Winter's Little Helper (for Blizzard, Ice Lance and Gift of Winter Veil). But it was pretty hit or miss, really.

Flying I was lazy and used Triple Darkness.

Undead you can't really go wrong with an Undead Val'kyr, and I tried using combinations of Frosty for Blistering Cold, Fragment of Anger (for Soul Rush and various other combinations), and Giant Bone Spider to try to heal myself. Wasn't really the best combo to tell you the truth.

I can't remember my Magic or critter combos!

Anyway, if you had a comp that worked well, drop me a line! I'll try it out next pet battle week :) 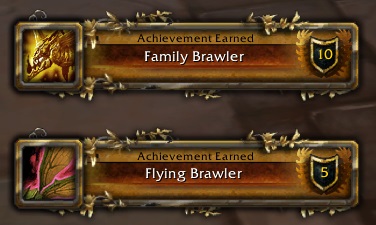 And the reward? A Tabard with a pet battle paw on it. Well, that went straight into the appearances tab... never to be seen again...
Email Post
Labels: Achievements pet battles