Raiding - Normal cleared and another boss down!

Sunday raiding went pretty well considering we were just winging it. No offence to Ram, but I don't understand anything when it's told to me in words, even when I watch the video I don't get it. And Crooked openly admitted that he wasn't listening to anything Ram said - poor Ram. He does such a good job researching too! Something we may have to figure out later on increasing engagement...

Anyway, I'm sidetracking myself so I'll get back to topic.

We managed to clear all the bosses reasonably easily, considering. By no means was it clean, more fluke if anything!

On Sunday we did up to Mythrax, and that was our hardest boss, taking us 5 goes to get down. We just had funny things happen like trying to get people out of the stun spheres, where one person would knock them one way and someone on the other side would knock them the other way and they wouldn't get out LOL. Also, we were a bit confused as where we had to go when Mythrax went to the middle so half went to one tank and the other half went to the other tank and made mess everywhere.  So the next attempt we were all super organised and as soon as Mythrax came to the middle we all swamped to the other tank but we forgot to wait for the stun orbs and because we were all in one spot they spawned on top of us and we were all stunned and lots of us died.

We eventually got it down before the end of raid and that was pretty cool!

On Monday we came back to do G'Huun. The fight sounded complex. Feed the mouth. Walk thru the slow things. Dodge these eye things. Heal lots. Yeahhhhhh. I didn't understand half of what was going on.

So I have absolutely no idea how we got it on our 2nd go. And so tidily too - NOT. 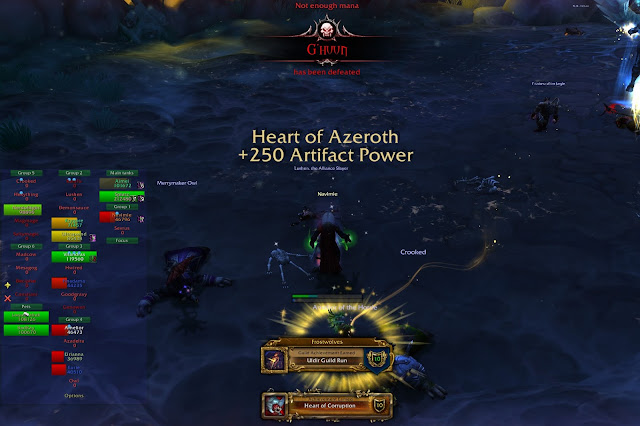 Ok, so now that was over we had a few minutes break to get ourselves ready to go do heroic. So off we went to tackle Fetid Devourer again and it was wayyy easier this time round, now that we got a little more gear and just went to kill one egg. Easy. 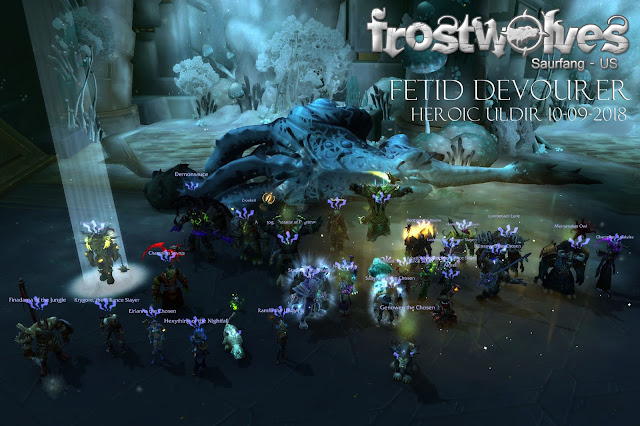 Next raid week will be better, hopefully without resets to screw over our raid days. A new week, with new shinies!
Email Post
Labels: Achievements heroic uldir Raiding uldir