On Wednesday we cleared all our farm bosses in one day! That was pretty cool. What was even MORE cool was that we managed to get Zul down on Thursday! 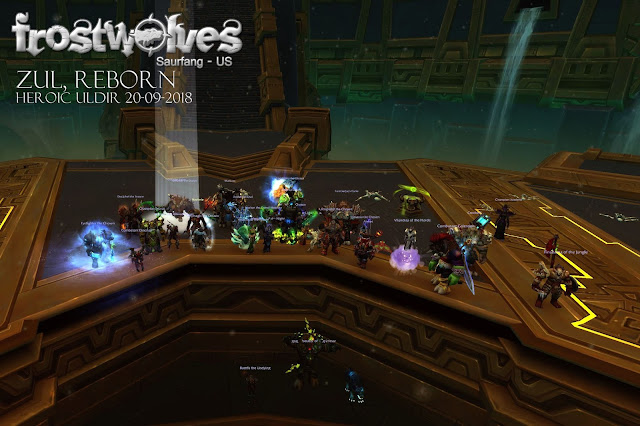 The priests did a fantastic job dispelling stuff, and without that control it would be a total nightmare! Allocated healers to tanks helped a lot too in the final part, as they were taking a walloping. There was a lot of stuff to be called out in terms of CCs, dispels, focus targets that everyone doing their part was really great on the kill. Super happy with that!

Then we attempted Mythrax. Now, that was a total bummer. So much melee with a 5 yard spread meant that people were on top of each other all over the place causing terrible damage to everyone. So much damage going out in first phase before we went to the corners! It was hard!

We called raid early and had a discussion about what we're going to do with our group. Suggestions included trimming raid size down, cutting melee numbers down, running one group of melee through and then a second group of melee through with the same tanks/heals/ranged... none of these ideas really appealed to me.

In the end, we decided we will just cut raid to hunting pack only and not fill the raid with extras. Melee will stack in groups and spread when orbs are about to come.