It's that wind down period so that means we can do achieves, yay!

The goal this week was to do the first four achievements in Antorus the Burning Throne, and they weren't too terrible, just a little long.

For this one, we had to drop decimations on these larvae that pop up in various locations during the fight. They don't stay long and then they burrow back into the ground. 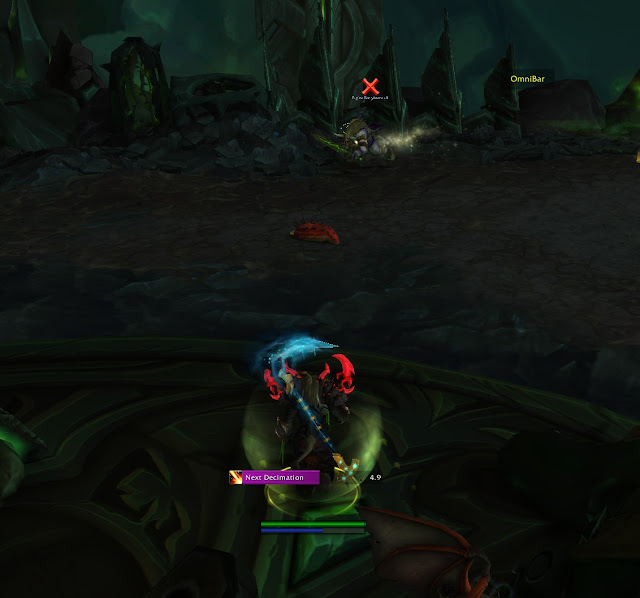 Here is a pic of one I took last week to show people what they look like. What is misleading is that they're not all red, they can be green or neutral coloured. And they are not targettable.

We noticed that the left sided ones tended to bury back into the ground before the decimation hit them. Not sure if they got hit or not...

Pro Tip: Call out position of the worm (eg. back left, far right) so that people can run to the right spots.

Next, was Hounds Good to Me with Felhounds of Sargeras.

For this achievement, the dogs had to have 5 stacks of Fel Imbuement and then be killed. To do this, they had to be taken to pools which have a colour in them and take your hound to the appropriate colour. When you do, they get one stack of the Fel imbuement. 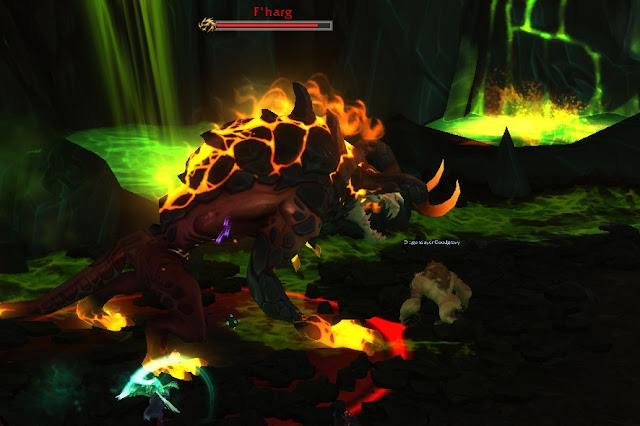 If the dogs get close to one another (40 yards), they lose their Fel imbuement, so keep them at the edges and move around.

Pro tip: Tanks call out which direction they're going if the pool they need is close to the other dog. Good communication between tanks is key.

Third on the menu was This is the War Room! with Antoran High Command.

Basically all you had to do here was only put 3 Felshield emitters. That just meant a little more healing, and on normal, even then it wasn't that much. Galestion was in the pods and he said he fell asleep because there was nothing to do. He could at least have cleared bombs....

ProTip: Get someone who has done the pods before to do it, and mark a spot where you want them to place the 3 Felshield Emitters.

The fourth achievement was Portal Combat with Portal Keeper Hasabel.

For this achievement, you have to open the Chaotic Rift and to do that, you had to get a debuff from all three portals. The red portal has the Everburning Flames, the Purple portal has Cloying Shadows, and the green portal has Caustic Slime.

The way we did it was to get a fast moving person to go to the Purple then Green to get the debuffs, whilst a second person goes up to Red and brings down the flame. When time on the Everburning Flames expired or is dispelled, the flame drops on the ground and can be picked up by someone else and moved. Move it to the green portal so that when the person doing the two debuffs comes out, they can pick up the Everburning Flames straight away.

This opens a Chaotic Rift, which sucks everyone towards it and also puts a coloured burning debuff on people that lasts for about 8 seconds. When the countdown hits 0 you explode for 5 million damage, but if you get up the portal platform that is the same colour as your debuff, when the debuff expires, you take no damage. It's a pretty obvious flame, like you can see on Krygore below. 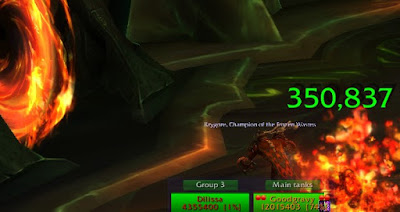 So, kill Hasabel with that Chaotic rift open and we're done!

Protip: Get a fast person to run with the Purple and Green and anyone else to get the Red debuff.

So for kicks we thought we'd try the Eonar Achievement. Spheres of Influence. There are 5 orbs to collect (not ANOTHER one of those orb collecting things) and apparently you can position yourself before the fight to get the orbs. But we couldn't find them so we just started the fight.

Once we finished the fight THEN they spawned, and they spawned in the following positions. They weren't all up at the same time, and we tried to collect in order, but I don't think you need to collect them in order. What we did notice was that #5 was the last to spawn. HK was up there but it wasn't there, and every other one had been collected. Crooked had hearthed because he thought we weren't doing it, but when he saw we were he made his way back. Poor guy was literally 20m from the entrance to raid when the orb spawned under HK's feet and then boom, we all got the achievement. Poor Crooked missed out.  Even Duggra got the achieve and he was nowhere near the boss, off at the next boss.

Protip: Have someone who is good at jumping/flying get to #5. The rest are easy to get.

So that's the first 5 achieves done! Now we can skip all those next week and get the next lot done!
Email Post
Labels: Achievements antorus the burning throne Raiding