Down to the last part! Argus and Stardust Crusaders!

When we were attempting it last week we just couldn't collect enough motes inside. The success rate would be better with more people. So, we begged as many guildies as we could to get online so we could have a better success rate.

This time Galestion came. I asked him to come last week for Don't Sweat the Technique but he was busy playing DOTA even when I begged him. So he missed out on the achievement, much to my dismay.

Splatz, Sev and Eurie also came, and that helped bulk up numbers. Strophic came too. Now we had the opportunity to have as many Reorigination modules because inside they each spawn 4 small motes, and it's those motes that we need 20 of in 5 seconds.

What the achievement says is to collect 20 motes in 5 seconds. The motes are the black small orbs you collect when you're dead. Khaz'goroth gains energy with each orb you collect, so when u get to 80 energy (in 5 seconds) then it's time to kill him.

The problem is that it's sooo long into the fight to get the achievement. If you make mistakes towards the end it takes ages to get to that part of the fight again.

You have to extend the fight a fair bit. The first time the Reorigination modules spawn, there are 3. Kill them all, don't collect motes. The second time they spawn, there are 4. Kill these. Keep waiting until there are at least 6 modules, just to be safe. Then there will be 24 motes inside, so if u miss one or two, it's ok.

We explained it to everyone, said don't die if u can help it, but if you die during the round with 6 matrices stay dead until we say release. Everyone died in different areas of the room and then Crooky called out for everyone to release and collect.

And everyone did. I was busy healing so I didn't see Khaz'goroth's energy bar, but it reached 80...

And we did. And it was glorious! 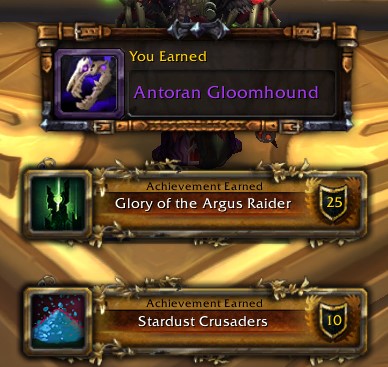 Protip: Wait until you have 6 matrices or more so you can get 4 motes inside for each (24 motes). And have a big group. Release at the same time and collect!

That is the first time we have done a current "Glory of the Raider". We usually wait a tier and go back to get the achievement.

For everyone who did come every week for the last 4 weeks, we took a pic of us with our new Gloomhounds. Those who had the mount from Felhounds mounted up and joined us too. 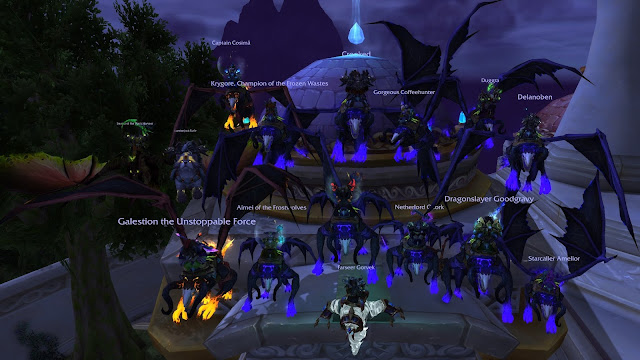 If you want to have a quick read of how we did the other Glory of the Argus Raider achievements...
Part 1 (Garothi to Eonar)
Part 2 (Imonar to Coven)
Part 3 (Aggramar)