Raiding - Well that's a nice finish for the year!

I actually said this week that we'd have a week off for raids over the Christmas/New Year period. But, there were an astounding number of people turning up to raid and I said Normal or Heroic depending on numbers, and so we did heroic.

HK was still not at home and trying to play on his laptop, so raid wasn't perfect. The good thing was that Splatz was on holidays so we didn't have to start late. So on Wednesday we knocked over everything except Aggramar, and so on Thursday we just had Aggramar and Argus to do.

Some pretty sloppy kills due to lag and what not, but we managed to do them. It just shows you how forgiving these fights are. I think we still have a ways to go before we get up to Mythic standard.

I can't believe that it only took us 4 goes to kill it. That is just outrageous! Thinking back to how many goes we had on Archimonde, or Blackhand, or even Garrosh! I'm sure we had like 70 goes on those!

We were missing Pippistix and Xethi, but Gen and Gravy were there (as our most casual heroic players), so it was pretty cool to get that fight down! 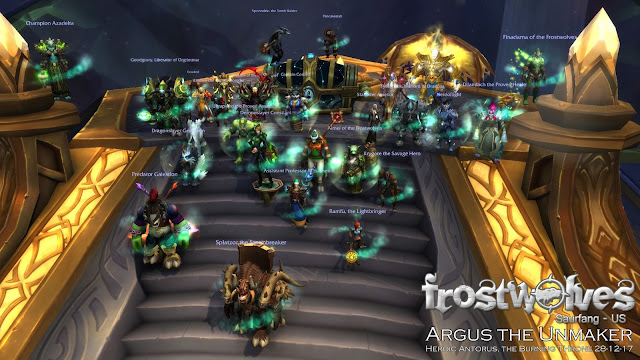 And yay, mount! This Violet Spellwing is the reward for the AoTC. I forced everyone to take a pic... except Fin who was fast to leave raid and slow to get back into it. 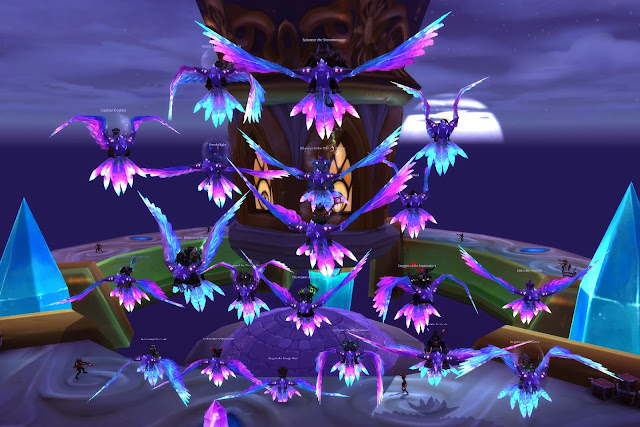 What a great finish for the year! Grats Frostwolves! So, what do we do now? It's pretty early in the tier still, so we might as well have a few goes at some easy Mythic bosses if people are interested, but usually the guild takes this as an opportunity to go play other games... we'll see!
Email Post
Labels: Achievements antorus the burning throne heroic antorus the burning throne mounts Raiding