I totally forgot that it was on, and Spoon reminded me.

In the Asia pacific section we had 3 Aussie teams, 1 NZ team, 2 Korean teams and I don't know where the last team was from! Our guild was cheering for 2 teams from our server - Ego, which is the #1 guild on our server, as well as being world #13 for clearing Mythic TOS (according to WoWProgress). Team Ook and Free Marsy had members in them that were recognisable to some of us and I was looking forward to seeing them in action. 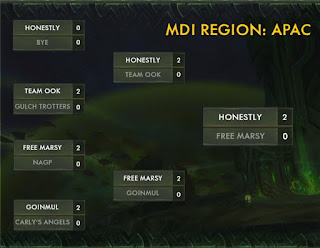 Unfortunately I missed most of round 1 and only got on when Carly's Angels were going up against Goinmul. Quin, a popular NZ streamer was in Carly's Angels, but unfortunately there were beaten by the Korean Goinmul. They lost their DHT by 0.45 seconds!!! Darn! I did however learn something, and that was to go bear form for Glaidalis and be max range so he would always jump me. That makes it heaps easier for Tyrannical - geez, I felt like such a noob!

The semi finals were exciting, with lower Kara being the first dungeon for both teams. It was brutal! Honestly did a really clean run compared to the other 3 teams which had 20 deaths or more in their runs. Learnt a trick there too - that tanks like monks or DH can jump away from Attumen so that he doesn't do his shared suffering. Handy to know! Honestly is also Aussie, so with 2 aussie teams in the final, it was cool to know they would get thru to the world championships. They are from the guild of the same name on Frostmourne, another top 20 world ranked raiding guild. I thought they were very polished in their play!

The last round they did Cathedral of Eternal Night and Honestly took it out faster. There was a cool strat that I want to try - which was getting a warlock to control the demon who makes the green dome for perma haste buff.  Free Marsy chose Nelth's lair as their dungeon, but unfortunately got beaten on that as well. The pelter ranging didn't work as well as they liked with many deaths for Free Marsy, which was sad for me, as watching their healer, Xerase (resto druid) was inspiring and I was thinking how I need to learn to heal like him!

All keen to try M+ now on my raid nights off!