Spanky and Coffee take me to my first Blight Boar Concert

Spanky and Coffee asked me to go to a concert in Darkmoon Faire - for an achievement, of course!

The problem was, I was at work on my laptop and crappy internet so it was going to be very laggy. I didn't know what the achievement was and wasn't sure whether I would get it, and I was right, there were LOTS of people there AoEing and that made me very laggy.

From what I could tell, the concert started and then Death Metal Knight came, who seems to be a bit of a party pooper, and we had to kill him. Then a whole bunch of ghouls came and we were supposed to push them away from the band.

If you keep the band alive, you start getting this buff saying how much of a fan you are. I was busy trying to stay alive so I wasn't paying much attention to it, but it goes from Casual fan up to Number one Fan. 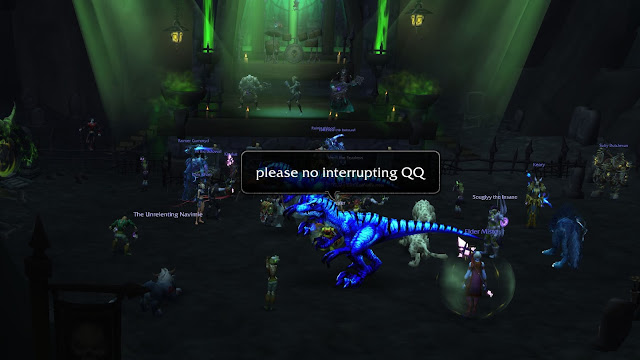 At 1 FPS I basically just spent my time standing there doing instant cast things like dots and knockbacks when Spanky told me to. I also healed myself because I'm sure I was standing in bad because I couldn't see what the hell was going on.

Fortunately, I got an achievement or two! 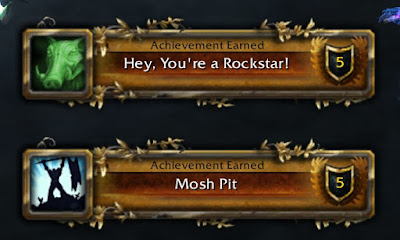 Now there are a lot MORE achievements and some cool things to get, so I need to go back and try it again. There is a cool guitar that drops as well as some helms and a toy.