Raiding - When Kil'jaeden goes down, Argus is up!

Well we managed to clear normal on Sunday, and the annoying thing about the cutscene is that it blocks me from taking screenshots of my achievement!

Thanks to Koda for giving me her pic!

In the cutscene, Illidan has now opened up the way for us to go to Argus, and Argus is now in the sky everywhere we go. It looks SO COOL.

We tried to take a pic with it, but I didn't do very well. 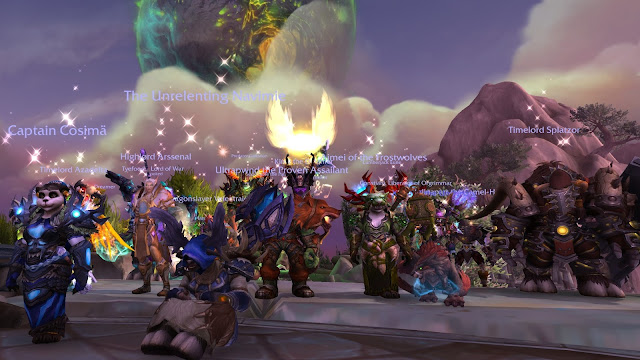 Ahem, I should be talking about raid.

Kil'jaeden was easier than I thought it would be - just run around and stay alive in the in between phases. I was dead during Fallen Avatar so I have zero understanding of that fight except run out with your green stuff, hit the maiden when she has a bubble and run away when DBM says run away. Once you fall through the floor I'm not sure what happens.

Surprisingly, we didn't have a full Sunday raid! Usually people are busting to get in and we have to sit people out, but there were at least 5 spare spots. Which wasn't necessarily a bad thing, a smaller group was easier to do stuff with. But I was happy to see some casual raiders attending. Now that they know we are clearing normal on Sunday, there may suddenly be an increase in attendance.

So, next tier we go to Argus! COOL! Though we already knew that - they said so at Blizzcon. Good work on clearing out normal everyone!
Email Post
Labels: Achievements Raiding tomb of sargeras