Raid turnout was really small on Monday! At first it was just Cosima and I healing but we managed to convince Magato to try disc. Not sure if he was happy about that...

Maiden of Vigilance is basically Thaddeus version 2 where you stack same debuffs on either side and there are periods where it's reapplied and can change. There's a fel and a holy side and you have to stack with your side when you get your infusion and don't be on the wrong side or there are lots of dead people. There's also smash that everyone needs to absorb and there are bombs that are placed on you so you basically jump in the hole when your bomb timer is at 1 and when it explodes it pushes you  back out again. Jump in too early and you'll keep falling. Jump in too late and you'll blow up the raid. On normal the timer is about 3 seconds so we had a few issues the first time because everyone jumped too early. We had a few goes on Thursday but had heaps of trouble with people picking up the wrong orbs and then causing bombs to be everywhere meaning lots of wipes.

Come Monday, we had less people and everyone had it drilled into their head that only the tank gets the bubbles and we stack and move as a group. This is for the warlocks who are not like fast moving shaman and priests who run around picking up all the orbs. Also, running along the lines meant that we would never hit the bubbles so if you are worried about hitting stuff, you can happily run on the line. 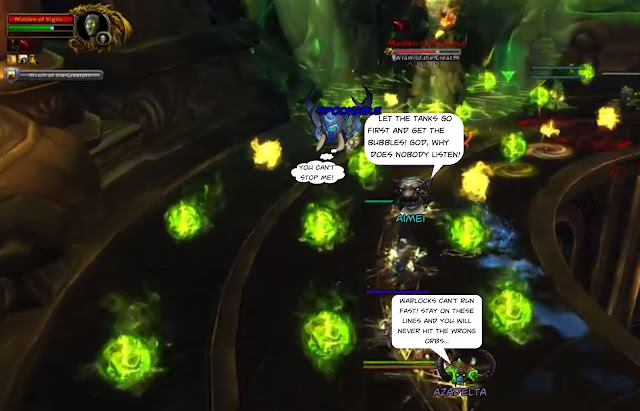 We had a 2% wipe and then Pancake and Crooked logged on. Kinry also had joined an attempt or 2 before and so we were looking pretty good for a kill. And sure enough, next go, we had a kill! 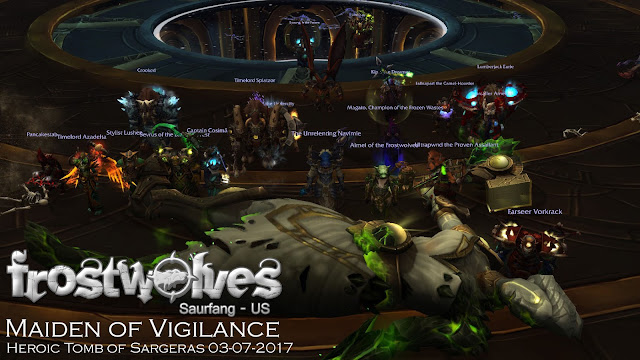 Yay us! It might be just me but it feels a little easier this tier than the last tier, but we aren't on Kil'jaeden yet. We also had a major guild setback (Kyxyn passing away) when we started Nighthold so that was a bit of a shock as we had to have a grieving period as well as a pick up the pieces period. I think about him fairly often still, and talk to him (in my head) about things that are going on. I think he'd be pleased with how we are doing mythic pluses. I think he would be happy with our progress in raids. At the moment the guild is in a pleasant place with people eventually settling into their place here (or not here). I hope that this nice period will continue :)

Oh, whilst we were having attempts on Fallen Avatar, Eurie suddenly said "I think it's creepy with these people watching me."

Ohhhhh. They are creepy!

LOL! However, that was a good raid week, here's hoping for a new kill next week too. Grats Frostwolves!
Email Post
Labels: heroic tomb of sargeras Raiding tomb of sargeras