Last week before ToV! I did not feel like setting foot into Nighthold so it was nice to try for something different, even though it may take a while...

So the first achievement we hit up was Odyn's one, You Runed Everything!

For that we had to gain the Runic Mastery buff, which you gain by killing the Runebearers in the order at which the Runes on the ground light up.

It did take quite a while to get this sorted out, and had multiple wipes but it was so satisfying when we got it down - just like getting a new boss kill, really!

About 5 seconds before the Runebearers are about to drop the runes on the ground start lighting up in a particular order, and it's pretty quick so you need to look at it quite closely. I called them out, and someone else typed it out in raid. We had everyone start moving to the runes but NOT stand on them yet - the reason for that was because we didn't know if the achievement required us to light the runes up in that order as well, or just kill them in that order. So after what felt like 15 attempts we got it!

Tips for success - move Odyn out of the rune area so you can see better. Have a dedicated rune watcher and a separate typer. Be on a voice chat program!

But so many things went wrong, as you can imagine. Firstly, my colour naming is a bit lame. I called one of the runes red - the one that looks like an N. Everyone else says it's orange. Looking at it, they're probably right.

The other problem I had was that the green rune pictured is a cyan colour on my screen. Which is actually the colour of monks in raid, so I would keep calling that colour "monk". Also, what I call pink, everyone else is calling purple... BUT THEY BOTH START WITH P SO IT DOESN'T MATTER RIGHT??

So we would have RYGPB or something typed so we would know what order to kill them in. Most of our wipes people were not getting to the runes fast enough and we'd die because we hadn't killed the runebearers. You don't have much time to kill them so switch fast!

Another that that went wrong was people would get stunned by the orbs because we were being blase. Happened to me a few times as I was staring at the runes instead of orbs. I also copped a Spear of light in the arse because I was staring at runes and I was standing on a swirly and hadn't noticed. That knocked me forwards which caused me to miss the first rune because I lost sight of from the knock.

Once we had all those things ironed out, we had it. You could see improvement with each attempt, (except the times I screwed up the calls) but boy were we happy that was over!

Next up was Guarm's Boneafide Tri Tip. I told Triarchi that his name was in this achievement so that was a good sign.

This is one of those achievements where you go, "Oh, I never noticed that thing there before!"

Behind Guarm there is a bone on the floor. That's Guarm's chew toy. Basically someone has to hold the bone and have it exposed to the three different colours and then kill Guarm. However! The same person can't do all three because once you get the colour debuff, you can't stand in another colour without dying (or at least taking HEAPS of damage). 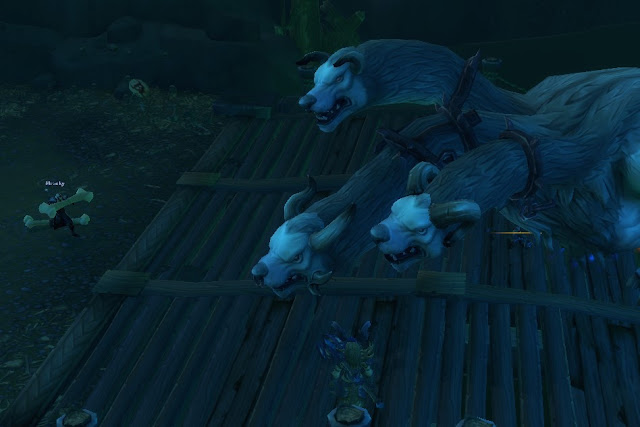 One thing that IS good is that shamans in ghostwolf do not get a movement speed decrease. Is it because they are dogs? I don't know. But that is a great advantage so getting 2 shamans to do it is very helpful. You have to be in ghostwolf before you pick up the bone because shapeshifting makes you drop the bone.

If you drop the bone and Guarm is charging around, it will pick up the bone! I wasn't sure if Guarm held a bone during the fight normally, but after checking out fight pics, Guarm is NOT carrying the bone. Clearly just something that happens after you pick it up!

So how should you do this? We had a person pick up the bone and stand still and got the tanks to face Guarm backwards so that they took the first colour. After that, we had the shaman pick up the bone after it was dropped and get into the second colour. Ideally another shaman would pick it up again and move to the third colour and then off you go and kill Guarm.

Tips for success - Shamans! Also if you don't have shamans if you could have the tanks face it in the same direction each time so that someone could be on the border of two colours so that they don't have far to run to get to their colour. That would probably work for the second colour and on the third colour a shaman would be ideal or just pray for good luck when the colours come so that if they're on the border of two colours, one of those colours is the one you need.

In our attempts we had Falln doing the first carry and then Gen and Lushen assigned to do the other two colours, thinking with their speed buffs they might be able to move faster. However when Gen used a speed boost it dropped the bone, and when I looked it up you can't displacer or use speed boosts when holding the bone, but you can use the speed boost BEFORE you pick up the bone so that the effects are still there. So we fiddled our strat and had Crooked pick it up and did the second one and Gen did the last one, and then Tacky picked it up after it fell down again and held it whilst we killed the boss.

We attempted Helya's achievement, Patient Zero, but we were unsuccessful. Never mind, we will try it again one day, when we have nothing to do again on Sundays!