Raiding - Sisters and Host were TOAST!

Well that was a productive two nights!

The trash leading up to Sisters and Host is SO painful. Poly bombs everywhere are just begging to be used by trolls. It was pretty much like this:

Ram: Uhhh it would help if you DIDN'T polymorph your healers if you actually want to get heals...
HK: That goes for tanks too!
Sev: Oh, Nav, sneaky with the bear form to avoid the poly!

On normal on Sunday Splatz must have triggered every possible trap. On what must have been the 5th trap he just said "I give up!" and so in heroic, he was hesitant going in. That's ok! Falln, who had just moved house had no idea and was wandering in and triggering all the traps. We even tried to get Pancake to go in and detect the traps for us. But instead, Pancake decided to click one of the runes on the wall which turns you into Gul'dan or something and you start killing everyone. He killed Spoon, much to the raid's amusement. Shamans. Such fragile little glass cannons!

Alunaria inspired me with pics and chat bubbles so in a hybrid between The Faily Frostwolf and my usual chatter I thought I would make some mini-comics to describe what we got up to with Sisters. 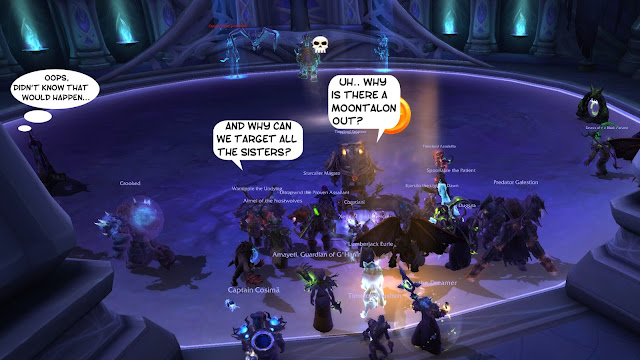 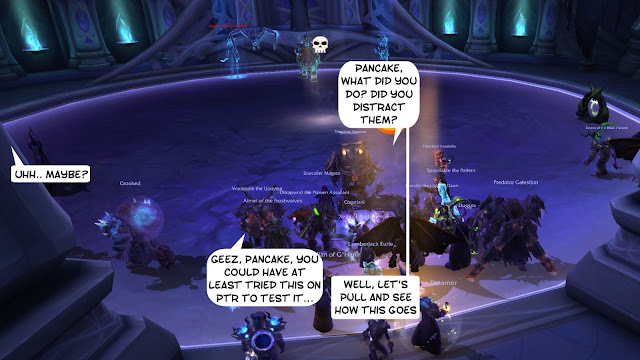 Apparently, if you distract the bosses, it bugs out the encounter. What is SUPPOSED to happen is that only one sister is targettable at one time. Each one does different things (throwing glaives around, casting spells and making arrows fall, and also one of them summons an owl that does a TON of damage.

When Pancake distracted them, suddenly ALL of them were targettable (which meant all of them were doing their abilities) and the owl was up. So we thought ok let's give this a whirl.

SO. MANY. ABILITES. ACTIVE.

Half the raid had tried to run away and the other half had charged in. Those that ran away were not safe as they all died too. Anyway, that was interesting. BUGGY MUCH?!

Move out for glaives, move out of the rain of arrows, stack on the person with the shot, kill the owl and it was nice. Just lots of movement. We were happy when we got that down! 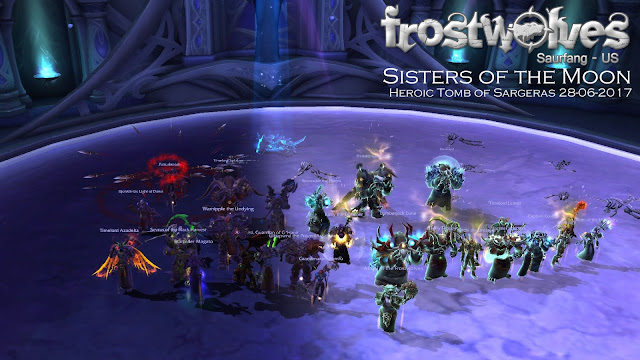 The floor still changes from dark to light even after the encounter is finished so this pic looks cool because half of us are in the light and sparkling like Edward Cullen - such shiny little Twilight vampires.

Then on Thursday night we went to go and look at The Desolate Host, which I found as confusing as hell on normal. All I understood after normal was there is a corporeal and a spiritual side, if you on the spirit side stand here, corporeal side stand there, and heal. End of story.

LITTLE bit more complicated than that. On normal I was on the outside. This time I was on the inside. At first it was a bit overwhelming with all the stuff we had to do. Corporeal side on the right, Spiritual side on the left because if you cause damage to players in the other realm if you're within 8 yards of them. Take your Soulbinds to the middle so you can partner with your other side person and get it off. Interrupt these shattering screams from the Priestesses until we say stop interrupting and then take your scream stacks to go explode on something that has bonecage armour to get it removed. And then when wailing souls goes out everyone out of the spirit realm and go up top so we don't have to heal you through the damage. And that was just my side. The corporeal realm had some debuff they had to line up along the edges so it didn't bounce to others (I think that was Grasping Darkness) and then sometimes they would get shot with a spear and appear in the Spirit realm and we'd have to heal them up.

Yeah. I was confused too. But after a few goes I got the hang of it.

I also had terrible mana issues. Dispelling all the time was eating my mana up. Fortunately when everyone got out of the Spirit realm for wailing souls it was easy to heal - just stand in the circle and chuck hots around and it was a good time for mana regen too. Told Kinry to move into the circle but he said "No, that will increase your HPS!" Bastard. :P

Once that dreadful phase was out of the way the last bit was easy... and boring. Move in, move out. Each side would have to move in and out at different times but with tanks calling it, was easy. A nice little breather after the hectic run around in the first phase. 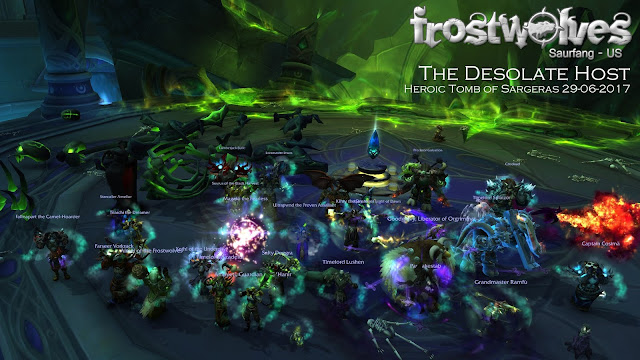 Yay Frostwolves! Now, to stop doing heroic for a bit and finish getting normal done. That's our mission for Sunday/Monday.