Getting the best sense out of the Legion Storyline

I was fortunate not to do the pre-Expansion events first thing on Wednesday, and thus have the benefit of other's wisdom and experience about the order in which to do events to best understand the Legion Story.

A word of warning for those who have not done the events - spoiler alert!

Start off with the Alliance Broken Isles.

As you work your way from getting your mission to buffing your weapon and eating your last meal and fighting a duel, and then heading onto the ship that will take you to to the Broken Isles, you see bits from the Legion trailer as the Alliance heads out to investigate these demonic incursions.

Once at the Broken Isles, you join a scenario/raid group and all head in fighting demons and taking down pillars - a look to the right island and you see the Horde landing to do the same thing. 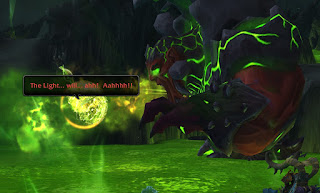 Tirion Fordring is seen, and we all make our way towards him, thanks to Jaina and her Elsa-like ice bridges. However, the Ashbringer is killed by the demon and the Alliance and Horde both take turns beating up his killer, and continue making our way towards Gul'dan and the portals.

Alliance take the lower ground, Horde takes the higher ground. We confront Gul'dan and countless demons - demons we have fought previously as raid bosses, since it is very difficult to destroy a demon as they merely get sent back to the demon world to be born again.

Suddenly, the Horde disappear in what looks like a betrayal, and the Alliance are forced to withdraw. The Gunship arrives to take them but are held back by yet another giant demon, and King Varian Wrynn gives a letter to Greymane and then jumps down to attack the demon, allowing the Alliance to escape. He is then overwhelmed, and then killed by Gul'dan.

Back in Stormwind, Jaina is angry at the the Horde who abandoned them, setting her apart from the other Alliance leaders and the Illidari appear to offer their services to the Alliance.

Well, I was reeling after that turn of events. So now, I did the Horde side of the Broken Isles. 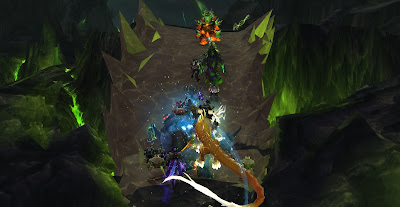 Most aspects were similar, and we could see the Alliance doing on the left side doing the same version of our events. The Horde also ran to Tirion Fordring, but it was Thrall who made the earth bridge for us to cross over to get to him. We also witnessed the death of the great Paladin, and then we fought the demon with the Alliance.

On the high ground, we could see the Alliance confronting the demons, but a portal also opened on our cliff top and demons poured out in overwhelming numbers. Sylvanas and her archers did not realise this at first, and the Horde leaders began to fall (Crooked told us later that they fell because of space lasers from ships in they sky - I totally didn't see that in the scenario). Sylvanas heard Vol'jin cry out as he was speared by a demon and she came back to aid the Horde, and Vol'jin implored her to call for a retreat to save the Horde. We saw the death of the King of Stormwind and Gul'dan's laughter of triumph.

We ran for the boats and sailed back to Orgrimmar. In the throne room, we witnessed as a dying Vol'jin handed over the mantle of Warchief to Sylvanas the Banshee Queen, who vows to lead the Horde as she stands beside Vol'jin's funeral pyre.

At this stage, Alliance didn't know that Horde withdrew because we were also overwhelmed. I also think they didn't know that Vol'jin had died and Sylvanas has taken over the mantle of Warchief.

Now, onto the Demon Hunters!

I haven't completed the starter area yet, when you complete your task and head to Orgrimmar, you see Sylvanas standing over the pyre of Vol'jin - if you hadn't done the Broken Isles scenario, this may come as a bit of a shock, and you wonder just what the hell happened! But the Demon Hunter story, from what I hear, fits in very well with the rest of the Legion story.

Some of the items from the end of WoD pre-events such as Whole Body Shrinka', Sen'jin Spirit Drum and Xan'tish's flute (which are now toys) are now available to buy as well down by Bladefury's Dock in Durotar. There are also some shirts and lucky items to buy Alliance side. There was a bonnet too - I didn't manage to pick that up and once you finish the scenario, you can't go back and get the items.

Kyxyn thought it would have been better had they brought out the Broken Isle scenarios first, before they let us see Demon Hunters. The story would have flown a little more smoothly then. There are a large number of people who went straight into Demon Hunter and were a little surprised when they saw the cinematic cut scenes.

So how is everyone enjoying their Demon Hunters? The guild is now full of them and we seem to see them EVERYWHERE!