I read everywhere on forums, blogs and twitter, about raids that have died. Guild leaders complaining that there is lack of interest and no recruits, and lack of interest from the guild to help out. How they throw the towel in because it's all too hard and the recruiting, losing raiders and no raiding is killing their enjoyment of the game. Or how a guild drama can fracture a successful guild and it dies.

It astonishes me that a successful guild can go from hero to zero so quickly!

The situation is unfortunate, but things like this do happen. How you deal with it is what will either inspire your guild or suck the life from it.

What message does it send when the guild leader does not log in? After any kind of conflict, everyone is a bit skittish. What's going to happen? What's going on? People are afraid and worried that their raiding will be gone. They need reassurance and of course, an explanation, and a direction or plan. Often, people don't want to leave, but they're not sure if they have something worth staying for.

It's not like I HAVEN'T had any conflicts. I have had my share, and learned my lessons from them.

My biggest one of course was with Moo, who was at the time, the longest serving member of Frostwolves AND an officer. The conflict arose over the use of an addon and we wanted everyone to use it. Long standing members of the guild baulked at it, whereas all the newer members (ie less than 4 years) accepted it. It frustrated me and so I said I would impose a penalty for not using it, which at the time was not award EP (Effort Points from EPGP) for failure to comply.

This caused a huge fight in officer chat which resulted in Moo leaving the guild. The others who had also baulked at the use of the addon decided not to raid also. One because they protested against the argument I had with Moo, the others said they weren't angry or upset, but didn't want to cause drama without having the addon so they chose not to raid.

Naturally everyone NOT in officer was shocked and speculative but I had a raid to focus on and we told everyone as the raid started that there had been an issue, and those who chose not to use the addon were not raiding, but we would go ahead and at the end of the raid we would talk about what had occurred for those who wanted to listen, which we did (and I remember laughing about the huge influx of people who jumped into the other channel when I announced that I would not discuss what happened and field any questions).

So by the end of the night, everyone knew what had happened, and that it wouldn't affect raiding, and that our plan was to continue and I would discuss with our missing raid members what they would like to do. In the end it took a month for me to make it up with Moo (though he did not return to the game or the guild) and we're all good now, but I learned many valuable lessons that day.

Firstly, I appreciated that the long standing members did not respond well to the "treated and punished like children approach" which I often use as I am a parent with young children. I won't make that mistake again. They responded better to the "Can you tell us why you don't like this addon? And can you try it just once and if you think you can do better without it, then that's ok but please at least try it?" approach.

Secondly, there was a culture change I was trying to instill and this actually worked in my favour. Does it not show a slight disrespect for authority when I am trying to instigate something that would actually be good for raiding and yet they refuse to do it on principle? What other raid team allows that? I had let it pass for a long time because it was "too hard" to fight them on these things, but allowing that merely encouraged them to do it and there was the risk that others would follow - "If so-and-so doesn't have to do it, then why do I have to?" Now, when we introduce an essential component for raiding, people now accept it, without question. Which is a win situation, despite the stress I had to go through to achieve it.

Thirdly, by being open with the guild and explaining everything to them, we garnered support for our cause. Those who raided said that they would support the decisions of the officers and would follow our lead, which gave me warm fuzzies, and made me feel like I had done the right thing (even though it wasn't done in the right way).

Now back to my friend, whose friends are fighting and fractured the guild. What should he be doing?

If that happened to me, and we were unable to raid because of the loss of raiders, I would tell everyone what had happened after we had raided (or attempted to raid) and ask if there was continued interest in raiding. If there was, I would look for people to fill the raid - or negotiate something where we could all go together. If there was no interest in raiding except for myself then I would suggest a break for all and let everyone know they could PuG if they wished as I would be pugging also. I would keep logging in every day though to show everyone that I was still around and willing to do stuff. As the guild leader, your priorities are to your guild, not to those who left you, even if they are your friends.

However, what if you wished to throw in the towel?

There should be a timeframe, like a warning, if you wished to disband your guild. There is nothing more upsetting than finding one day you are guildless without any messages or preparation from your guild leader. If it was me, I would personally stay and tell everyone myself, because the guild is my responsibility. I have had a different friend who disbanded the guild after raiding collapsed, sent a message to everyone and then transferred off the server (or name changed), but somehow the message got lost and suddenly a whole lot of people logged in to find themselves guildless and felt betrayed and abandoned. 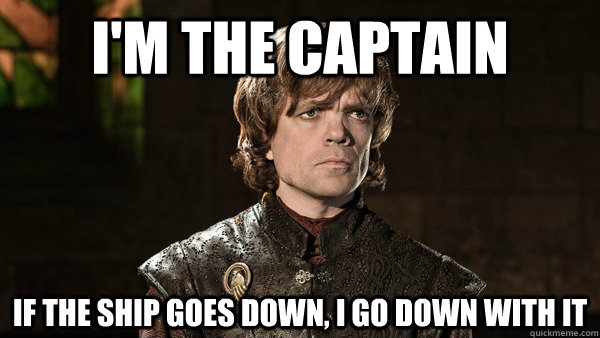 It's a bit like that old saying "the captain goes down with the ship", where a captain holds the ultimate responsibility for their ship and everyone on it and they will die trying to save either of them. That is how I feel about being a guild leader. I think everyone who wishes to take up the reins of a guild leader should be prepared to look out and ensure the best interests of everyone in their guild and make sure everyone is rehomed and looked after.

Now the question on everyone's lips - how do you keep raiding alive when you don't have the numbers?

For me, it's about networking. Scouring the forums, looking for guilds like ours. Having friendly chats to their guild leaders. Pugging with them to help out with their raids on my nights off. Finding out if they have nights off where they could come help us with our raids. I also use the forums like everyone else does to recruit, but I prefer to personally visit the person on their server to chat to them. If that appeals to someone, the personal touch, then maybe I've found the right person. We all know that there are tons more misses than there are hits when you go through forums. Many want more than I have to offer, others haven't got the relaxed laid back attitude I'm looking for, and others are just a wrong fit for the guild. There is a right fit for everyone

I'd love to hear how other people dealt with their dramas and created positive outcomes from them!