Raiding - Glory of the Hellfire Raider (Mannoroth and Archimonde)

Our Thursday achievement runs are going great! Peggy from Onineko has been coming along and it's been a great help (as well as the fact that Peggy likes achievements and it behooves him that I am above him in achievements in Onineko on my level 60 alt).

So now I can talk about the achievements on the last two bosses in Hellfire Citadel. For this achievement you really need 3 tanks.

When you start the Mannoroth encounter,  when the mob at the red Fel Spire is up a Curse of the Legion is put on someone. When the curse wears off or is dispelled, a Doom Lord appears and that is what the third tank needs to tank. The crappy thing about the Doom Lord is that he makes these Marks of Doom on a few people and after 15 seconds if those targets do not take damage or have these Marks dispelled, they will insta-die. If you do take damage, you get a Mark Eruption that deals big damage to all players within 20 yards of you (the purple circle). These Marks of Doom will keep coming the for the whole fight, so just keep away from everyone whilst you wait to get hit by something and make the Mark of Doom go away.

The poor extra tank also takes stacks of Doom Strike which does damage when the stacks fall off, so the tank needs to somehow trigger it at regular intervals to avoid taking a whopping big damage. Keep heals on that tank because they will be taking more damage than the other tanks. Probably a good idea to have one extra healer than normal to help deal with the extra damage going out by having the Doom Lord up. 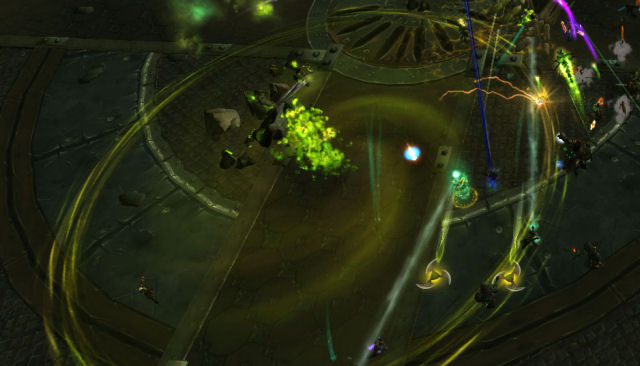 This achievement can be done by burning the boss as fast as you can, because you have 2 minutes after the last Allure is cast (which isn't cast when the boss falls below 45%) to kill Archimonde. So if you DPS the boss to 45%, wait till Allure is cast then bloodlust and burn the boss super quick, then you'll get the achievement, because all you need for the achievement is to have some fire on the ground.  However, our DPS wasn't that great, so we had to keep the Doomfire Spirit up for the whole fight to make sure we still had fire. What we did was try to keep the fire to one side of the room (we chose the right side) by making sure everyone targetted by Doomfire was running to that side. It was a bit of a rough trot, as we had move the boss in an anticlockwise manner to keep away from the fire but we got it! 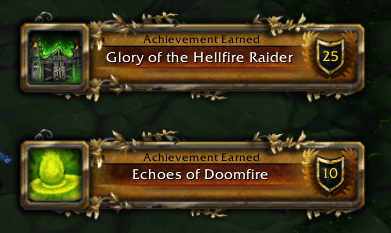 (I wonder if this achievement was a pun on "Echoes of Doom", which was the name of the last content patch before Wrath of the Lich King - patch 3.0.2)

So here we are (some of us anyway) who got our Infernal Direwolves, and we do look rather cool on them! Good luck to you trying to get yours, hope this noob's guide to getting the achievement helped! 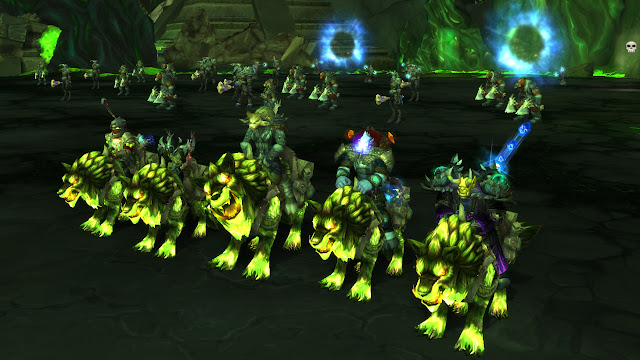