Keeping Thursday as a fun and relaxing raid has been a good idea. Guild turnout for our fun Thursday run was pretty good, though I did have to drag some people there kicking and screaming for a bit (and we were missing a few people too).

Last Thursday we had decided to do Highmaul. Due to being rather uninformed (I thought that you needed 14 guildies to make it a guild run but you actually need 16) we had some issues with getting our numbers for the run. However, people started trickling into the raid in dribs and drabs and half an hour into the raid we were full.

Some of the Onineko people have alts in Frostwolves, so CT and Nova got on their Frostwolves hunters (though with gimpy gear). That helped push up the numbers. I also had two trial recruits coming along and though their damage was very low (they did say they only wanted to be casual raiders for the remainder of WoD), once I invited them to guild (talk about an accelerated invite to the guild) they helped boost the numbers. What we were really aiming for was the Guild achievement for killing Imperator, so not having the 16 for the earlier bosses wasn't such a big deal.

It really was a cakewalk at our gear level.

We had already done Mythic Kargath like everyone else, so off we went to Butcher. You still die when you get stacks of that debuff, which everyone had seemed to forget, so with a quick step in and step out it went better.

Brackenspore was a little hairy - I don't think anyone picked up the guns, and we certainly didn't heal up the green mushroom - but we got it in the end. I know I did manage to heal up a blue mushy!

I died on Tectus the first time but I think we got it the second time. OMG red stuff everywhere, poor melee.

Twin Ogron was hilarious in that nobody did any mechanics properly and it still died. Everyone getting sucked into the spinny was not a healing highlight.

Ko'ragh was surprisingly easy though people kept killing the damn ghosts outside of the zones which made healing that much more annoying! And though Dan did soak I couldn't heal him and he died - I can't even remember if people did catch the balls or not, but healing that was slightly more intense!

Imperator was the hardest fight, and even that only took a few goes and only a basic understanding of mechanics (because there seemed to be a whole lot more going on there than heroic and even heroic had a heap of things going on). Firstly we walked in and there were no adds, and Cho'gall is doing something to Imperator with all this flashy red spell stuff. Cho'gall comes down at the end of the fight when Imperator is low health and that was something different too.

I had some birthday cake for courage before the fight. Thanks Tacky! 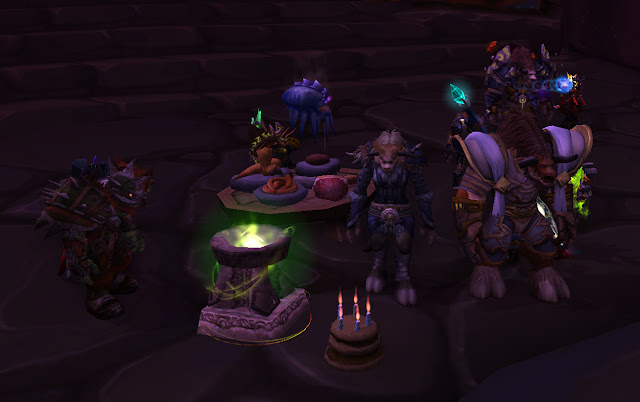 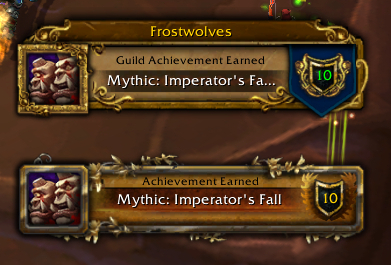 Not bad for 3 healing! And with the only main healer online being me with heaps of help from Crooked and McTacky, we managed to do it.  Yay we got our guild achievement!

However, Blackrock Foundry on Mythic will be a different story. We'll see how that goes!
Email Post
Labels: Achievements Highmaul mythic highmaul Raiding