Raiding - Finally Ahead of the Curve!

We had some good attempts - there was another 2% wipe in there - but it felt a bit more controlled than previously. Everyone was doing quite good damage and we seemed to be consistently getting to the infernals stage but that bit always seems like chaos to me.

With a warlock it was nice to have a gateway one way and a roar going back. With 2 druids we only had enough roars for 2 trips back and by the next one everyone had to run on their own. The bit I find hardest still is spreading out after the run for the Shadowfel burst, because trying to spread out, yet stay in range of tanks can be tricky. One time I was with Crooked and we ran together no matter how much we tried to get away from each other and we both got felbursted (is that even a WORD) and caused a wipe. Another time, I thought I'll be clever and hang back a bit and let everyone run past me, but I wasn't the only idiot with that idea - Rag has hanging back too. And of course, guess what happened... Doomfire fixated on him and the orb was on the far side of Archimonde and the fire went back through Archi and the melee to where we were standing. I remember HK yelling "OMG who did that!" and I was feeling super relieved it was Rag and not me!

We were pretty good on the Nether banishes too - very rarely did people miss them and the composition was good. In the attempts that night we had some issues in there with the orb - Kyxyn got knocked back by it and died which was the cause of one wipe. I thought I was doing a stellar job slowing it with Faerie Fire and kiting it around until Aimei told me he was the one slowing it.

Our kill attempt was a bit weird, we were killing things a bit slower than we were before. We actually had a 5th lot go into the zone when Archi was low and I went in again for sacrifice (I had gone in on the 4th banish for the sacrifice but the boss wasn't low enough to die) - basically the sacrifice group is composed of 3 players so that the Archi doesn't heal himself because we ignored the banish. I was running around trying to avoid the orb and kill the big shadow thing and I could hear everyone else on vent getting excited adn next thing you know - screen goes black and we're outside and achievement pops. Woo! I was sad that I couldn't see what was going on outside, but at least there is a video of it - Darkness made one:

Ecstatic was a mild word for what I was feeling. I was so happy - this fight which had been causing so much friction in the guild lately was finally over! Cheers all round to the raid team for finally pulling it off and getting that kill!

I rolled the gloves I wanted, Yuuda and Sev rolled belts, Rag rolled his Ret weapon, and heroic trinkets dropped which went to Kyxyn and Nok. The rest of the night was spent cleaning up the rest of Hellfire citadel but nothing could quash my mood. YAY! We did it!

In total, the guild did 83 wipes on Archimonde which is better than what we did on Blackhand (which was 156) and according to Ask Mr Robot at our item level the number of wipes should be about 20, but I don't mind - it's dead! 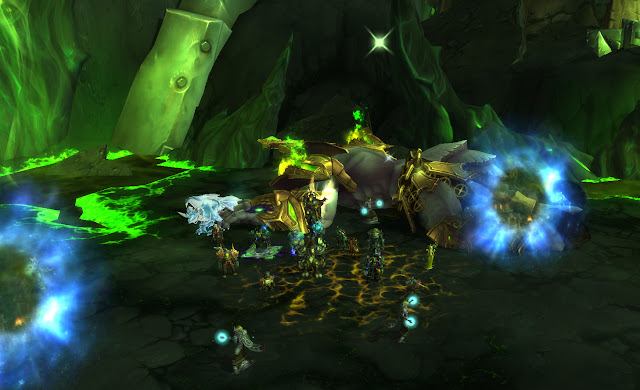 Naturally after the conclusion of raid, our question was - what do we do now?

I have said that we are not going to do Mythic. Which is true - we will not be doing Mythic as a guild. I haven't got the inclination nor the patience to recruit heavily to make a raid of 20 people - and not only that, it is unlikely that any of the players we would recruit would be long stayers. People out there looking for mythic guilds are generally looking for a raiding team and kills rather than a home to belong to, and that's not who we really are.

We thought that perhaps we could go back and finish off mythic Highmaul and Blackrock Foundry and tackle HFC when the cross realm hits. There might be another guild out there that has 10 people and wants to get some mythics done later - and that might be a good option if both guilds get along, but I know that those sorts of alliances can be tricky.  But with personal loot, drama over drops should be a non-thing.

But, that's thinking too far ahead. For now I will just be happy that we have our achievement and wonder how many people are going to be taking a break from raiding now that we have killed Archi. A lot of our guildies stayed to kill it with the guild and now that they've gotten it they will need a well deserved break.

And yes, I know that I will have to face this problem in 2 days. We'll just see what we have then! Well done Frostwolves!
Email Post
Labels: Achievements heroic hellfire citadel Raiding