It felt like we were doing something wrong all those previous attempts - so when we went and hit up Tyrant on Monday and it seemed to go quite smoothly, it was rather nice.

Mind you, we wiped once then killed it. Which was surprising.

I'm not sure what went differently.  Perhaps it was people NOT standing in front of the boss - the melee seem to like dancing around like idiots during phase 1 which increases the amount of damage they take.

The Edict was done better as well.  People were not dawdling around at melee killing everyone around them with the Edict, and the hunters (namely Ultra) were awesome when they jumped out at the last minute in Phase 4 with Edict and deterred the Edict on their own and didn't damage anyone else.  That was amazing from a healer point of view since we didn't have to do massive healing for that part. It was great! 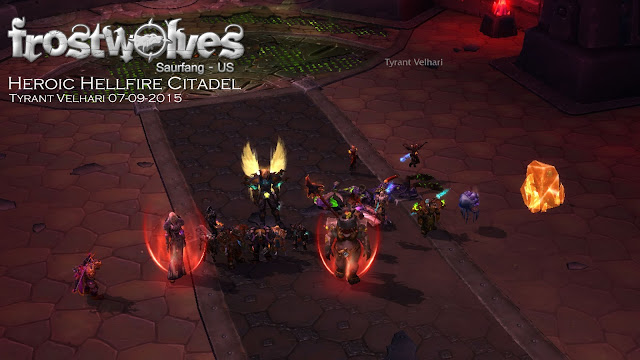 Then we had a few goes at Mannoroth, and we still haven't quite go the Shadowforce right (I didn't know that you use the white bits to slow you during shadowforce, but what a great idea LOL) but it was solid progress and it feels like we're getting better on it with a kill in sight in the near future.

I forgot to mention Archimonde at the beginning of the raid, which went well.  We are still on personal loot and perhaps we may change that to master loot in a fortnight, but I think for now we will still be doing personal loot.  There are a few people who haven't got their class trinkets yet - Duck was the only one who got his last night.

Looking forward to raid next week! It's my last full week of raiding before I go on holidays!  Hmm, I might need to set up some scheduled posts for the time that I am away....
Email Post
Labels: heroic hellfire citadel Raiding