Raiding - Now that was a good week of raiding!

It was a pretty good week this week!  Not only did we get Socrethar down on heroic on Thursday, we also managed to get Archimonde on normal so now we have officially cleared HFC as a guild! 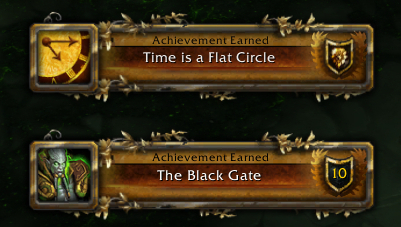 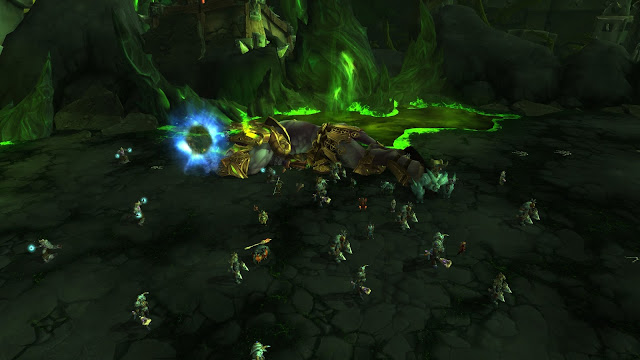 We did up to Gorefiend on Wednesday (which is also the last time we will be starting off with the first 6 - we now have our little bypass happening so we can go straight to the upper levels from next week) and on Thursday we did Socrethar and Iskar. It was good to get that down - trying to remember if I took a picture or not... I think I did.  I should go back and add that in later.

The strategy we ended up using was our normal strategy.  We did try to have everyone grouped on one side (Yuuda's strategy) but fires were just getting out of control and we were boxing ourselves in and taking unneccessary damage from fire and Chakram.  Eye of Anzu passing went very well (oh and by the way, if you drop off the edge with it, it respawns where Iskar's starting position is) and everyone had given the addon a good go, which is all I wanted, really. I am wondering if I am brave enough yet to try it without.

So we had two groups on either side and everyone was running to to the edge with their chakram which turned out ok.  I think in the end only Falln fell off early (LOL, ironic with his name and all) for the kill attempt and Ultra also had a death at the end because Sev held onto the orb for 3 seconds and let Ultra fall off with his wind.  I admit I was laughing hysterically about that - Ultra has been threatening to change his name to AAUltrapwnd so that he won't be at the bottom of the Iskar Assist addon when we order it alphabetically (since he always gets forgotten).

On Sunday we changed it so we now start at 830pm and raid till 11pm and so keen bean Kyxyn started the raid early and was clearing trash with everyone ready to go by 830pm standing at a boss. Interestingly, he had a plan of boss order kills that he put up as message of the day, and there was some good feedback about which bosses we should be doing first - with tier bosses being flagged as bosses we wanted to do early.  Adjustments were made and so that's why when I turned up we were at Xhul'horac to start off with. That fight is so bloody messy. I hope we clean it up a lot more before we attempt that on heroic.

Socrethar went down next and then we went on to do Tyrant, which was easier than I thought it would be given how confusing it was on LFR to understand. Poor Morz, his computer crashed as we approched Tyrant, and I said to him that we'd just do one pull first and then I'd get him back after this wipe... except that we one shot it.  Doh!

After that it was onto Iskar and then Fel-Lord and then we had our first guild look at Mannoroth. There were a few people who had done it already, and told us how "easy" it is.  I tell you, you feel like a real dumbass when you wipe to it after people say that.  So we did wipe once on Mannoroth before we got it down, and then everyone was excited because we were onto Archimonde.  Nok gave some really nice clear instructions for Mannoroth and that helped a lot, especially with stack points marked.

Sooo.... then we got to look at Archimonde.

It looks SO confusing.  There is so much going on!  Stack here, run there from fire, move your fire over this way, hit this orb thing, point your arrows out of the raid, stack up in the purple pool when people get shot in the air so we can cushion their fall with our bodies - but don't stand closer than 6 yards to someone or you'll get MORE purple pools and more people falling out of the sky, then run into the zone with the tank and kill the big add and kite a ball and then come back, dodge the infernals dropping out of the sky, don't get hit by ghosts, kill the adds then kill the boss....

Actually when I write it like that, it doesn't sound as bad as it felt.

People were keen to try it again on Monday and we persisted all night and we managed to get it when we dropped to 4 healers.  We also didn't send any healers in with the tank (which was just as well because it's a real poo-fight outside with healing anyway).  Yuuda went DPS and saved the day - I think Rag was jealous because he wants to DPS. I wish that my DPS was better so I could DPS and help out instead of just healing, but I guess people should be GLAD I'm not DPSing coz it's so woeful.

We had it on personal loot to maximise people getting things and we had quite a few people get loot - with Rowyn getting a personal loot AND rolling a bonus loot as well! Aimei, Aza got class trinkets, Yuuda got a staff and Kel got some gloves.  That's not a bad haul.

All up it was a really good week.  We will be starting from the upper level on Wednesday (since our best raid turnout and progression seem to be on Wednesday) and then it looks like we will have Monday for Archimonde after the Sunday run with some progress on whatever boss we're doing next (probably Xhul).  Great work Frostwolves!