Raiding - And that makes Ten

You know that feeling of stupidity that you get when people tell you how easy something is but you can't seem to get it even after multiple goes?

Well, we had that with Fel Lord.

On normal, it's easy.  I didn't even fully understand the mechanics of it and we just brute forced it. Something about pillars needing protection and don't get hit by purple waves emanating from the boss and from seeds and from tank.

So then we went to do that on heroic.  And NOW I understand the fight a bit more.

Those crystals and the person who soaked a swirly contain latent energy, and if the player or a pillar gets hit with Zakuun's purple waves (Wake of Destruction) then they do raidwide damage, so you don't want the pillars to get hit with Wake, nor do you want players debuffed with latent energy to get hit by wake.

And really, that's all there is to it.

Lots of thing make the wake though.  Fel Lord does it periodically. Tanks get sent to another zone and when they pop out they release a wake.  Seeds of Destruction are placed on a few players and they need to run the hell away from the pillars and people because they chuck out wakes as well.

Now it all sounds nice and easy doesn't it?  Oh and I forgot, there is a debuff (Befouled) that you have to heal off as well, and it also explodes once you heal it off, damaging playes 6 yards around you.  Melee obviously need to move away when the debuff is about to be healed off.

There are things I don't understand about the fight, and I'm sure I'll understand it one day. Crooked said it in raid and I have to admit, I had been wondering it myself.  We tank Zakuun right next to one of those pillars, and was that because people are standing between Zakuun and the pillar?  Or was it so people could have better places to put their Seeds of Destruction because if we were far from the pillar, where would those seed people go?

Anyway, after 2 0% wipes on Thursday we came back on Monday and got it down.  I was a shocker on Thursday, getting hit by Wakes constantly and dying.  I was better on Monday, but I still don't feel like the fight is quite right yet.  But it's dead, and dead is good. 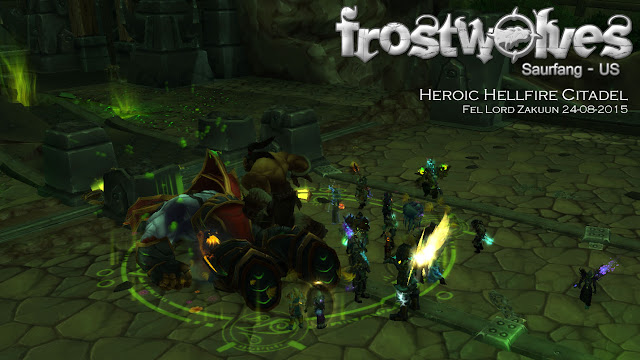 A friend of mine (the Guild leader of another guild) told me hat they killed it easily in only 5 attempts or something.  It makes me wonder if we have some fundamental flaw in our technique, or maybe everyone is still getting used to the encounter. And that is what got me down a bit.  How stupid are we that this easy fight took us so many attempts??