My daughter wanted to buy Batman: Arkham Knight on PS4 to play so I was playing (well, I was sitting down with my kids watching Aimei playing Arkham knight) and he was up to a bit where Poison Ivy was being taken into custody.  I looked at her outfit and couldn't help rolling my eyes.

What on earth is she wearing - or rather, not wearing?  What a dreadful outfit.  There is no reason why she should be dressed like that.

No, this is not another one of those "treat women with respect in games" posts, though in a way it is, because my daughter wanted to play this game, and this isn't particularly what I want her to be thinking is normal, or practical for heroes or villains.  Batman isn't wandering around shirtless. Admittedly, Catwoman doesn't either.  I guess because they both are fighting.

What was amusing was that I didn't even have to say anything to my daughter about Ivy's outfit.  She said to me "I can see her belly button, mum."  I said to her "Do you like what she's wearing?"

I wish she had also said she should be wearing pants, but it was one of those half body shots that she was watching at the time so she may not have noticed she was wandering around in a bikini bottom.

It reminded me of something Chris Metzen said at Blizzcon, when his daughters were watching the final scene in Dragon Soul where the aspects come up to Thrall and Agra.  They said to him "Dad, why are they in bikinis?"  His answer, was an abashed "Umm, I don't know."

And then they were talking about Overwatch and I thought I think they've made some headway here, we actually have a whole range of girls to choose from from fully armoured to fully skimpy.  So everyone gets to pick what they like! Who wouldn't pick Tracer?? :D

Interestingly, right after I stopped watching Arkham Knight and went to go play WoW (and do some PvP with Sev, Shab and Scruff), I decided to buy my Conquest chest to replace the Wild one I got from my Ashran weekly cache.  Those wild ones don't give you set bonuses and I had two Wild items and thus had broken my 4 set bonus.

Anyway, I put it on and I was wearing THIS: 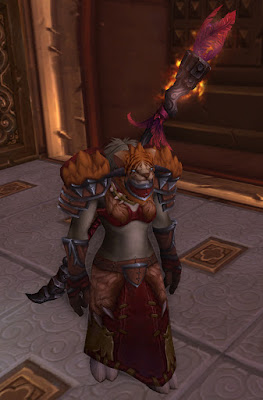 I know some people will think it looks great, especially on a night elf, but you know I'm not a fan of this kind of outfit!!!

So I hunted around for a shirt to wear underneath and this looks decent now. 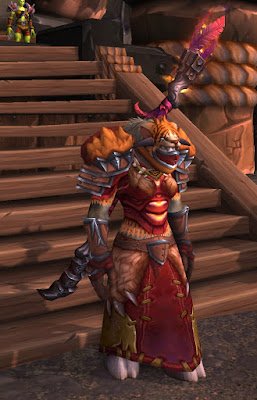 So this post is just to say that I'm glad my daughter is on the right track.  Now, to make sure my son is on the right track too. I'll tell him how silly it is to have girls parading around in their underwear when they're supposed to be fighting - it's ok for the beach or the catwalk though!  Which is why mummy's character is fully clothed when she is playing so she doesn't get hurt so much /grin
Email Post
Labels: Navi's thoughts