Raiding - The Fat Controller is down!

Operator Thogar - otherwise known as the "Train boss" - was our plan for the night.  Hwired had actually put three bosses up as possibilities but I only watched this one and it was a pretty cool fight.

In fact, all these train fights are pretty cool.  I wish I could get my son to see these fights, since he loves trains so much.

This fight is fought on 4 tracks, and a train will come out of one or two of them and you have to dodge it by moving to other tracks.  Getting hit by a train is almost a death sentence.


There is a cool addon that Hwired had that announced which track the train is coming on.  I didn't look at the raid warnings or listen to Hwired, but that was only because I was watching the doors. When the doors open, the train is about to come, so facing the doors was how I saw which train was coming.

The trains come in the same pattern every time (just like you expect a timetabled train to be!). So after a while it was easy to get a rhythm going.  There are of course adds and bombs and plasma circles to watch out for, but the mechanics of it are quite easy.

There is a "split" phase where two trains come and block off the middle of the room (see pic above) and we have a two group split for that.  The first time we go to the second round of the split phase our side had a shock because a train came rocketing out of the track and smashed half the melee (which didn't do that the first time we had the split).  But the train in front had left at that stage, so the next time we reached that stage it was a breeze - when the train left in front of us, we moved to that track and it was great.

Gosh my healing was crap that fight!  We had Koda, myself, Nok and Bish healing, and it went OK - most of the damage was avoidable except for tank damage and Iron Bellow which was when we had to use our cooldowns.  Those Man-at-Arms dudes really hurt!  Kill them faster!!

It was on our lucky 13th go we got it.  Koda and Kelthal had shockers with the trains! K is for killed by train! 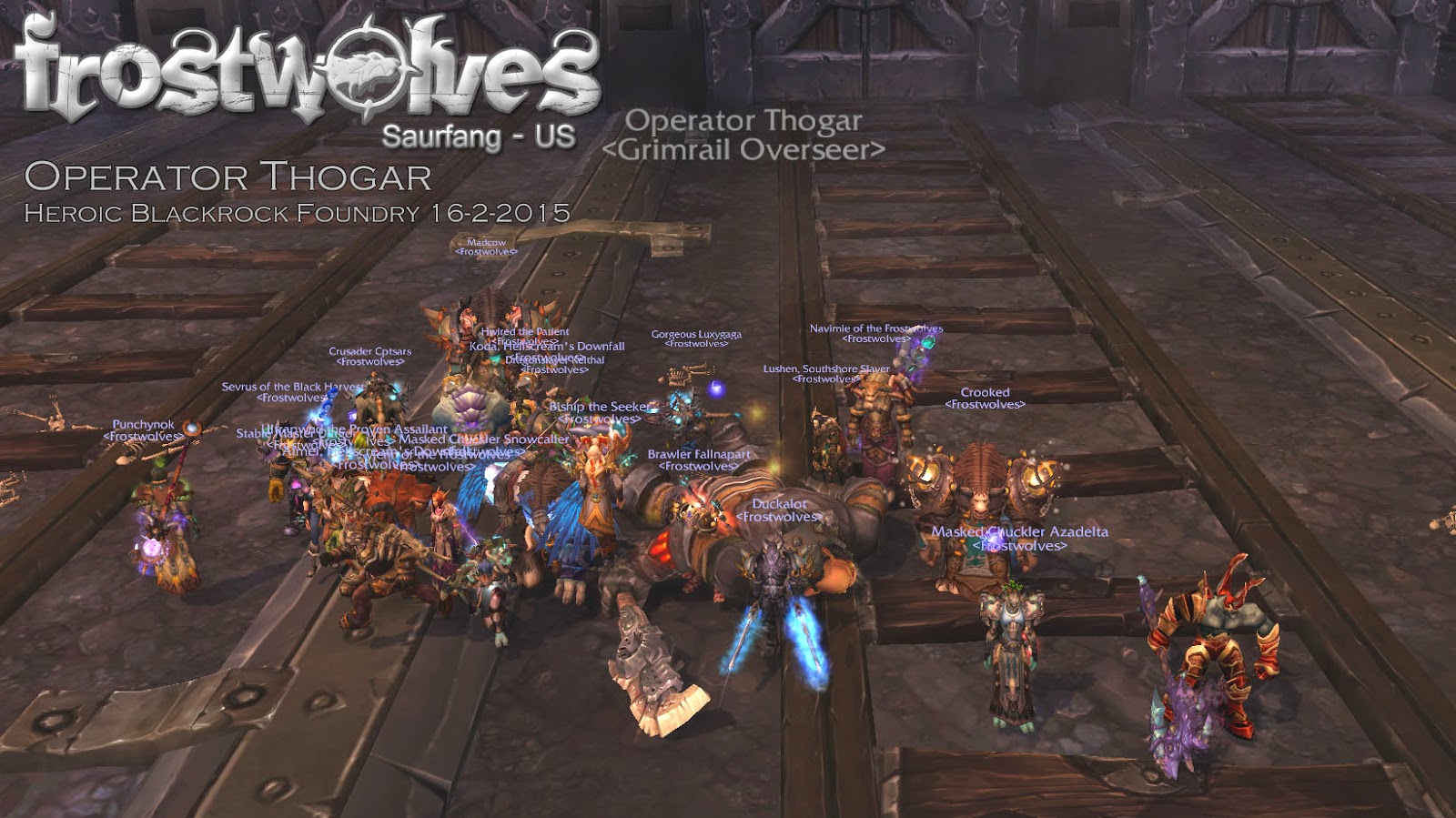 More lovely tier to go around - but this time it was Vanquisher and Conquerer (those poor guys in Protector!) who got it.  KyXyn got his 2nd tier piece, and Duck got his piece also.  I was happy because I managed to roll a belt with a socket!  Everyone was feeling good about the kill and we were happy to get that down so easily.

We still haven't figured out Oregorger.  I am sure there is something easy that we're not doing quite right, but we'll figure it out!  And it's funny, we've killed more bosses on heroic than on normal! I think it's time for me to PuG some normal BRF runs.
Email Post
Labels: Blackrock Foundry heroic blackrock foundry Raiding