Advantages to Ashran being stupid at the moment - achievement hunting

Ever since they changed the battle so that it's half an hour between battles, it's as if people have decided to not bother trying to kill the opposite faction leader anymore.  All people do now is the events, endlessly.

Actually that's not quite true.  This is what has been happening to ME lately in Ashran.

I enter Ashran to find Alliance killing our faction leader.  I get invited to group and find everyone is one of the events whilst Alliance get their easy kill.  Of course, Fangraal is up so I after they kill our faction leader the NPCs and a few other people who just zoned in can kill Fangraal for our 25 conquest points.  So now it's 30 minutes before we can start the march down the middle.

People finish the event and go and hand in their Artifact Fragments and then summon Kronus, then start heading down the path to go storm the Alliance base.

Then it can go one of two ways.

We get to the Alliance base and the new game starts and all the NPCs respawn because we have none of the flags capped along the way and we all wipe and Kronus dies.

We get to the Alliance base and an event goes up and everyone rushes to that, leaving poor Kronus by himself to fight all the Alliance, which means he goes splat and they all get an easy 25 conquest points.

By this time we have wasted our Kronus, the game has started and Alliance marches down the middle with their Fangraal and kills our commander... AGAIN.  Then the cycle repeats when the game is on the half hour cooldown and I'm left bashing my head on the wall wondering why I am wasting 2 hours in here.  I might as well go do the events too.. oh wait, I'm capped.

Why am I in Ashran again?? Oh right, Achievements.

I thought this was as good a time as any (whilst we were on the 30 minute wait) to go and try to break those prisoners out.

I had been in the prison once before - a paladin had caught me running around their side and I got sent straight to prison.  I didn't realise that there was an achievement to break out the other people in there, or I would have done that.  Instead, I tried to sneak out.  Not clever.  Not when there's a room full of Marshals just above the prison. I tried to go out the roof but someone saw me and killed me.

And I had tried to get back in there multiple times, but to no avail. Each time I would get close, I would die and my insignia would be taken so that I would have to rez at the spirit rezzer.

Luxy told me that I could fly in there.  I had totally forgotten I could fly in Ashran if I had the book of Flight form (which is looted from the rares in Ashran).  So I flew over there but I couldn't get into the building.  I tried stealthing but I didn't get far and then I'd die and my body would be looted.

Crooked told me to corpse run and get as close as possible and I could rez inside the dungeon.  But I couldn't get close enough.

Luxy said I could try flying in the windows on the side of the building. Ohhh, I know those side bits, that's where I tried to sneak out but didn't manage to escape.  It was easy to fly to there and jump in right next to Grand Marshal Tremblade and get killed.  Fortunately, with the hiatus nobody was inside the building so I could corpse run back and go immediately to the dungeons below her and rez there.

The cool thing about the dungeons is that there is a scroll of Town Portal on the floor in the prison, so I could get out quickly if I wanted to.  I don't know why I didn't do that the first time, I was probably busy exploring or something.

So this is what the dungeons look like.  There are 3 cages and 2 gaol (this is how we spell jail in Australia) cells.  The gaol cells are not locked and you can click on them to go in and out. 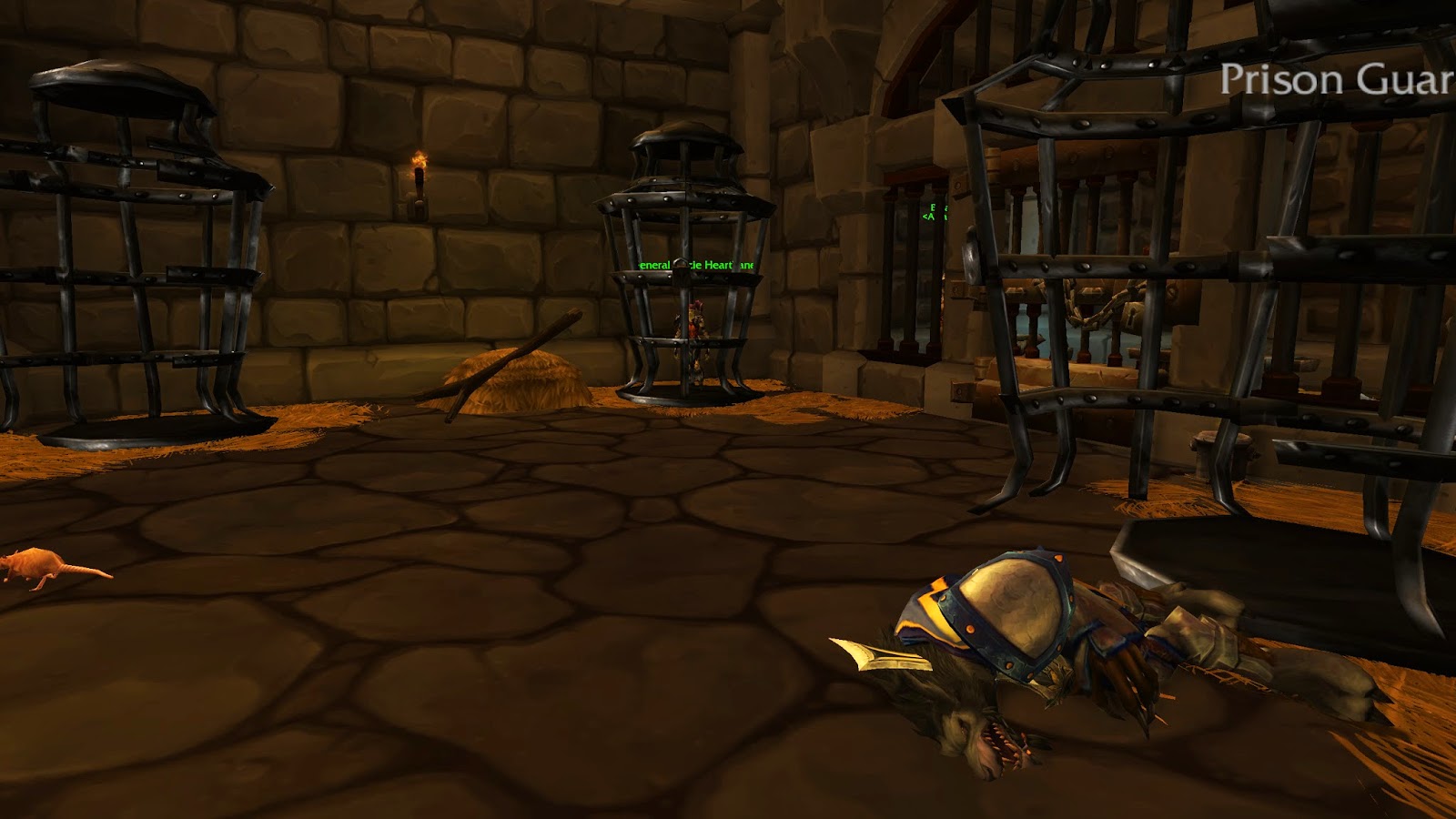 You need a Stormshield Prison key to open up those cages, and it is kept on the Prison Guard (seen dead here in the picture above).  He respawns every 10 minutes or so, so you can keep killing him to get another key so you can unlock all the cages.  He's quite easy to kill.  He's just outside the door to the prison so you can easily pull him into the room and kill him without being disturbed by adds.

So the three people you have to rescue are:
Now one interesting decoration I noticed here was this here steaming cup of coffee... 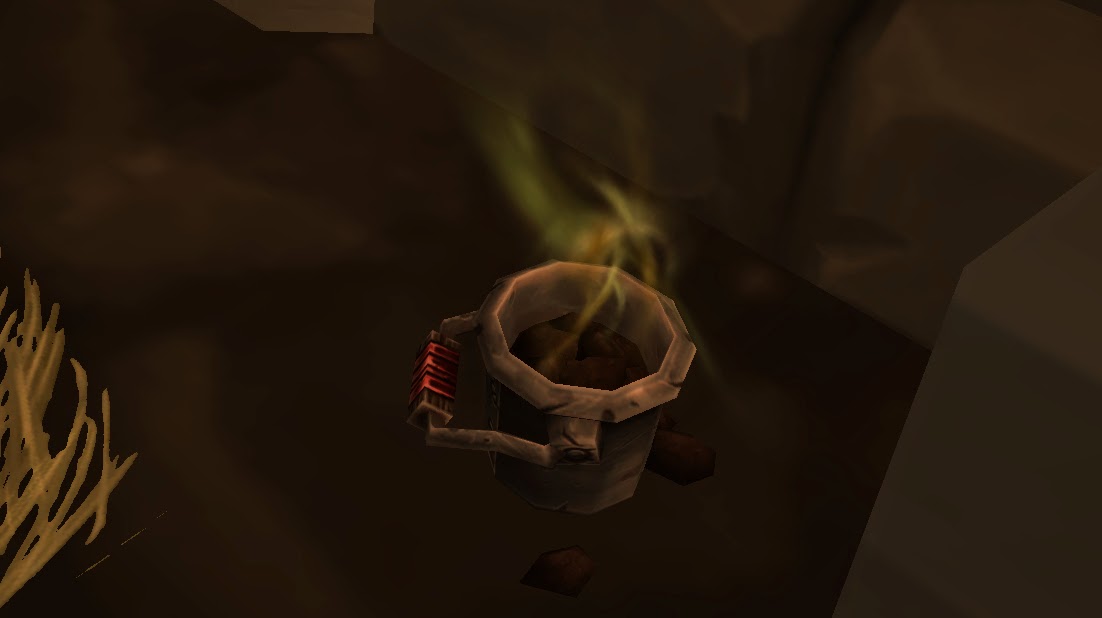 OK, I am not that stupid, that's no steaming cup of coffee... it's a chamber pot with a nice steaming turd in it.  There is one in each gaol cell and also one just by the door of the gaol cell.  Lovely.

But at least, I got my achievement.  By the time I was done, the battle was up again.. and Alliance was marching down the Road of Glory.  Time to go to my Garrison, I thought.  At least I managed to accomplish SOMETHING in Ashran that day.
Email Post
Labels: Achievements ashran