The Top 3 Draenor Quest Achievements that I'm glad are over

Unlike those Draenor Quest achievements with friends I wrote about earlier in the week, these achievements can be done alone, and are actually BEST done alone. They are also only able to be done when doing the Apexis daily (or if you are on the Garrison Campaign for that area) which means you have to compete with all the other people around for the items... FUN.

Some are not so bad, but these three were the worst ones in my opinion, and I am glad that I never have to do them again! So here they are! Feel free to comment if you agree, disagree or have an even better one that you thought was a pain in the butt!

Ogres obviously love to eat meat.  I was surprised that you couldn't find Delectable Ogre Queasine around here as well just so I could feel queasy whilst looking at poor little ratties skewered over hot coals.

These bloody things have regular spawn points but the food that spawns there is randomly one of these three foods: Rat Skewers, Charred Boar Chops or Toasted Roach Crunchies.  Only one of them sounds yummy, really. Strange that they're listed as NPCs on WoWhead too...

In general, you'll find them inside the ogre houses/towers on what looks like an indoor barbeque (wow that word looks so wrong, so used to just writing BBQ) - see pictures above.  Oh, autocorrect is telling me Americans spell it barbecue!

Back on topic... I have also seen it close the lava in the open flat ground with cages where there is a big bonfire - there are two that spawn along the edges of that area. Flat stones that could be low tables also have been noticed to have food on them.

People describe jumping between different servers to do the achievement, and I think that's a cool idea if you have battletag friends on other servers, I think it's a bit crap if you join an instance group through group finder and just use them to get your achievement and not help them with what they were originally asking you to do (unless of course they make a group saying they are looking for cross server quest achieves)

Now this achievement is just... LONG.  You don't have to wait for special respawns (well, not really) because all the things you need are right there in Shattrath Harbour.  Look at all these bodies! 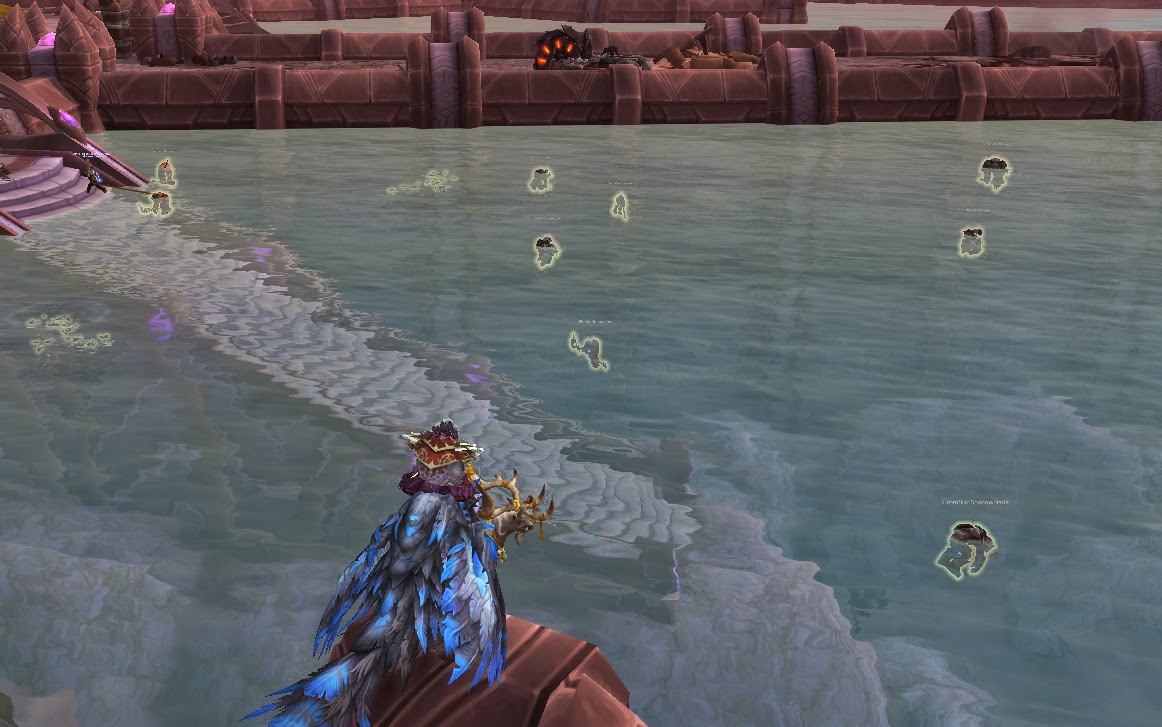 Unfortunately, the achievement is a real drag - pun intended.  What you have to do is tow these bodies to the steps, and when they're on land, you burn them.  Doesn't sound so bad, does it? 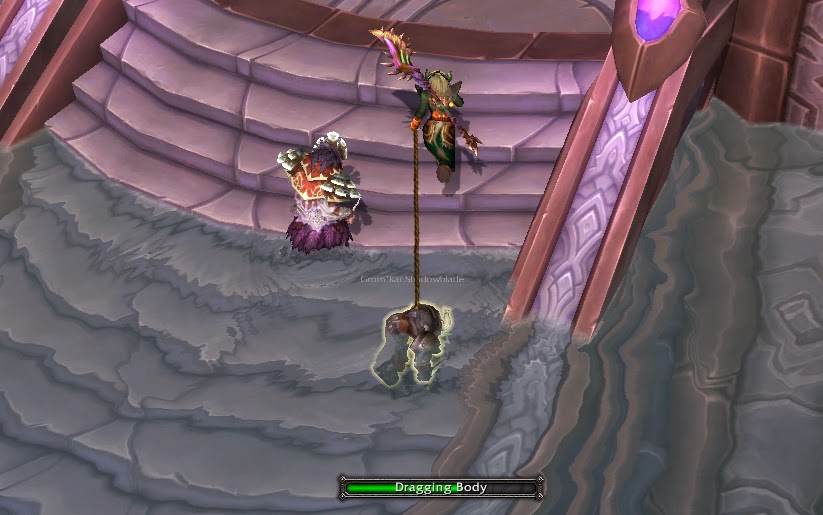 That is, until you realise that when you drag a body it moves 10 yards if you're lucky! Then you run back, click it, drag it another 10 yards... this achievement could take all day.  The secret is to get the bodies that are floating near the steps so that you don't have to drag it so far.  I did one body that was far out to sea and it took me a good 10 minutes to drag it into shore.

There are three steps at the harbour that you can do it at, and the best way is to keep running between them to see if any bodies have respawned on the steps.  The day I did it, Cptsars, Aimei and I were all doing it and another few people as well so it took us a while to get our bodies.  I whispered the other guy doing it when he said he had only 3 more to go, and he told me he couldn't wait till he "never had to do this piece of #$%@ again".  LOL. I know exactly how he felt!

When I first started this, I never saw an Orc inside a cage - I only ever saw Draenei! For a long while I had only seen one ever, and Aimei clicked it - darn it those things are not shared! Then, after one patch it was as if they fixed it and now we would actually see Orcs in cages!  You can see how they're highlighted - it made it heaps easier to spot.

There were a couple of good spots that I found that were good for cages.  I took some screenies to show that these cages do exist!

Another good spot was down near the rare, Tor'goroth, as there definitely a few cages there, and if you're lucky, some might be horde cages. I would often wish the Alliance would come and open up all those Draenei cages and maybe the cages will respawn as Orcs!

Luxy managed to do hers on a PvP server (she said she got 30 in a day!) but I managed to do it on Saurfang, in the early hours of the morning and late at night when the daily had just changed.  Just be persistent - it won't be long before people get sick of doing their Apexis dailies and you'll have the place all to yourself.

Good luck on your achievements and hang in there!  They're annoying as hell but they can be done with a little patience (or a LOT of patience!).
Email Post
Labels: Achievements Draenor Quest Achievements