Ko'ragh required a little more coordination than any of the previous bosses, and it took a little tweaking to our technique to get it down as well!

This boss does a lot of magic damage in different forms and also has a shield that needs magic damage to burn down.  Once that shield is down he runs into the middle and charges up again.  One of the DPS (we were using hunters) can run into there and get the shield too (but have to be healed massively to be able to do that) and then when they have the shield just like Ko'ragh they can run around and soak up bouncy balls (just like in Blood Prince Council in ICC).

The boss also does a bunch of other damage things.  Expel Magic: fire puts a debuff on everyone that does damage to others when it expires if they're close than 4 yards, so all the ranged need to spread out.  The melee however, need to be dispelled but they can spread, be dispelled then come back and hit the boss again.  Expel magic: Arcane is on the tank and they drop exploding arcane circles on the ground and take 100% more damage, so that's when they tank swap.  Expel Magic: Frost makes a frost orb that you have to get away from (it slows you as well - Stampeding roar is great for getting out of it) and Expel Magic: Shadow puts a debuff on everyone that absorbs healing, and so we're supposed to use healer cooldowns for that part of the fight.

Ko'ragh also runs at someone and smashed the ground where they were, leaving a supression field where anyone inside is silenced.  We use these to kill the adds that come when Ko'ragh runs to the middle to charge his Nullification Barrier.

It took a little bit of tweaking.  First, the melee had to get out of the middle when Ko'ragh runs to the middle so they don't accidentally get the Nullification barrier too.  Once you get it you can't get someone else to get it, and you can't step out of it.

Secondly, how we were handling the adds was also not quite right.  When Ko'ragh runs in to recharge, little ghosty adds come out which have to be killed but when they explode they do a lot of damage so you get them trapped in the suppression fields and kill them in there.  At first we had everyone stack up behind those zones, but we seemed to be having difficulty getting the damage out to get Ko'ragh's shield down.

So we made a slight adjustment after a few wipes, and only got the melee and the healers to stand behind that suppression zone whilst the ranged went all out on the boss.  That worked better.  Another tweak was to spread people right around the room instead of a little crescent close the starting area.  That was a lot better too.  And also telling people to get away from the walls so we could actually have room to stand behind the nullification zones was also very helpful LOL.

So yay, that was the 6th boss down on normal for us!  This time I managed to get a picture! 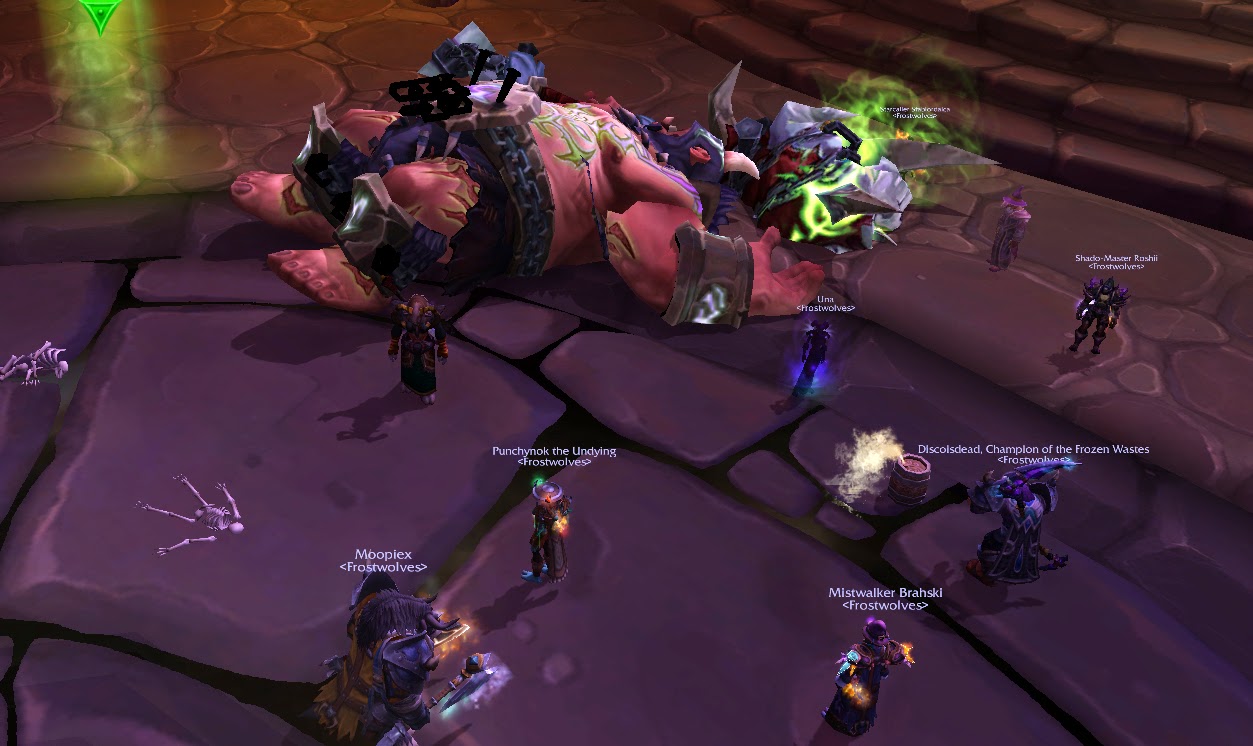 Imperator Mar'gok will be a doozy - watching that video looks so busy!  On Friday Exray, Aza, Alca and Una went with some friends and did it, and Sev's friend Scruff (who has cleared heroic Mar'gok) offered to run me and Sev through out so we can learn it, but Christmas parties are stuffing up my fight learning opportunities so I will have to take a raincheck on that!
Email Post
Labels: Highmaul Raiding