Regrets on rapidly levelling to 100 and some fishy tales

The start of this post is probably a bit of a misnomer.  I wasn't lightning fast, hitting 100 in a day, but I managed to get to 100 by Sunday evening. Considering that 6 hours of playtime was lost because of launch server and instance crashes, as well as the whole server queues debacles, I think that it was much faster than any other expansion I had levelled in.

I have levelled with HK/Aimei every single expansion. The first time I happened to have had a week off work and he had a lot of free time so I had someone to play with.  In Lich King, we just continued the same. By Cataclysm I was getting really lazy and he was driving me around on the bike (yay for 2 player mounts that came out in Lich King) and in Pandaria I was just blindly following and killing whatever he told me to kill. In reality I am a really frustrating person to level with because I often forget to pick up the quest item, or haven't finished the quest and we're back at the quest giver and HK will be like "YOU said you were finished??"  and I'll sheepishly reply "I was finished - with that pet battle!"

One thing I regret is not reading the quest text.  I skimmed it all in my rush to pickup stuff that I feel like levelling was not the immersive lore experience that I've had previously.  Granted, I tended to have a much better feel for the story when I was questing for fun (ie to finish achievements) and not when I was questing to level, so my perception may be skewed somewhat. I wish I had screenshotted more things - including rare spawns, since they are only rare ONCE and then ever after they are not rare ever again.  It was impossible to screenshot them in the launch period with people swarming like starving piranhas over a lone carcass and I think that I might actually enjoy questing with Minndy as she absorbs the zone and the story and screenshot all those little scenes where I missed my moment to screenshot stuff.

Another thing that people have been talking about is what happens at the end of Nagrand. I hit 100 whilst in the Spires of Arak so I stopped questing after that and started hitting the dungeons.  Probably a mistake on my part, as higher level gear drops in Nagrand and I probably wouldn't have to farm so many dungeons if I wasn't lacking so much in my ilvl.

Because I feel this PRESSURE to start hitting heroics, I'm not really doing the things I want to be doing.  I want to explore Ashran more. I want to do BGs - I hear that if you do well in a BG you get a box of loot or something that can contain PvP gear.  I want to go out and pet battle and collect all the pet things! Fortunately I can still use my spare moments to do things like fish and cook, and doing those has made me feel like I'm achieving something.  Fishing for these 100 enormous fish species achievements has been rather relaxing IMO.

And look at the hilarious things that you can get whilst fishing.  These two hats have a 7 day duration and look hilarious when you put them on! 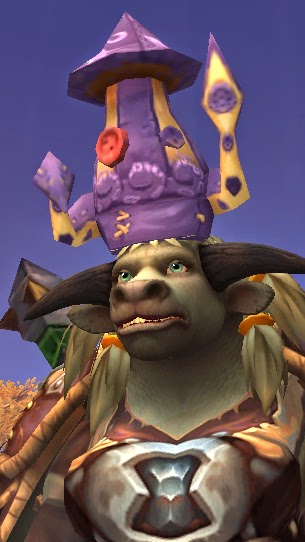 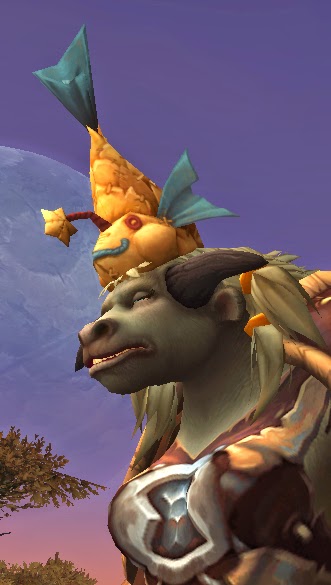 Tentacled Hat (left) and Hightfish hat (right) were fished up by me when fishing inland water. The Tentacled hat was caught in Frostfire ridge as I was fishing for Fire ammonites, and the Hightfish hat in Nagrand.  These hats are GREAT for fishing bonus - they only last one week from when they are caught though, so having them is good for fishing for the achievements as having a fishing skill of 900+ means you'll pretty much only catch Enormous fish. And don't forget to put the right bait on too!  The annoying thing about the bait is that it's unique so I can only have one of them in my bag at any one time.  Would be useful to have  a nice stash of bait for those long hours of fishing.  The plus to all this fishing is rapid levelling of cooking.  I have always fished and cooked hand in hand, so after I do the next round of fishing achievements, some lucky person can use all my fish to level their cooking too :D

Oh, and I forgot to mention the Frostwolves first 3 to 100 - big cheers to James, Luxy and Raverager!  I think that deserves a comic, don't you?  If only WoW Model viewer was working properly!