How my 6yo daughter has fun in the Garrison

Garrisons really ARE the central hub for everything in WoD.  When you can get into them, that is. It feels like every 4th attempt to hearth to your garrison or log into the game you can't get to your garrison (and then your garrison hearthstone is on CD) or World Server Down messages come up. My guildies tell me it's because oceanic garrison instances are full and just keep trying, you may get in as someone else goes out of it.

Listening to people talk about the "best" order to do stuff gives me a headache.  Want to raid?  You should get a war mill.  Short on garrison resources?  Well you should have started with a lumber mill.  However, I have this ridiculous notion that as a druid who has a tree form, it's kinda wrong to be out there chopping down trees so I can trade lumber for garrison resources and Apexis crystals. Yes it's just pixels but it's the THOUGHT of it.  So there will never be a lumber mill for Navimie.  But I made a trading post instead, and hope that I can trade away all those useless ores that accumulate indefinitely.  Except that they're always asking for herbs.  Why can't they ask for fish or ore? (I take that back - they asked for ore today, yay!)

Some of my guildies are already talking about how they've outgrown the usefulness of some of the buildings and they switched over now that they're good for resources and all their followers are 100. I am very lazy with missions, I must admit.  I should be doing them, but I am not as vigilant with it as I should be.  And I haven't been taking my bodyguard out much.

I'd much rather be fishing.  I've been enjoying that a LOT.

Fishing in my garrison is fun. There are even little stools for me to sit on whilst I fish!  I have my level 3 Fishing hut and Nat Pagle is in it, I can catch all the Enormous fish in my own garrison as well as have a chance to catch the Frostdeep Minnow which you can use to summon the Frostdeep Cavedweller, who drops lots of play fish like Awesomefish and Grieferfish but also worms and maybe even a chance to drop Nat's Lucky Coins too.  And, I can even invite friends over when I'm fishing to come and they can come and kill the murloc and loot his stuff too!  I've been giving away awesomefish to people who don't fish so they can get the Everything is Awesome achievement.

But, surprisingly, there are a lot of fun things that you can do just bumming around in your garrison. And it was my 6 year old daughter who found all the fun things you can do. 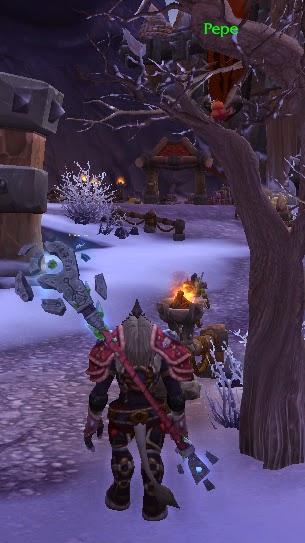 Pepe is a bird who sits in a tree near the main building.  I had seen guildies talking about it, so I knew it was there, but my daughter was IMMENSELY excited the first time she saw it.  She is now an expert at jumping and clicking on it so we can have Pepe sit on our head, and even though she has done it many times, she still loves doing it, and even made Uncle HK come and take a picture with her when she had the bird on her head, insisting he do it too. 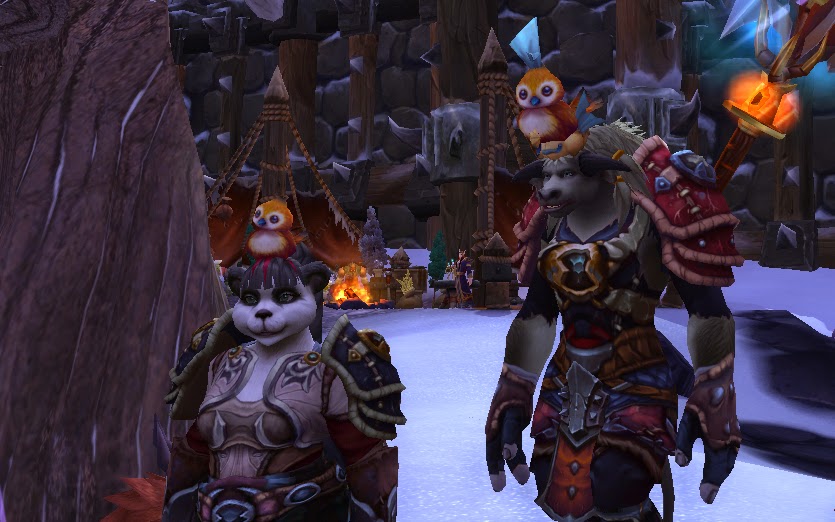 All your favourite pets wander around the Garrison as well.  My daughter knows some of her favourites and when she sees them walking she loves to follow them and show me what adventures they are exploring.  My Kun-Lai runt, named Jojo (after Jojo from Admiring Azeroth), is one of the pets tagged as a favourite and I swear, everytime I am in the garrison doing something and she sees Jojo walk past, she will squeal and insist that I go look at Jojo and give her a hug. 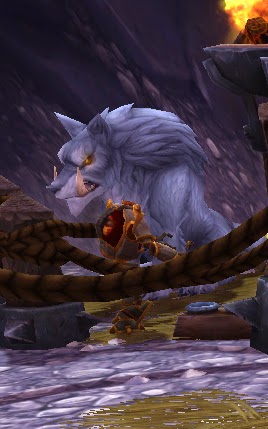 There is also the wolf in the garrison, and you can pet him and he will follow you around the garrison.  Another favourite thing of my daughter's to do. See, it's nice to pat friendly dogs and wolves. If you're nice to them you can be friends.  She likes taking him for a walk around the garrison, like walking a real dog, and she even RP walks nice and slow so he can keep up.

She also likes having one of the followers patrolling with her around the Garrison.  Personally, I like having one of the orcs to hang out with but she seems to enjoy having Blook around, even though, like Tome of the Ancient, that big guy just gets in my way, he's so damned huge.

I mentioned before I like fishing, but she likes to sit on the little stools to fish, and also likes to take my toon for swim in the lake.  I showed her the cave that was down there and she thinks it's really neat, and that I should hide treasure down there.

I've shown her how to pick herbs and mine ore as those gathering profession things she's always enjoyed doing, but I've never really got to do those things on Navimie because Navi has no gathering professions. Personally, I find the mine rather tedious but she thinks it's a great treasure hunt, finding the yellow dots and mining them.  She thinks picking flowers is a great thing to do as well, especially since they're all sitting there nicely in flower pots, ready to be picked.  Even the creatures that spawn are good to kill, I told her, because they drop even more flowers, and she knows just to hit 1 and 2 until they die.  She also likes to look in the "treasure box" where the Garrison resources are, to see if there are any more resource treasures inside.

She doesn't know how to do follower missions, or make work orders or buy transmog items, but I bet if I make a second garrison, with a stables or a barn, she would have great fun in there too!  So you see, if you get bored, you just have to look at the Garrison through a child's eyes, and you'll find all manner of wondrous things there!