I had been excited ALL DAY thinking about this event as it was THE DAY!  I had organised someone to cover me at work, I had worn what I was going to wear to the event TO work... I was set! I hadn't thought about dinner, but I would have been too excited to eat anyway. 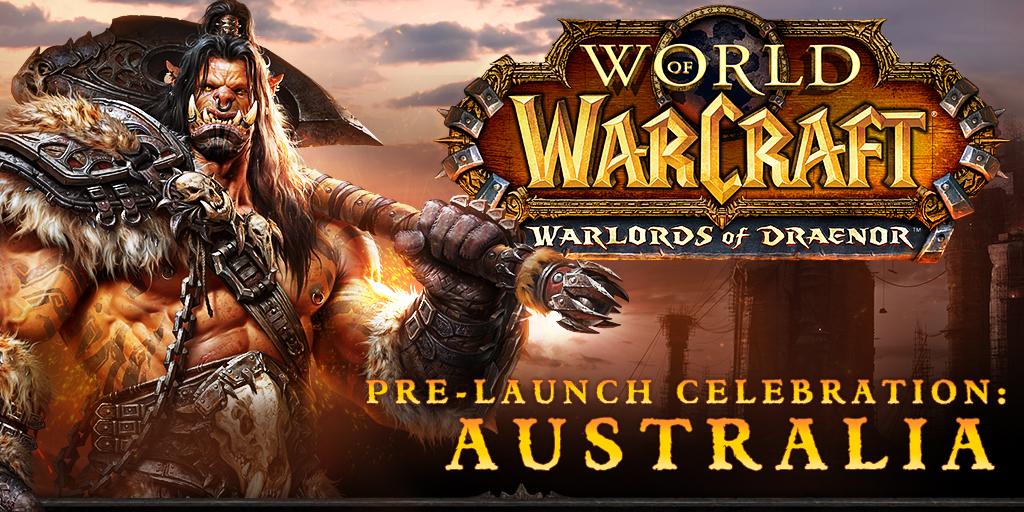 So, at 4pm I left work, after handing over my patient to my friend to finish for me, and headed home to get the train in.  I met up with Aimei/HK and then we hopped on the train.  Neri was already in the city, Exray was making his way in with Lushen and Consti, and Cymre was also heading in.  Moo and Natanie were already there!  Lacrox was slowly dragging himself in, and he asked us to save him a seat.

We headed straight into the cinema and ran into Neri, so we went and lined up on the stairs - there weren't that many people, fortunately.  I expected more!  I guess that's the good thing about limited tickets.  I felt guilty for not talking to people around me, so I decided to be friendly and chat to random people around me.  Luxy would probably laugh at me, because next thing you know I'd be inviting them to flex or to the guild....

But I finally met Natanie and Moogyver in the line!  Lots of squeals and hugs!  I heard that Dayani of Heliocentric was around - Neri pointed her out to me but I was too chicken to go say hi in the big queue, I thought I'd try and grab her later. 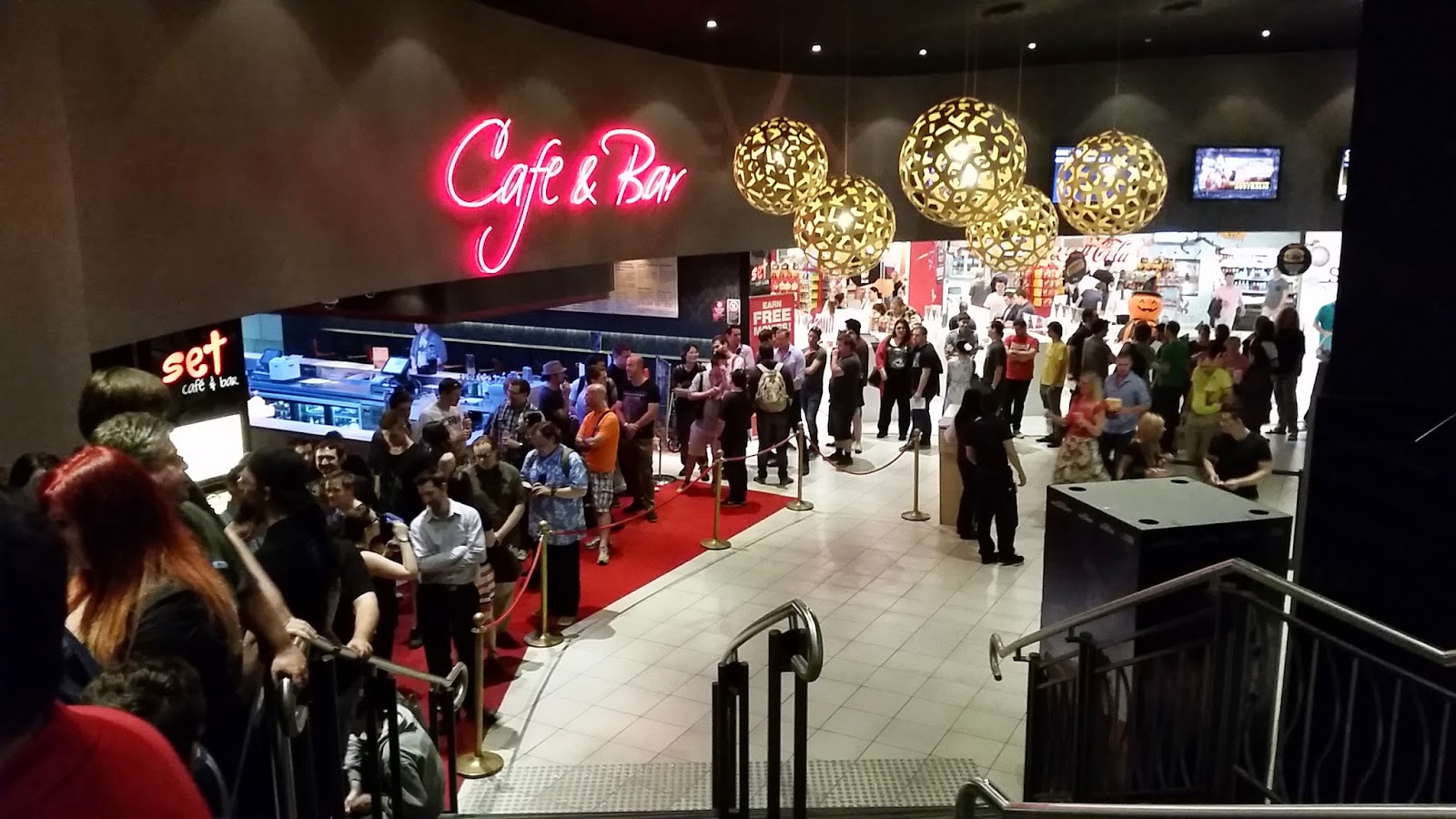 And how cool was this, they had a DARK PORTAL to walk through to enter the cinema!  Off we go to Draenor!  I didn't get any good pics but here's one HK took. 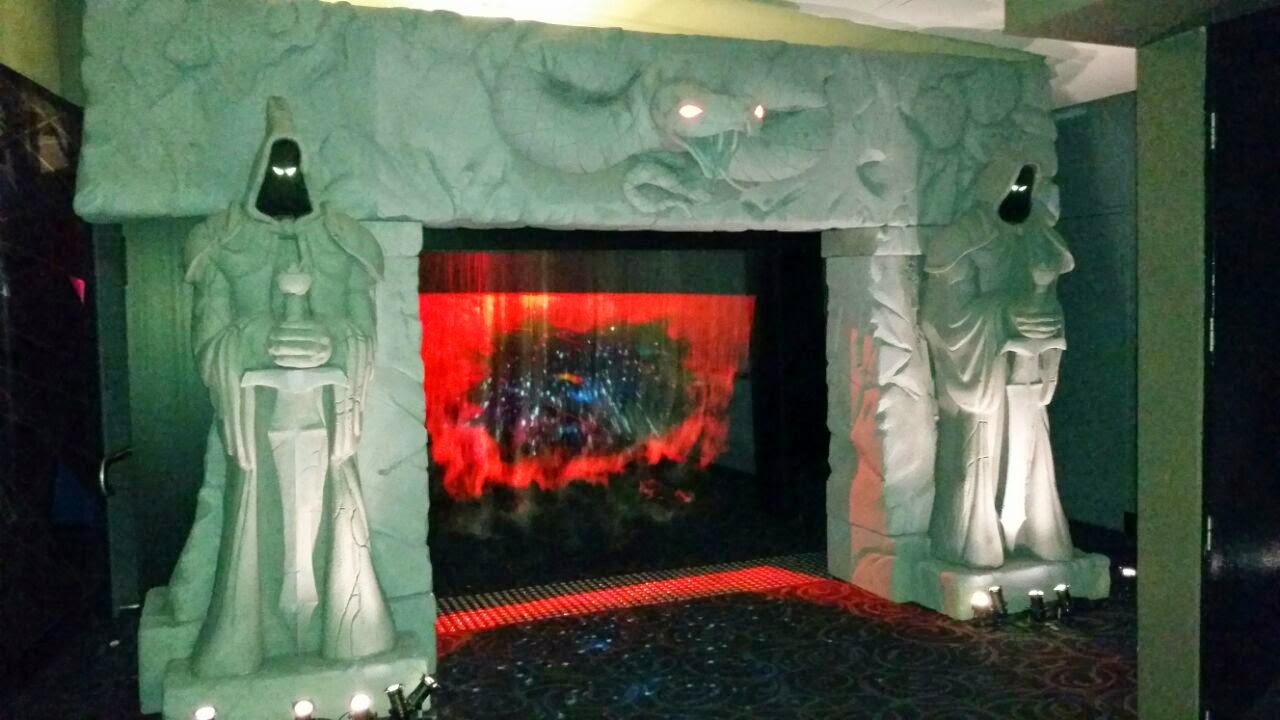 Then there was some massive artworks being displayed around.  I should have taken more photos. Got to meet @Msmiggy as well, who was responsible for getting us our tickets.  I had to make a note to take a pic with her later in the evening. 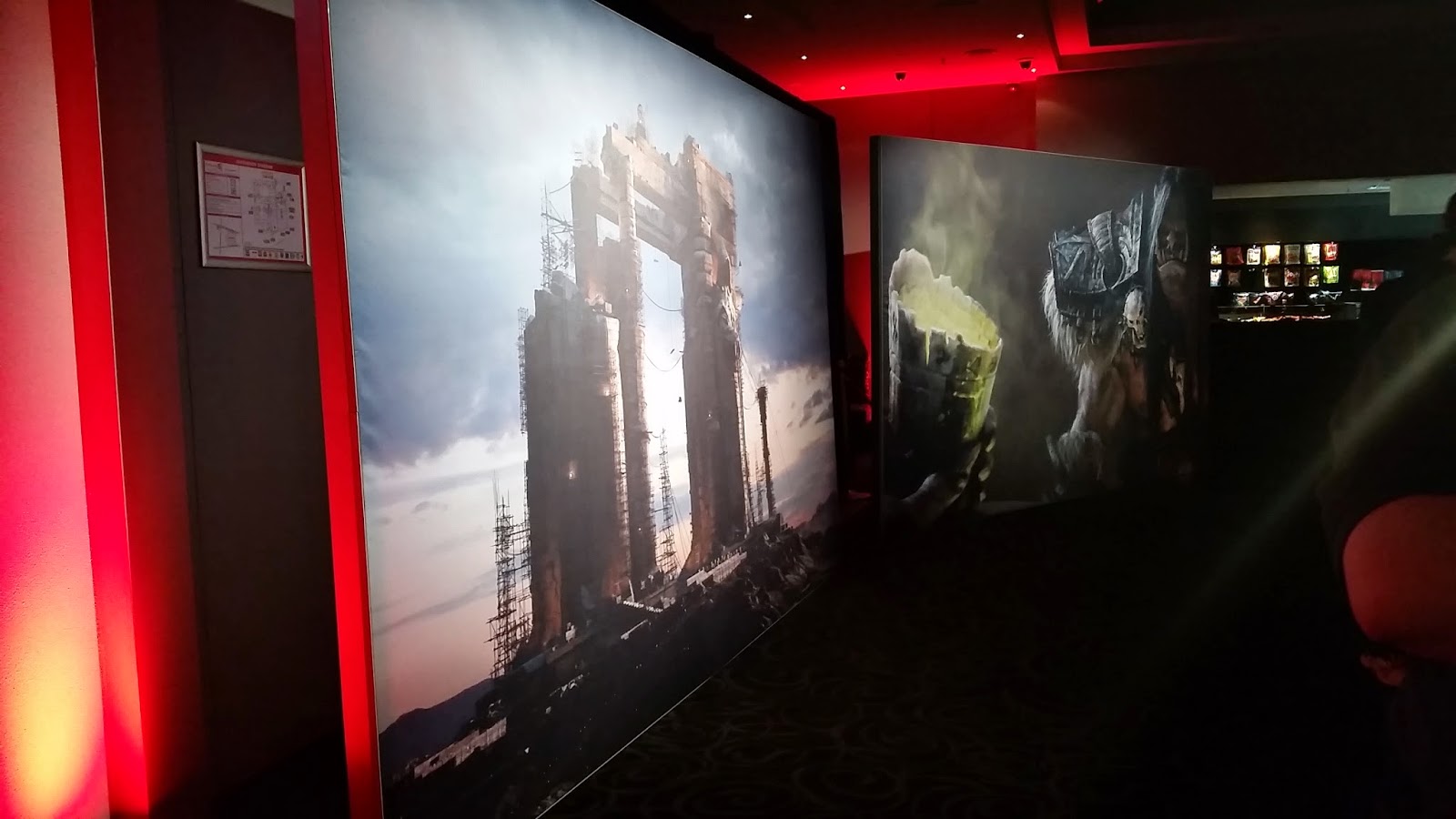 And once we went into the cinema, the walls had the Warlords looking down at us from the sides, looked pretty neat. 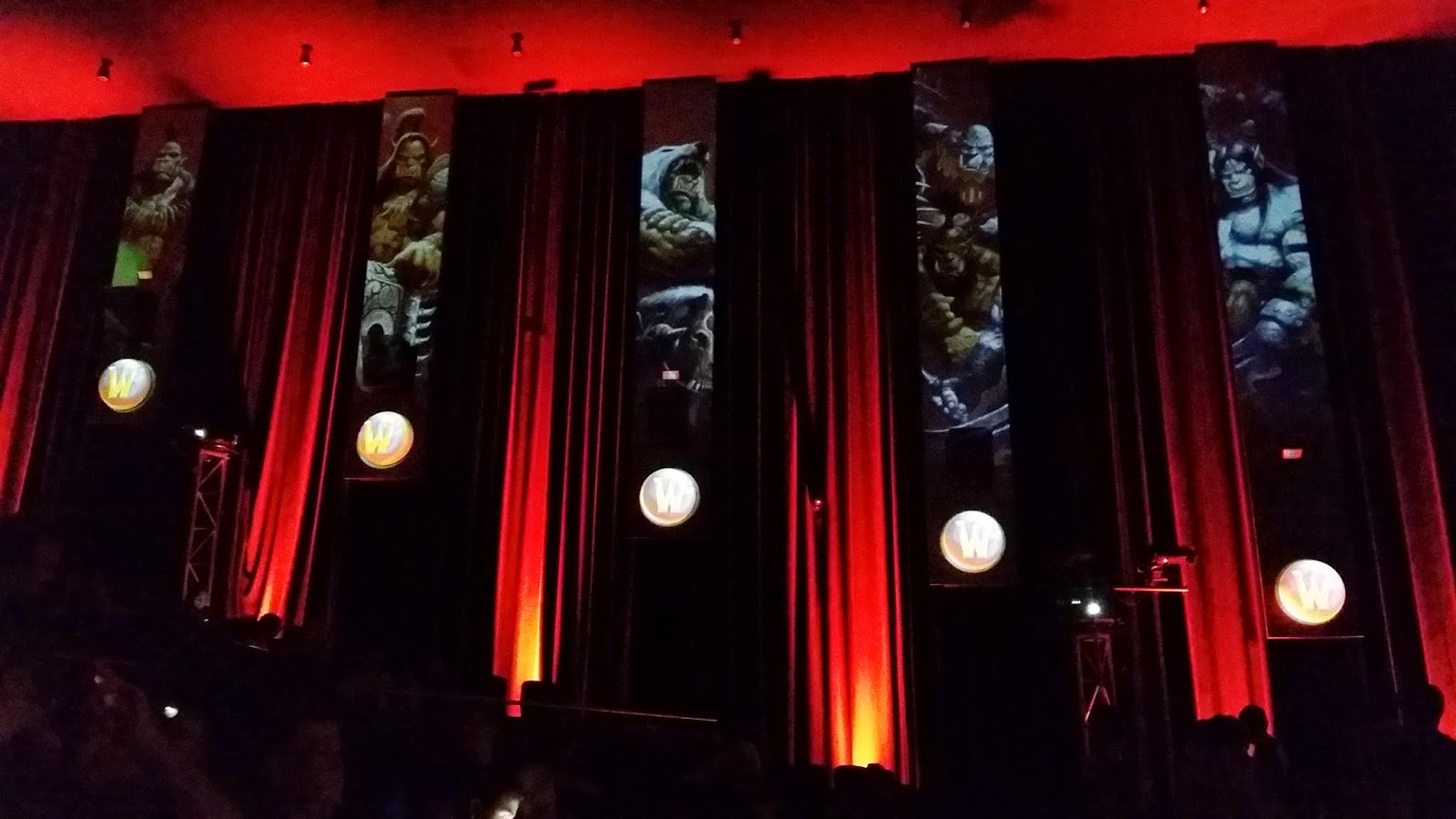 And there were surprises on the seat!  Each seat had a drink, small popcorn and a mini figurine!  I got a Murky, but there was also Murkimus and Fishy toys as well!  Lucky I didn't buy popcorn outside.

So we watched the cinematic of the original World of Warcraft on the BIG screen and we then got to meet Ion Hazzikostas himself. 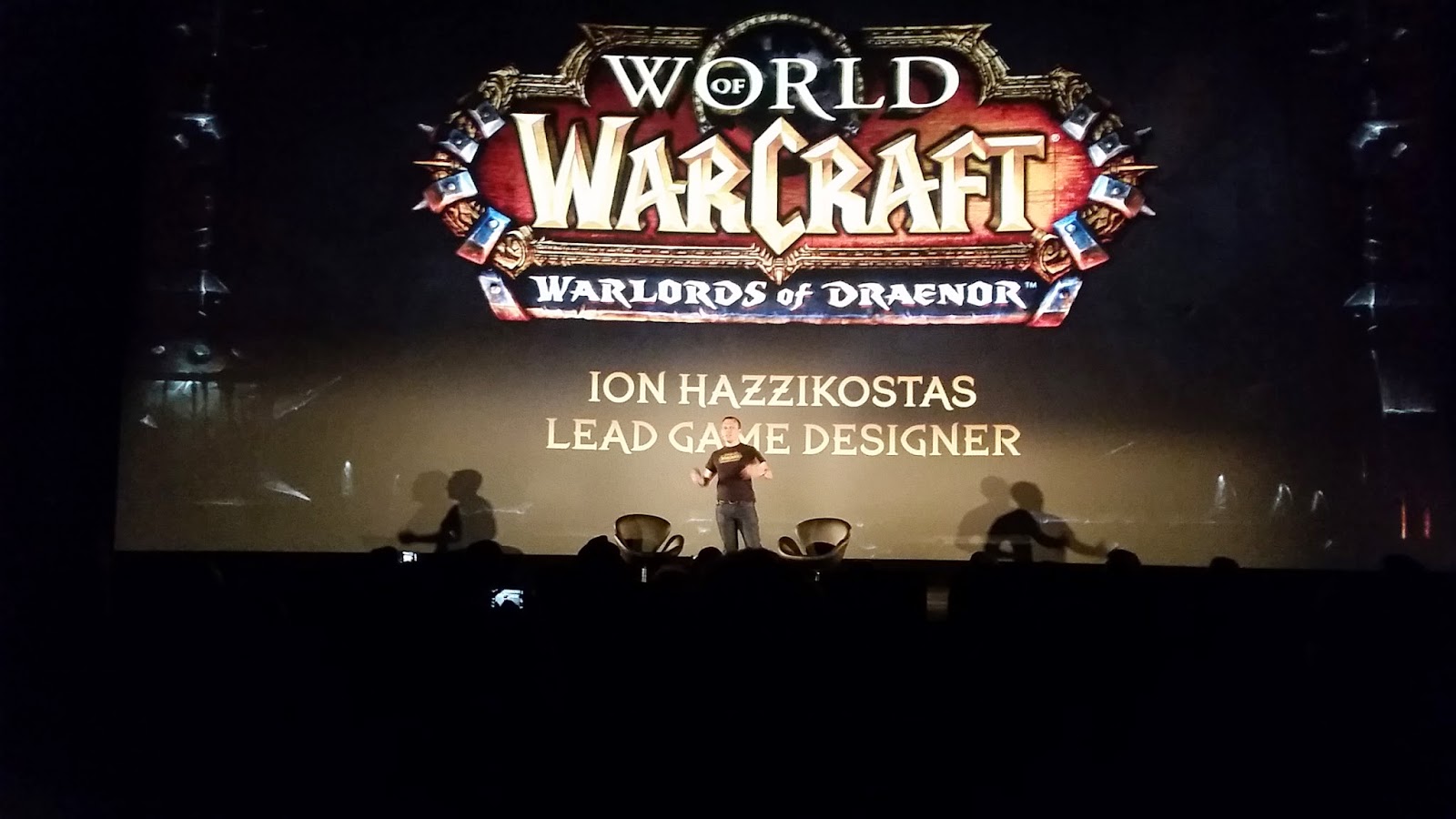 And he talked a lot about the game, and the 10 years of the game.  About the mistakes they had made and what they learned, and why they changed things the way they did.  It was a good explanation - they said that the game had stopped being fun because it was too hard to pick up, with so many abilities that it was super hard to learn to play it well.  And I'm thinking that maybe that chased away a lot of casual players from the game - because it was too hard to learn how to play a character.  It was a good explanation.  Ion also talked about how they were trying to configure things to please a certain group of players but at the expense of a different group of players.  And the solution to raiding was their current model - which I think has made the game so brilliant. People were being shut out of content because they could not access it, but now with LFR and also Flexible sized raids and difficulties, the raids cater to all player types and player skills.

Another thing he talked about was removing of some of the secondary stats, namely hit and expertise. The game was not fun if you didn't reach those caps, and then also became less fun when you went over the caps. The caps were not intuitive - you had to go look it up elsewhere to find what you needed. He said it was more fun to get more of a stat and see the benefit, like haste, where you get more haste and you cast your spells faster.  THAT was fun.

It was a good interview.  And then @Blizzard_ANZ got deep and personal with Ion and there was so much stuff about him which I didn't know.  That he was a lawyer and he gave up law to do Game Design.  And what did his parents think of that?

"They thought I was completely insane."

And that his favourite raid encounter is Lei Shen.

Then there was THE BIG ANNOUNCEMENT. 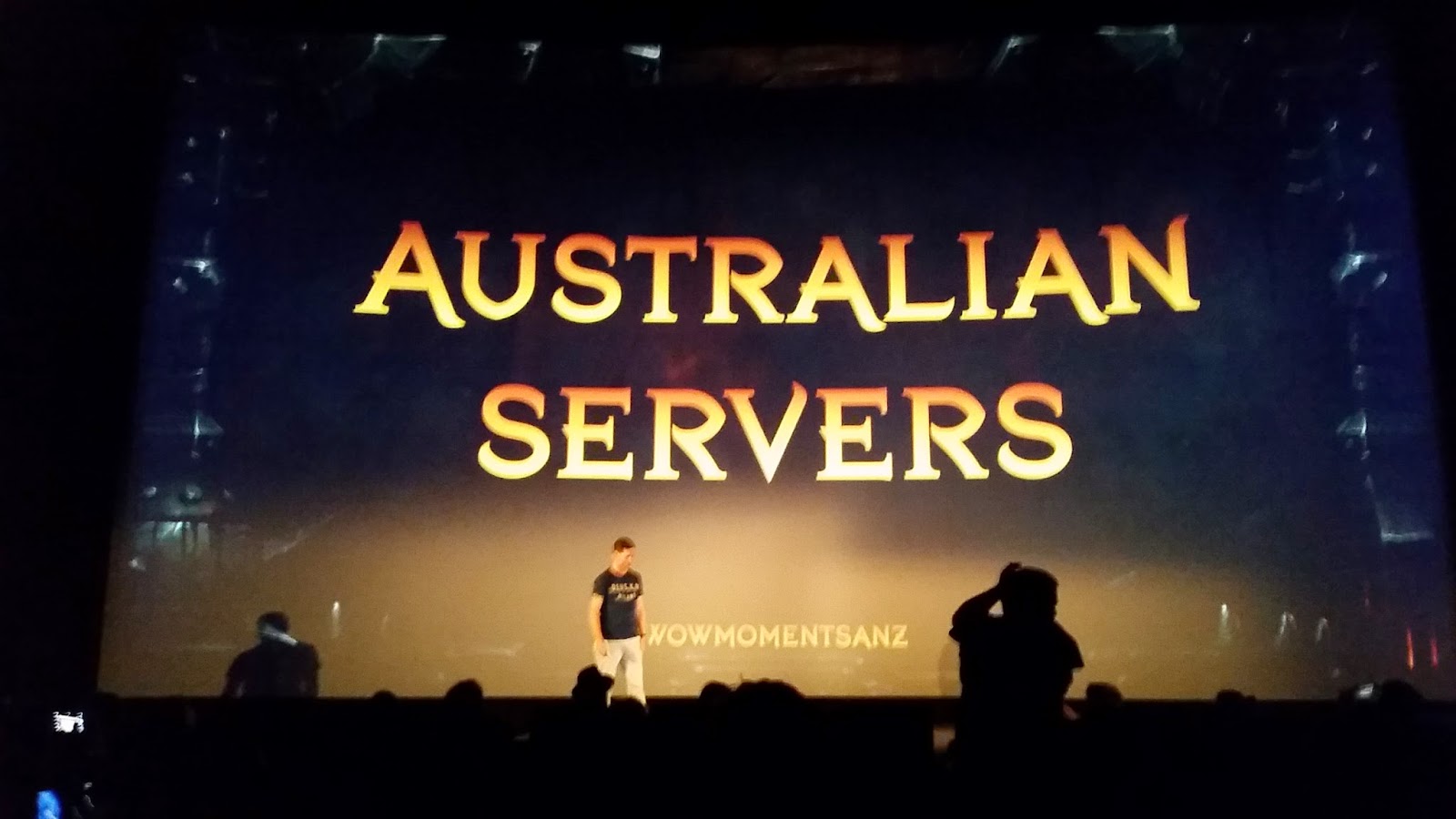 You heard it.  Next week we have super extended maintenance and maybe after that... our new Australian servers will be LIVE.

Q: When will local game servers be available?
A: We’re aiming to have the new local World of Warcraft game servers available ahead of the release of the upcoming expansion, Warlords of Draenor, which will go on sale in Australia and New Zealand on November 13, 2014. An extended maintenance to the current Oceanic realms will be required in order to migrate player data to the new hardware. Servers will be taken offline on Tuesday October 28 with normal scheduled maintenance and we will have the new game servers online as soon as possible.

There was much screaming and cheering at this announcement :D  You can read all the FAQs here!

We found Exray, Lushen and Consti after a while and took pics with them.  Then some of us who were lucky enough to have VIP passes got to go in the Gold Class Lounge and hang around!

There was food, drink, alcohol... you know I was really impressed.  For a free event, they sure made everyone feel like it was worth their while!  I met Dayani, and Toro and photobombed @msMiggi and @Blizzard_ANZ and even Ion himself!  I shook his hand and asked Ion if he wanted to come to Australia or did he pick the short straw and got sent here (convict style!).  He said that he chose to come, which is pretty cool :D

I was exhausted by the end of the evening so I said goodbye to everyone, and straight home to my computer to get all this out of my head before I crash!

So - all in all it was a great night.  Great to see such a huge population of WoW players right here in Sydney!