I've had some buggy PvP achievements lately.  Probably putting them on my blog is going to make them be taken away but I don't really like getting things that I don't feel I deserve.

We did an EotS the other day and we were winning, it was going reasonably well.  However, when we won the game, this popped up. 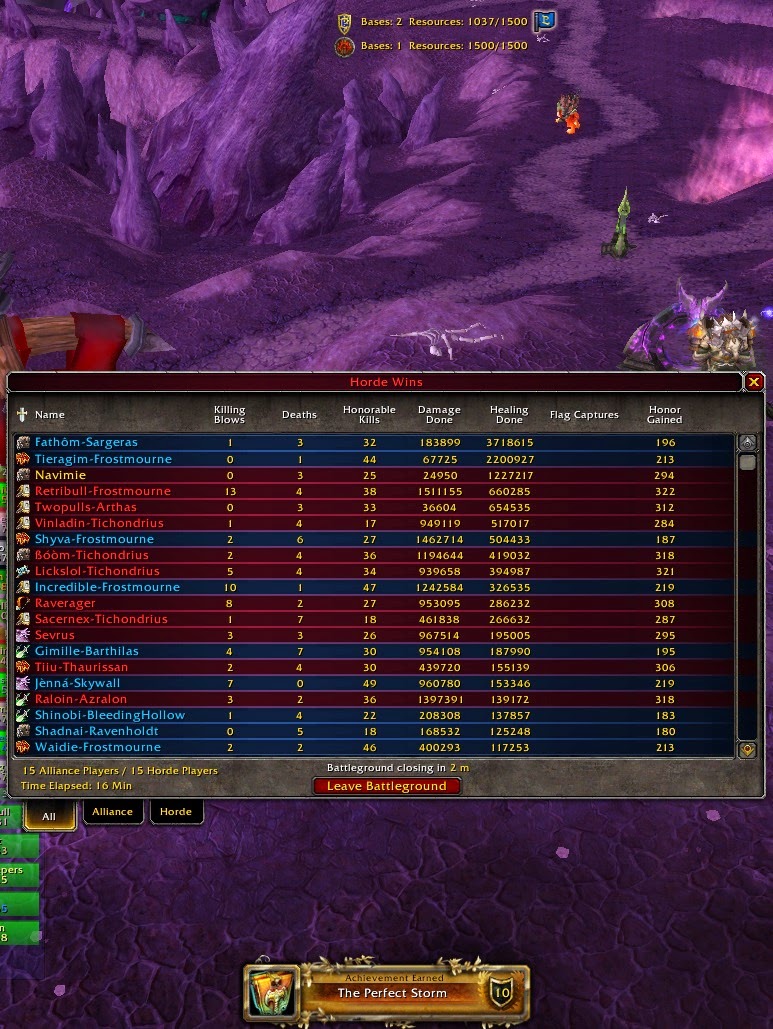 The Perfect Storm achievement is for a 0-1500 win.  You can see there that we clearly did not have that.  Strange.

Last night there were server restarts happening as we queued for a BG, and whilst we were in prep we had a few people suddenly leave the BG instance, and it was happening on Alliance side too.  At the time we were 11 or 12 vs 3, and the game said it would close in 5 mins.  So I was running to LM with Raverager and since there were so many there, I thought I'd go for stables since maybe we could get a Perfection if we 5 capped before they capped stables.  I managed to get there and cap it, got killed by a shadow priest and then rezzed and ran back as fast as I could.  By this time the whole team had cottoned on to the quest for Perfection and most of the horde players were up at the alliance starting graveyard, farming them.  I went down to mines to guard it just in case, but there was no need to fear - we 5 capped and then won and then I got my Arathi Basin perfection. 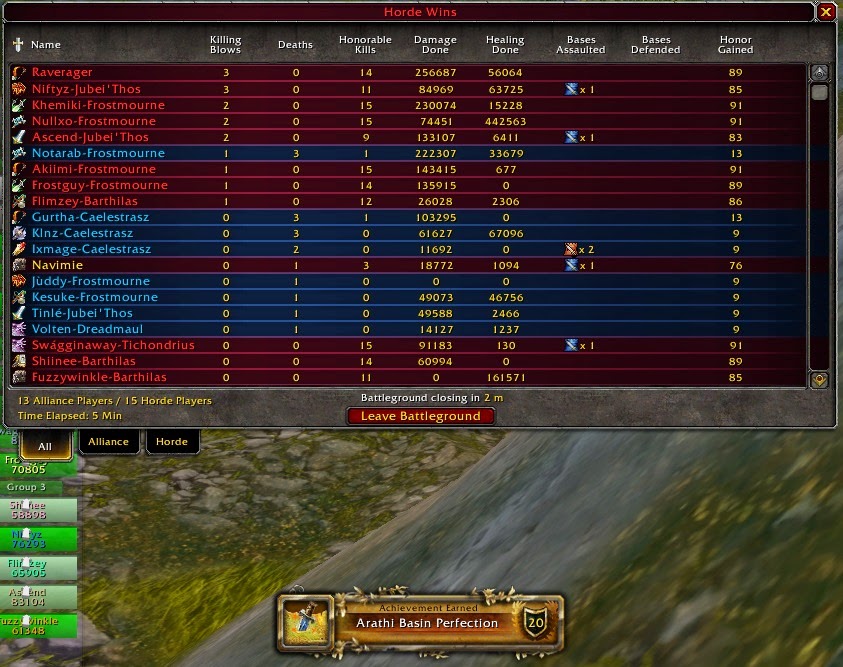 I had felt bad for cheating a bit but Luxy, who is the most fair person in the world, said it was totally legitimate.  Even by the end, you can see there were 13 Alliance players so it probably wasn't that bad.

HK/Aimei decided that he wanted to get Moorc his legendary cloak and so we were up to the BG part of it. It was abyssmal.  Not because Moorc didn't have any gear (though that didn't help) but I really felt like I was made of butter.  Rogues were killing me, warriors were 2 shotting me, and I was in full PvP gear.  Without my instant cyclones and no nature's grasp, my escape tactics were no longer as good as they were and I had to rely on Displacer beasts, Vortexes and Roars to get me out of things, and still I died. It was a bit disheartening but we finally managed to get a Temple of Kotmogu win for him when we were testing out our new latencies and at least he was happy.  That was actually a decent game if not for the Tichondrius warrior yelling at everyone - this time he was actually decent compared to the usual individuals who yell (a typical one in a previous failed game was yelling abuse at everyone but had done the least damage in the whole BG).  I dumped my spirit trinket and used the crit one as mana in BGs is the same as it is in PvE - neverending.

I even tried tanking one but that went poorly as I was tank with no healers and I died as if I was a healer anyway.  Bleh.  I didn't realise that it would force me into the spec  if I chose the wrong one (having not queued as tank before, why I did that time I have no idea - probably something to do with the Headless Horseman instance) and I think I never want to tank a BG EVER AGAIN.

I hope that there will be more PvPers around for Shab when he gets back.  With Rav and Lick around maybe there will be.
Email Post
Labels: Achievements PVP