OMG is that Ping real???

Servers were up earlier than I thought they were going to be, and I hurried to log on and check it out. I had logged out in Uldum - I was fishing - and when I logged in I had a 5ms latency, which I thought was CRAZY!  I thought maybe it was unnaturally low because when you login sometimes it's low before it starts to climb.  But I hearthed to the shrine to wait it out, and it became lower... 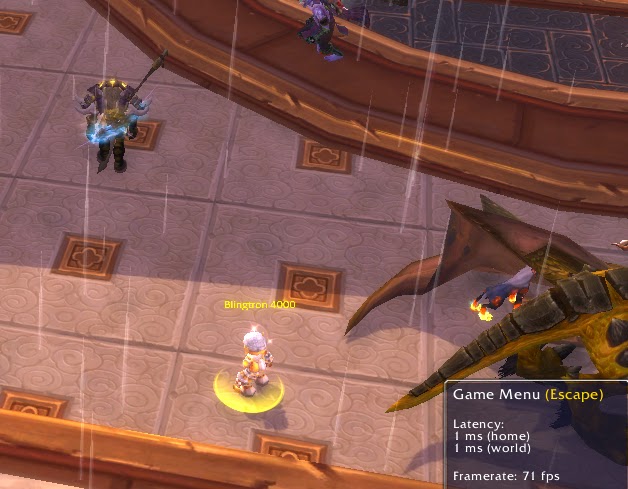 The beauty of being in the Shrine is that I could see trade chat.  It was FULL of people going gaga over their new ping.  It was amazing, it was brilliant!  It was so thrilling to see everyone happy to see how responsive their game was now, how GCD actually means something!  And I couldn't wait to see how it would perform in raids.

Guildies were excitedly comparing their latency and I admit I had the lowest - I'm not sure whether it was because I have NBN because I am not near where the servers are, though I am in the same city. I wondered to myself if the Blizzard engineers were hanging around in trade chat on oceanic servers to see the excitement that everyone had, because even just being a player and seeing everyone's reactions brought a smile to my face.

Tried a BG beforehand and world ping went up to 192 but that was to be expected when playing with americans.  LFR and LFG would probably be the same!

9pm couldn't roll around fast enough and we went to raid.  Oh my gosh, who would think you could notice a difference between 200ms and 1ms??  But you can!

We restarted the raid, not extend, because a fair few people still needed gear.  I dreaded Iron Juggernaut and Malkorok, but would you believe we did not wipe to either of those, though some of the fights were MESSY AS.  Iron Juggernaut's king would have been Crooked as he was the LAST PLAYER STANDING when we all died due to a really sloppy siege mode - I am wondering how we need to improve on that because what we do on 10 man doesn't seem to work well in 20. It was haarrowing as we watched it at 50k and it was just Exray and Crooked then Exray died... I was like... no don't let us wipe on 15k.... and then it was dead! Luxy and Crooked pointed out that perhaps it would have been better if Crooked healed, but considering the outcome, perhaps not. We will never know!

Nazgrim was... stupidly easy as well.  I boggled at Alca being 2nd on damage for that boss!  Didn't even get to defensive stance!  Then we were on Malkorok and that turned out rather ugly but we managed to do it, There were hardly any shields up, it felt and people's health was dangerously low CONSTANTLY.  Even with healers in all 4 quadrants, I think I need to fix it up into groups perhaps to improve healing because it really was awful.

There was a LOT of loot taken - I don't know why Duck took every weapon, probably because nobody wanted it, but his EPGP is through the FLOOR.  Una and Swag (now Udderly-something) joined us for the first time and unfortunately had not hit the 5 raid requirement to be able to loot on par with everyone else on EPGP.  But it shouldn't be long, Una will hit that by Monday if she attends on Thursday and Swag will hit it next week.  I think a lot of people got upgrades, and that can only mean good things.

I am hoping Thursday night will go well - Brahski said he would be on in Aza's place, so we shall see!
Email Post
Labels: mythic Raiding siege of orgrimmar