Lately, I've been on a quest to find people who are still enjoying the game as much as I am.  It's not been easy - so many people are unhappy about the game and their reasons are totally valid, but it's just nice to find someone who thinks the same as me about WoW.  Who isn't bored by it, who isn't complaining about lack of new content, who isn't saying to me that their class is broken.  Finding people who still love the game for what it is makes me feel like I'm not totally crazy for still liking the game.

Sisqi started following me on Twitter a while back, and if people have a blog and they follow me, I reciprocate and then start reading their blog.  She was enthusiastic about WoW, and I think I went to her blogroll and clicked on one of the links there, which turned out to be Gamrokhttps://twitter.com/Gamrok4, her husband.  Their blogs were similar, yet different.  The layout was the same, but the words were different, and I wondered, why didn't they just write together, like MrandMrsWoW?

So I mentioned it to them.  AND GUESS WHAT!  They actually did it!

And would you believe it, they wrote a story and I was in it! The "He Said, She Said" perspective reminded me of one of my favourite romantic comedies of the same name.


I digress.  Anyway, how could I NOT visit them after that display of awesomeness!  They were online at the time of those tweets and they wondered... aren't I on a US server?  How would I visit them on EU? LOL, with magic!  So off I went to find them.

I headed to Razor Hill, and it had been a while since I'd been there so I took a picture of my new Warchief and my High Chieftain. 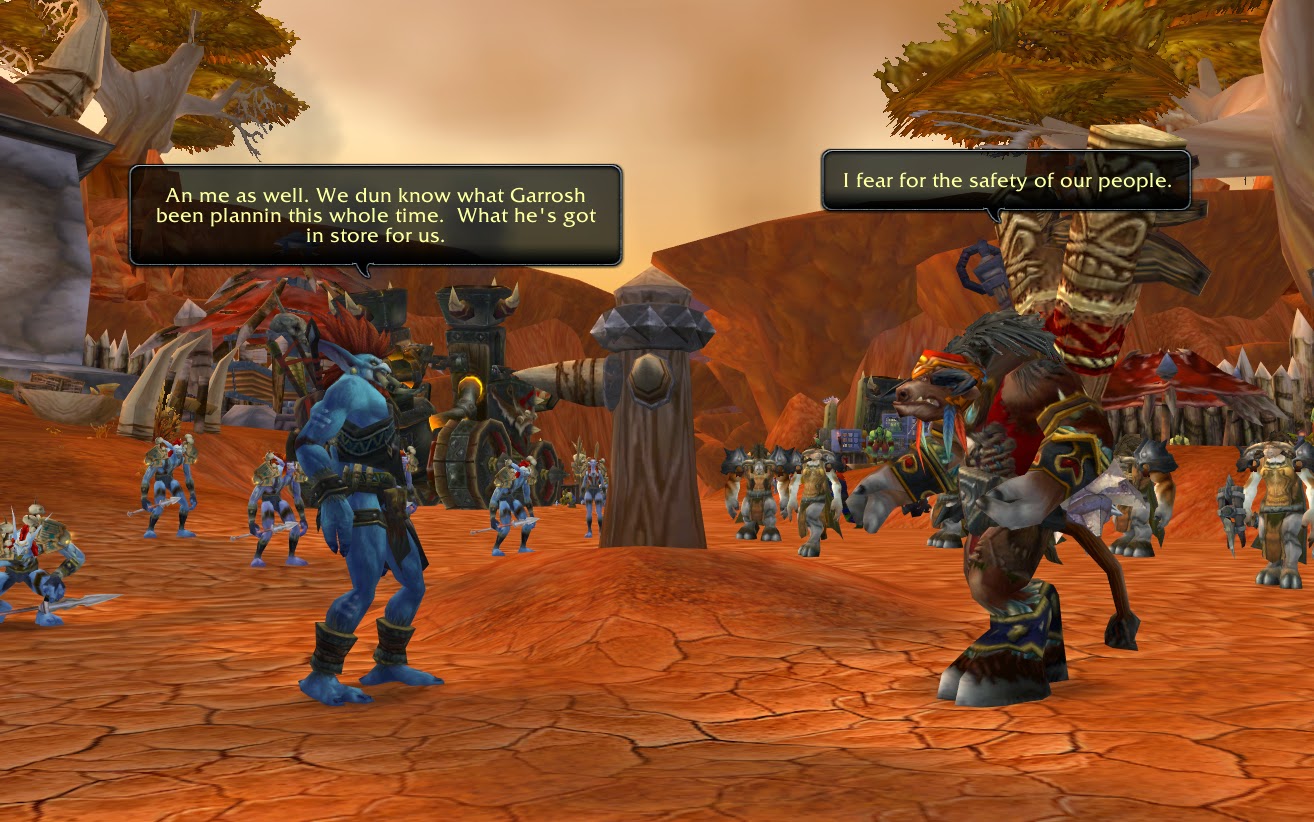 Gamrok and Sisqi were off doing individual things but they made it to Razor Hill quick smart and there might have been some drinking... 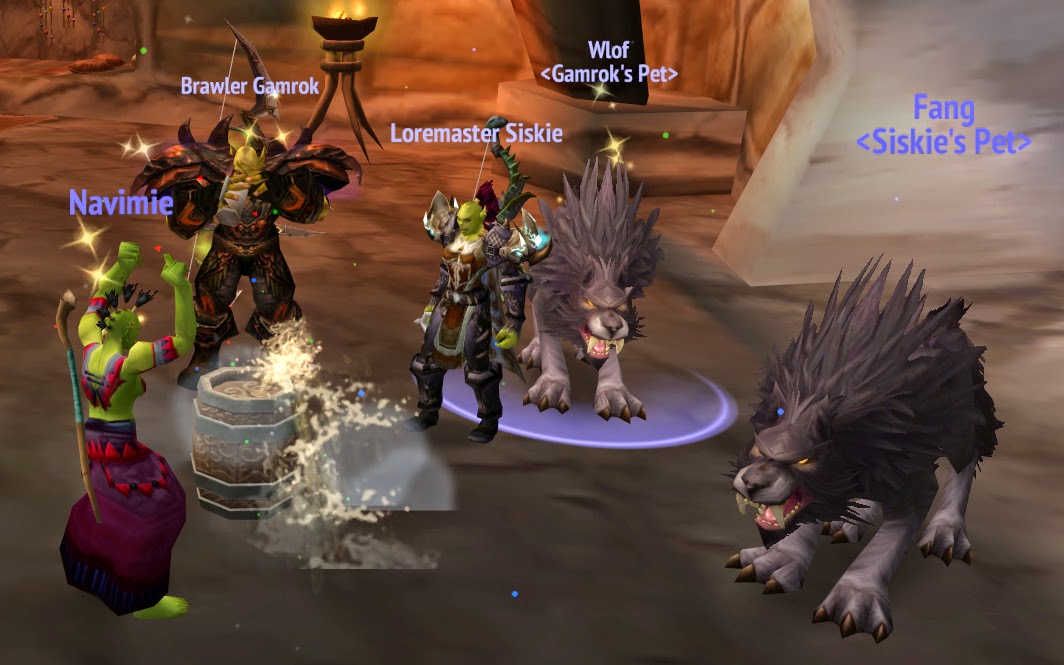 Off to find a suitable photo place.  There were weird issues with me on the rocket.  I kept falling off, lagging and phasing.  Annoying as hell.  At least I got an achievement out of it. 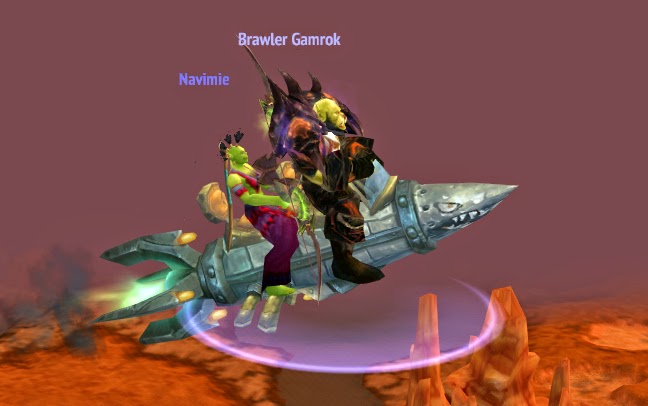 Tried the ground mount for a bit but that wasn't much better.  Back on the rocket we went, and headed off to Winterspring, Sisqi's fave place. 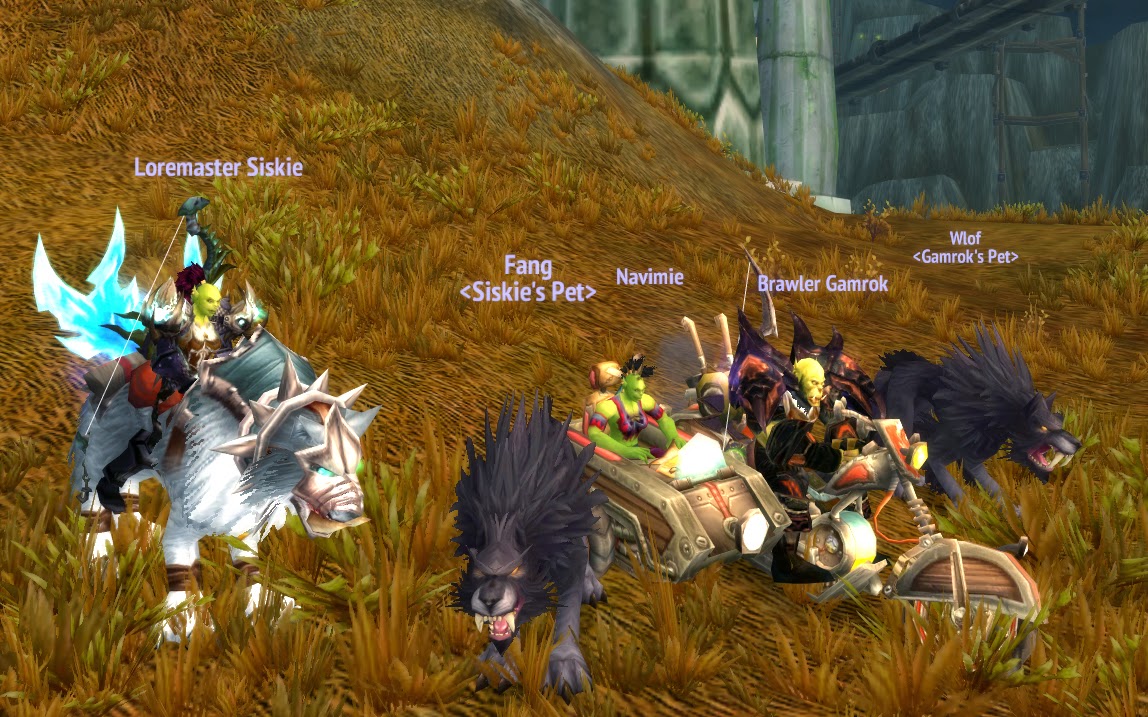 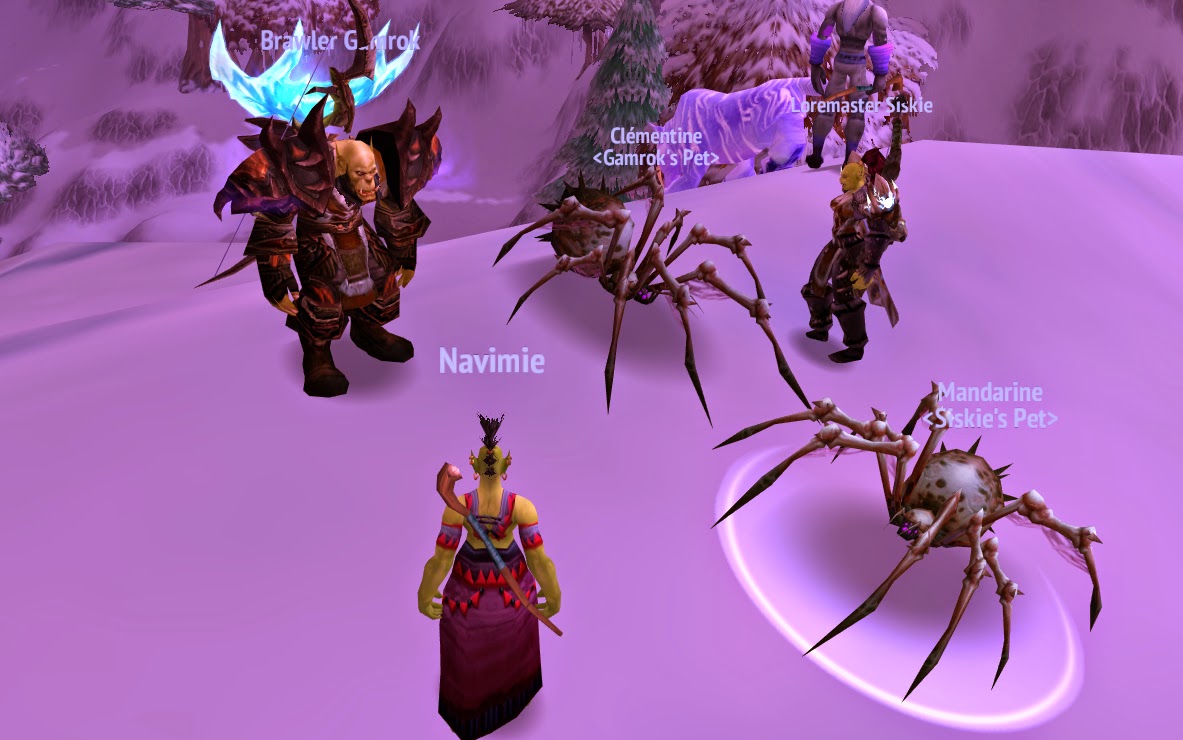 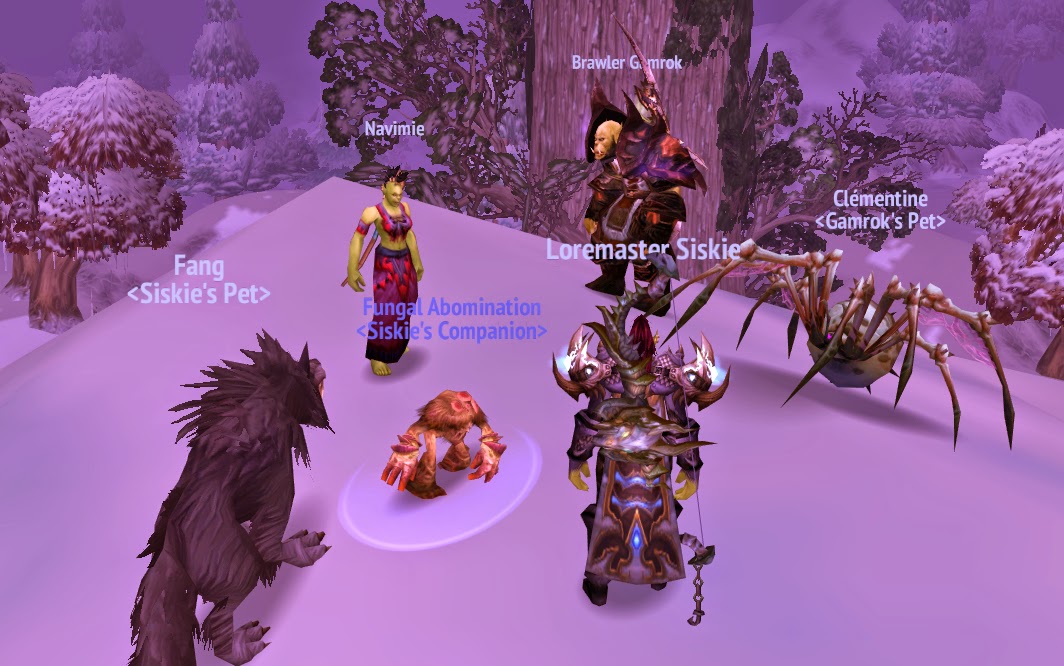 The two had just joined a new guild, and I had perused both their characters - I wondered what it was that they both enjoyed?  They said that they often played in parallel rather than doing everything together, but they would do their dungeon/raid achievements together, and they were hoping to raid in WoD.  Hopefully their new guild would accommodate that!  Gamrok wanted to flex his muscles in front of the ladies... so we humoured him. 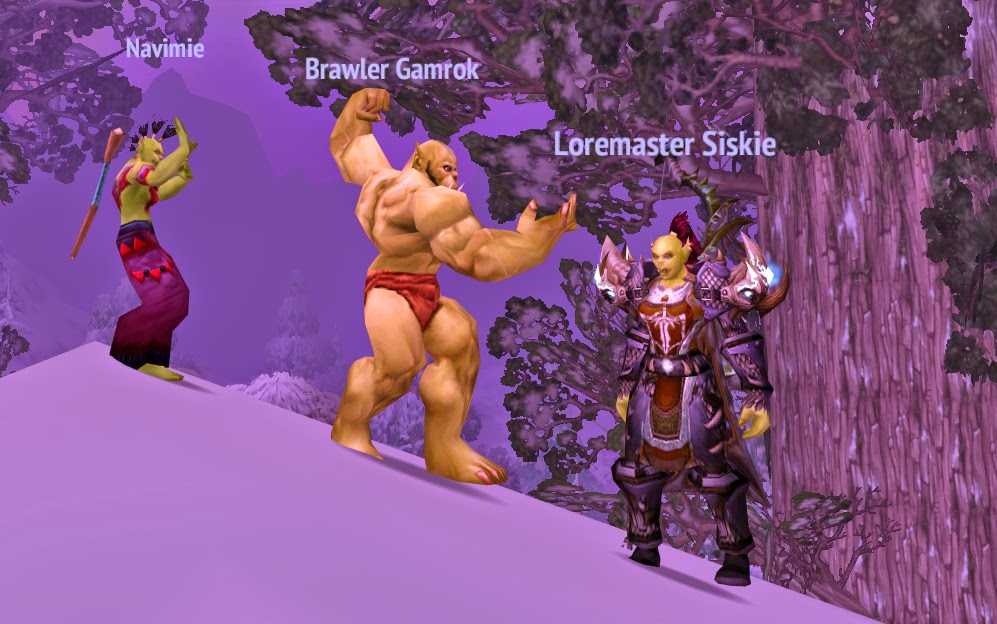 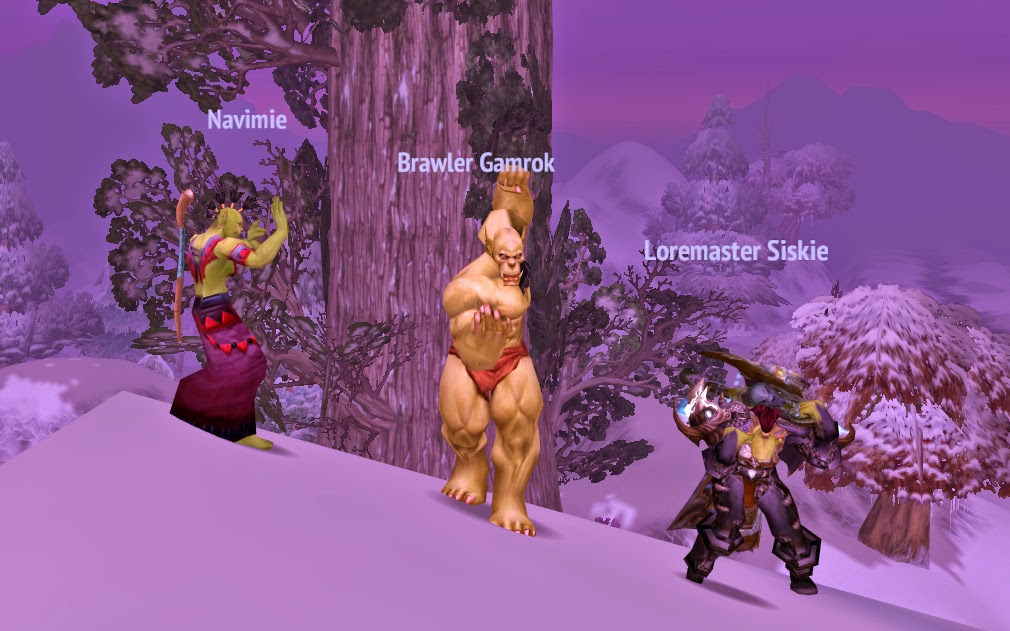 So a big thanks to Gamrok and Sisqi for having me and taking me around for some fun! I hope they have a little something to remember me by :D  And, of course, how could I not write Navimie's perspective of their hilarious story? :)

As a nature loving tauren, Navimie normally enjoyed the rain.  But she hated it when it rained in Durotar.

The orcs seemed to love these barren deserts, but there was something unnatural about them.  Even when it rained, nothing grew.  Perhaps those orc warlocks, experimenting with those magics that drained the essences of life itself to be twisted into fel magic, had left only the hardiest of life forms behind - cockroaches, beetles, scorpions, weed-like grasses - and it took a more discerning eye than Navimie's to see the beauty in those creatures.

Navimie had been pet battling with Zunta just south of Thunder Ridge, and was wandering even farther south trying to capture another rare scorpid to use for more battle challenges when the first fat drops began to fall.  She glowered at the sky and quickly shifted to flight form to try to escape the impending downpour but rain was always an all or nothing event in Durotar - within seconds her feathers were soaked and her wings began to falter and she dropped from the sky.  It wasn't far to fall, but she hadn't managed to shift into cat form fast enough and she hit the ground with an unceremonial thud.  Navimie let out an unladylike expletive when she shifted back into tauren form and glanced around in embarrassment, wondering if anyone had witnessed her ungainly fall.  She sighed as she looked at the mud on her clothing and resignedly shifted into stag form, and sprinted to Razor Hill.

The inn at Razor Hill was not known for its fine food or strong drink - it was often the haunt of younger trolls and orcs as they worked on making a name for themselves.  However, there were some seasoned looking veterans at the inn, and Navimie sat the table, and ordered a moonberry juice - even the orcs couldn't do THAT wrong.  Or, she thought, grimacing as she took a sip, maybe they could.

The innkeeper, Grosk, was happy to lighten her hefty bags.  Navimie's bags were always full and she was too busy trying to bargain a better price for all her leavings that she barely noticed the Kor'kron warrior at the next table, his voice increasing with volume the more he had to drink.

"Who dares defy the will of the Warchief!" roared the Orc.  "Malkorok himself will be here in a few days and he will purge all of you who do not follow the path of the TRUE Horde!"  The orc turned to face Navimie and she tried to avoid eye contact.

"You taurens," sneered the Orc, as he lumbered towards her.  "You lack even the hearts of  true warriors, communing with the spirits and begging their permission when they should be yours to command!"

"Hey, now," drawled a brawny orc hunter, as he rose from his chair in the corner of the room where he sat with a female orc hunter.  The female had her hand out keeping their wolves beneath the table, though Navimie could see their hackles were raised but they obediently remained silent.  "That's no way to talk to a lady."

"LADY!" spat the orc.  "That's a title fit for the MALES of her species."  The orc turned his eyes to Navimie who tensed in her seat.  "Though with these tauren, it's sometimes a little hard to tell a male from female."

Navimie went to rise in indignation, but the orc female hunter sprang to her feet and shook her head at Navimie, her movements stealthy as the male hunter drew the orc's attention to himself, and away from Navimie and his mate.

A troll warrior cautioned the orc hunter.  "Hunter, wait, he is Malkorok's...." but the hunter stepped on, the warning unheeded.

"Maybe you didn't hear me right," drawled the hunter, as he grabbed the Kor'kron's shoulder and swung him around to face him.  The Kor'kron snarled and the hunter screwed up his face and waved his hand in front of his face.  "By Hellfire your breath stinks!"

The Kor'kron orc warrior's axe appeared in his hand as he roared incomprehensibly at the hunter, who adeptly dodged the axe swing and smashed his fist into the Kor'kron's jaw with an audible crunch.  However, the hunter was not quick enough to dodge the kick from the falling orc, and he caught the full brunt of it with the left side of his face, snapping his neck back but did not even stop the hunter in his stride.

"I am Malkorok's right hand!" roared the Orc.  "Malkorok, the chief advisor to the warchief himself!  You will pay for this insult, hunter!"

"Well, Malborok or whatever your name is," said the hunter, wiping his nose as blood poured down his lip.  "My name is Gamrok and I'll show you how you should be treating the LADIES..."

Navimie watched in fascination and mild horror as the two orcs wrestled with each other.  Gamrok looked like he had the upper hand, twisting the Kor'kron's arm behind him, but was then winded with an elbow to the gut which forced him to release his hold and the Kor'kron's clasped fists smashed into the back of Gamrok's neck and he fell to the floor, stunned.  The Kor'kron hefted his axe and prepared to make a downward maiming swing.

The female orc hunter leapt into the fray and smashed a large bottle over the Kor'kron's head, and he collapsed to the floor with a strangled cry.  She then sauntered back to her table to finish her roasted boar, as if nothing had happened.  Gamrok had missed his mate's intervention, and moaned as he stumbled ot his feet, catching his breath.  He eyed the unconscious Kor'kron and roared with laughter.  "I told you not to trifle with me, Kor'kron.  Siskie babe, don't you get up, you finish your food, I'll clean up this mess." Navimie gaped at Gamrok as he winked at her and then she glanced over to Siskie, who winked slyly at her as she continued eating.  Navimie wasn't quite sure what to say.  Gamrok has dragging the Kor'kron out of the inn, depositing him next to a water trough.  Navimie got up and followed him outside.  The other customers had already vacated the inn when the fighting began.

"Navimie," she said, inclining her head graciously by way of introduction.  By the earthmother, Gamrok was drunk as a skunk. He probably hadn't even felt half his injuries. Lucky this inn was BYO - you couldn't get drunk on any of the drink they sold here.

"Navy me?" he said, loudly, "You want me to Navy you? Baby, I don't speak much Taurahe but I'm already taken, by that there fine woman," and he gestured vaguely in the direction where Siskie sat.  Navimie smiled and surreptiously wove a rejuvenation over Gamrok, and the bleeding from his nose stopped and his jaw looked  a little less swollen.  She walked over to Siskie and thanked her for the assistance.

"I'm sure you would have done the same, Navimie," said Siskie, smiling.  "I'd offer you some drink but I had to waste it on that Kor'kron filth... damn, that was a good bottle," she said, with a sigh.

The rain had stopped so Navimie decided it was time to leave, before more of Malkorok's forces came to investigate.  Gamrok threw himself noisily into the chair and looked around, searchingly.

"Siskie!  What happened to our bloody bottle of Pandaren Plum Wine?"

"I finished it, you great oaf.  You were too busy to notice."  Siskie glanced at Navimie and grinned, and Navimie grinned back, as she shifted to flight form and flew towards Orgrimmar.
Email Post
Labels: bloggers fiction meetups navispam