Nath was working so Jazz didn't want to go without him, and I didn't want to do heroic ToT without them because they were really excited about doing it!  So, I had to find something else to do on Frostwolves Friday, and I decided to try heroic MSV.

There weren't many people online at first but it filled up soon enough.  Of course, Blizz put a server restart right in the middle of raid which knocked 20 minutes out of raid time.

Kahrax and Aimei tanked, and Glow, myself and Morz healed.  Crooked, Sars, McTacky, Sev and Ravzz DPS'd and Luxy came in after the restarts.

Most of it was easily outgeared, except for Elegon which actually required SOME thinking!  We didn't realise that of course when we pulled it, and killed ourselves by getting stuck or being blown up by the add.

Will of the Emperor was tough on melee!  The poor guys just died almost instantly from the little sparks following them around and blowing up, but the tanks just bashed away and did great. 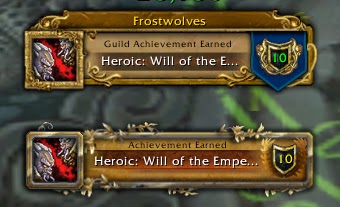 Yay another lot of achieves knocked out and guild achieve done as well!  Next week will go back and work on that ToT!
Email Post
Labels: Achievements Mogu'shan Vaults Raiding