I have been trying very hard to catch a friend online but without much luck but some other bloggers are easier than others!  One of which is Kal, of Kal's corner.

He put nice easy directions on his blog for me to find him and lucky me got it second go.  He was in a Siege of Orgrimmar raid, and I didn't expect a reply but I sent a whisper anyway, saying sorry for disturbing and I just wanted to say hi because I read his blog.  Surprisingly he replied!  And so I waited for him to wipe on finish Galakras.  When he was free he said he had never had a blog reader visit before, and I told him that the toon's name that I was whispering him from was a little misleading (it was a randomly generated name), as it wasn't my real (game) name.  And do you know what he said?

Wow. I'm so predictable.  I told him that I didn't know I was that predictable!  He said that I was known for doing this sort of stuff.  Well, yes, that's true I guess!

So we chatted a little about Galakras, and a little bit about geeks - he told me to go look up The Oatmeal's stuff on Tesla - and then told me the definition of a geek was someone who would give up sex for their passion.  Even footballers can be geeks - if they would rather play football than have sex.  Well that's different way of looking at a geek!

My burning question for him was easy - I wanted to know about his blog- Kal's corner actually has the web address thehunterchannel and he said ages ago his guildies were paying him out about always talking about hunters and so he made a blog so he could spout his hunter stuff there.  These days he's talking about all sorts of random things (not hunters) and he told me that he was thinking of an blog overhaul.  I asked him if he played other games, and he said WoW is his MMO and I got the feeling he would be playing it for some time to come.

When I asked him if he would mind taking a picture with me, he said that he was already dressed for the occasion! Here he is looking spiffy in his Overlord's transmog and Lofty Shield (making him look very Horde-y). 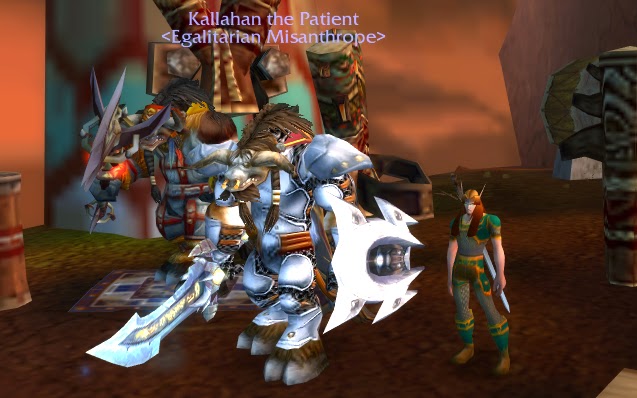 Thanks Kal for letting me visit!  I have to admit that was an easy Navispam!  Plaidelf however continues to elude me, as does Anoukisse!