I often wonder why people would read my blog.  I  mean, my guildies read it coz I talk about them.  And my blog friends read it.. well coz they're my blog friends!  We like reading each other's blogs!  Probably because we all talk about similar things - our adventures in the game and all those "little things" that make WoW fun.

But sometimes I have people who come and read and I have NO idea why they read my blog - and this is probably because it's my misplaced perception that high end raiders that they don't read blogs talking about pets, achievements and the like.  I think that might be just a bit silly of me, thinking that hardcore raiders don't have fun doing pet battles and things because there are heaps of heroic raiders out there with a TON of achievement points!

Anyway when Balkoth first commented I went to go check out his blog. And it took me a while to realise that my friend Stubborn was in his guild. 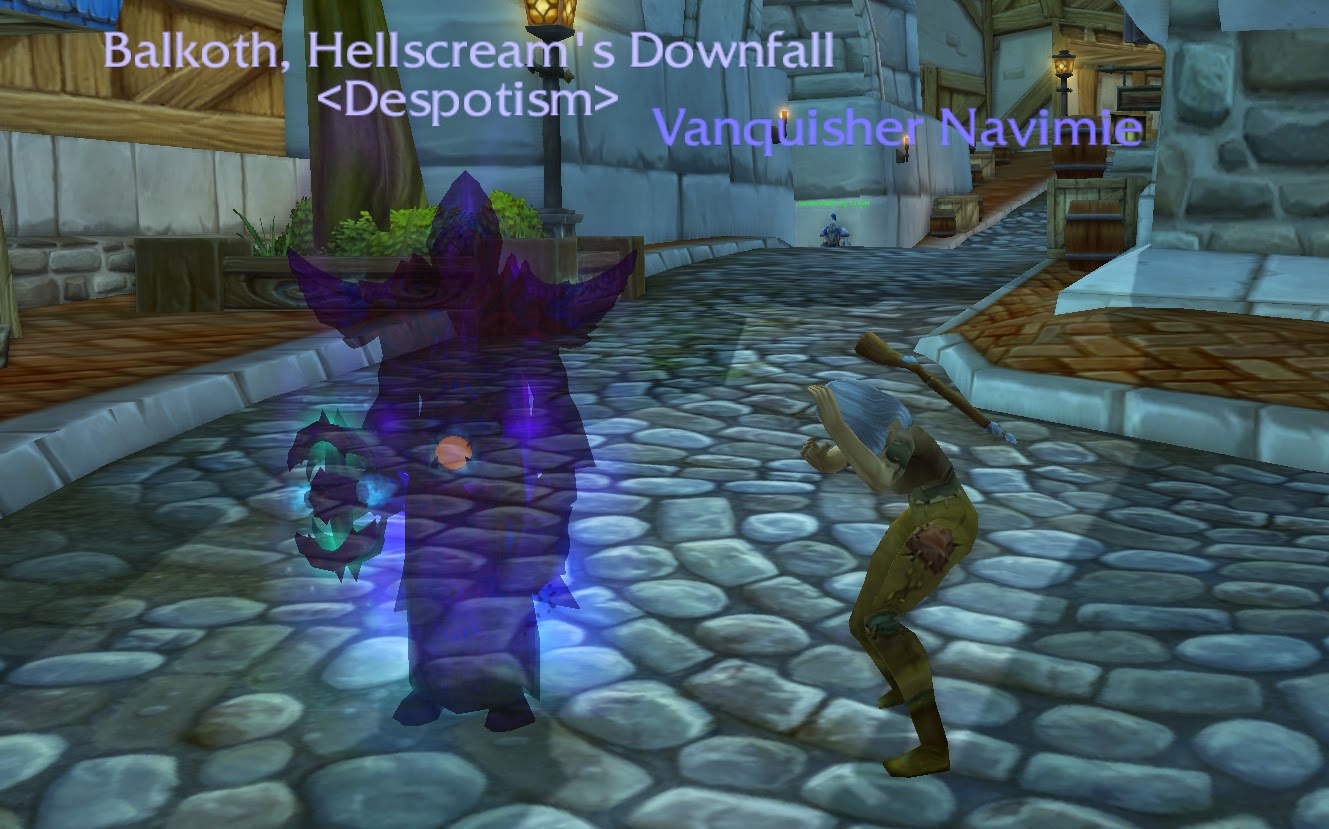 Balkoth may not be someone to everyone's taste - he's really outspoken.  I actually like that, but I can imagine that it rubs people the wrong way.  He's had some heated exchanges regarding his comments being elitist - though I think it's more misunderstanding and not wanting to open a dialogue that was the problem. But he has some redeeming qualities - Balkoth, like many of the people that I enjoy reading - answers every single comment on his blog.  And he doesn't edit comments, which means everyone is allowed to have a say.  I like that, a lot.

When I went to his server, it must have been one of those lucky things - he was online, and he was the ONLY one in the guild online at that weird hour.  And he was only too happy to have a chat.  I didn't think we'd have that much to talk about, so I was asking my burning questions - like why did he write his post about Why he started blogging, and was it so that he didn't have to make his opinion heard through other people's blogs?  And of course I had to ask a little more about the elitist jerk thing.  And what he thought of the Rob Pardo incident.

But we didn't just talk about that.  The conversation went on!  I was surprised - after all, I often don't identify well with the heroic raider which is weird because I do a little bit of it.  However, if I look at our guild carefully our heroic raiding is only at the end of an expansion, when there's tons of time on our hands. Balkoth asked me if we were going to do Mythics in expansion, but if I look at the history of raiding in our guild, heroic raiding is not something we ever seem to achieve in the early part of an expansion.  So it might be that Mythic may not affect me at all.  We chatted about guild leading (he is the GM of Despotism) and the challenges we face and acknowledged our differences in recruitment.

I guess it was nice to see that I could talk to a GM of a guild who was 14/14H in SoO and not feel like I was petrified they thought I was an absolute noob.  But really, why should they look at me like that?  Do I ever look down at people who are doing Flex raiding and struggling on bosses?  No.  So why would I think that anyone else would?  Maybe there is a small part of me within myself which is ashamed I'm not better than I am - which is just silly really.  I have every right to be proud of what I've achieved!

One thing we talked about was Curse of Knowledge.  Balkoth asked me if I understood the term.  It has been described:


...suffering from the curse of knowledge when you know things that the other person does not and you have forgotten what it’s like to not have this knowledge. This makes it harder for you to identify with the other person’s situation and explain things in a manner that is easily understandable to someone who is a novice.

In medicine, we have this problem a lot - and we often have to speak in lay terms to get patients to understand what we're talking about.  But Balkoth was referring to it in gaming.  Unlike other heroic guilds, his guild runs a flex for the social players who would like to see content.  I could relate to that - we have flex too.  He also has other alts who are unguilded on other servers who are very well progressed - I told him that it was hardly surprising, if he advertised in trade "567 ilvl Spriest 14/14H experience LFG Heroic SoO". There are bound to be heaps of people jumping on that.

And he seems to be a bit misunderstood, but he doesn't let that get to him.  Self assurance, or arrogance? An arrogant person would probably not talk to me, so I was inclined to think the former.

So my visit had a twofold result - I got to Navispam a reader, and it also made me realise that heroic raiders are really just nice ordinary people after all.