"Do you want me to tell you about how we beat Garrosh Hellscream?" I asked my daughter.

"He was our leader, but he became bad, so we had to go fight him."

"He got greedy and wanted to be stronger and stronger and even did bad things to people just so he could be a super strong leader, and that's bad."

"But you said that it was good to try harder."

"But he wasn't good... well actually he was trying hard, BUT he did bad things to get there.  You're not supposed to do bad things to become good at something.  Just like you're not supposed to cheat when you play a game just to win.  That's not fair.  You have to always play fair - you wouldn't like it if the other person cheated to win would you?"

"OK, so let me tell you this story - because beating Garrosh was REALLY REALLY hard." 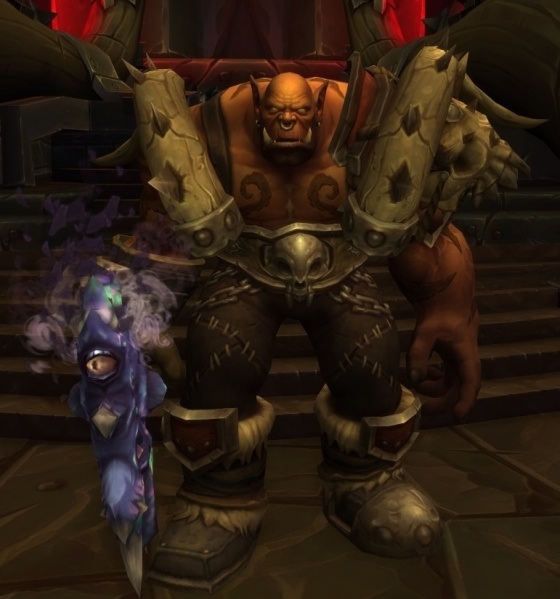 Thrall, our old leader, came with us to talk to Garrosh.  He wanted to try to talk some sense into Garrosh, because they used to be friends.  If he could talk to Garrosh and Garrosh could stop being bad, then we wouldn't have to fight him.

"But if you don't fight him, there won't be a story," said my daughter.

"If you can avoid any fight, then you should try. Fighting is only what you do when you can't do anything else. You should always try talking first."

Thrall came in and started talking to Garrosh. He told him that it wasn't too late to change and be good, just give up now.  But Garrosh thought Thrall was being a wuss.

"What's a wuss?" asked my daughter.

I screwed up my nose.  "Umm, well being a wuss means you're being a coward, it means you're scared and you're not brave."

"Why did Garrosh say that?"

Thrall got mad at Garrosh for calling him a wuss and tried to use magic to stop Garrosh, but Garrosh had so many bad shaman helping him, that Thrall couldn't use his magic to talk to the wind, fire and earth.

"No, it was like a bad version of Aunty Luxy.  Thrall is like Aunty Luxy, he uses magic, and totems, and makes lightning on people.  But Garrosh's bad shaman army made it so he was not able to use his magic, and so Thrall went to hit Garrosh with his hammer, but Garrosh has a really big sword!  He hit Thrall really really hard and Thrall got hurt really r eallybad.  So, Thrall told us to go fight Garrosh for him."

I laughed.  "Yes, Thrall is like Thor!  He makes lightning and uses a hammer!"

Garrosh was standing on his throne, and his throne room was very very big!  He had two big spiky wheels on both sides of his room, which hurt a lot when they rolled across the floor.  There was an orc called an engineer who would wind it up and then roll it onto us, so if you kill those engineers, they can't make the big wheels come out.  We usually make the hunters go and kill it and they often make funny mistakes!

"What kind of funny mistakes?"

"Well, the hunters we play with do funny things.  One time Nath was supposed to do it, and he said he would do it, but when the time came to do it, he forgot, and both wheels came out and squashed us and we died. Another time, Alariantha was supposed to do it, and he didn't kill the engineer fast enough but he didn't tell us!  He just said "Oh, you might have to dodge this wheel," and everyone was wondering what he was talking about, until both wheels came out and everyone died and mummy laughed because Ala didn't know that it was going to kill us if both wheels rolled on top of us.  Only Aunty Luxy has killed the wheel properly on the first time I saw her do it.  But we still have one wheel come out and squash us a little bit, because it not only squashes us, it squashes the baddies too, and Garrosh has lots of soldiers come help him fight and one wheel will kill them but it won't kill us - not unless you're a bit silly like Uncle Asys was one time and stood right underneath the wheel and got totally squashed and died.

Garrosh also throws his axe at us, and when it lands on the ground it makes a big puddle of magic appear that burns your feet, and if you hit the axe and break it, the puddle gets smaller and goes away.  When we first did it we used to run away from it, but now we all stand in it and Mummy and Uncle Morz just heal everyone when it hurts them.

"Why don't you run away anymore?"

"Because people who are running around can't hit Garrosh or the axe or anything, but if they stand still they can hit things.  Uncle Owl was like that, he hates moving when he plays his chicken. It's a bit lazy, but it's ok, it just means Mummy and Uncle Morz have to do extra work healing."

After a while, Garrosh's health got low and then he took us to his dreams.  He has a few different dreams and in all of them we have to kill big or little shas, and then we have to hit Garrosh.  He yells "DESTRUCTION!" a lot, and he hits people in front of him with a big purple ouchie which will kill you so when he yells "DESTRUCTION" you have to run to his back so he can't hit you.  But he turns around all the time and yells all the time, so you spend a lot of time running around.  He does that for about 1 or 2 minutes and then we go back to the real world, but when you hurt Garrosh in his dreams, it hurts him in the real world too.

When we come back to the real world, Garrosh started doing something different -  mind controls - which meant he made you do bad things to your friends.  To make him stop doing that, you have to hit your friends who got mind controlled until their health gets low and then they will go back to normal again.  When we were learning, Uncle Aza kept forgetting that he shouldn't use his big spells like chaosbolt on people because sometimes he KILLED them instead of getting their health low.

"He forgot, that's all.  He doesn't do it anymore, I think.  He hasn't killed anyone for ages."

"But why did he have to hit them so hard?"

"Uncle Aza just likes hitting things hard, and you want to hurry and get their health low otherwise they hurt you instead."

"But can't he use some softer spells?"

"He does now.  Some of the other people are annoying sometimes and use sticky spells which stick to you for a while and hurt you every second, and it still hurts them after they aren't mind controlled anymore, and that really annoys mummy because she has to waste time cleaning it off."

"Yes, just like that.  But Uncle Sev knows not to use his sticky spells on people because Mummy will yell at him."

Garrosh was still throwing his axe around, but the other new thing he did was spin around and throw whirling magic (called whirling corruption) everywhere, which hurt everyone in the room.  That wasn't so bad, because it just meant people had to stand together so they could get healed.  After he did a few mind controls and a few whirling corruptions, we went back to his dream again and everyone tried not to get hit by the DESTRUCTION purple stuff.

When we came out of his dream, Garrosh had gotten stronger.  His whirling corruptions now became EMPOWERED whirling corruptions and they hurt SO MUCH that Mummy and Uncle Morz had to use our special healing spells or else people would die! Mummy used her healing stars and Uncle Morz put bubbles everywhere.  This empowered whirling corruption also made lots of little sha came out and started following us around, and Uncle HK and Uncle KyXyn said not to kill them next to each other because if they died next to another sha, it would make that sha stronger and it would hurt more.  They also had to fight hard to live too, because Garrosh put a Despairs on them which hurt them a lot, and so they had to take turns hitting Garrosh because the Despair would kill them if they got too much on them.Everyone was supposed to take their Sha away and kill it so it somewhere by itself.  Garrosh was STILL doing his mind controls - he controlled Uncle Aza a few times and we had it hit him super fast because he was yelling "I'm CASTING!" and we had to kill him till his health was low so that he wouldn't cast anymore.

"What does casting mean?"

"If Uncle Aza is casting his spell, that means he'll make someone ELSE mind controlled which means they will be killing us instead of killing Garrosh."

Eventually Garrosh's health went down to 10% and suddenly we got a surprise! He turned big and purple and ugly and lumpy  and he got a little bit of health back.  We now had to kill him superfast - and break the people out of their mind controls because we couldn't interrupt them anymore so you had to kill them till they're almost dead to make them not have any more mind control.  Uncle Kyxyn now had to keep Garrosh attacking him all the time while Uncle HK grabbed all the sha's that he could so that everyone was free to hit Garrosh.

Aunty Luxy cast bloodlust, which made us move super quick so we could cast lots of spells and hit Garrosh more times (and make mummy and Uncle Morz heal faster) and soon yay!  Garrosh was dead and we got to get some of his big treasure!

"I didn't get it that time, but on one of the other times we killed Garrosh I got something!  Uncle Aza got a big weapon to give to his demon to use, Uncle Sev had gotten a trinket which made his spells stronger, and Uncle KyXyn got something pretty hat to wear.  Aunty Luxy even got a special weapon that she can use when the new World of warcraft comes! Oh and guess what we all got as well?"

My daughter put her finger to her chin as she pondered.  "Did you get... a sword?"

"I give up."  My daughter gives up too easily. Lazy little thing :P

"We all got new wolves to ride!"

"What colour was it?"

My daughter rubbed my hand.  "I wish you could get pink wolves to ride.  That would be really nice, don't you think?"

I smothered a smile.  "I think Uncle Sev would think that would be a WONDERFUL thing to ride!"