Navispam - When Narci is not Narci, that makes things hard!

It seems to me like a lot of long standing guilds didn't survive the end of Mists of Pandaria.  Shadow Rising, the guild of my friends Arvash, Liyhe (Slice), Lyssianna and Repgrind was another casualty, leaving my Drak'tharon toons with no home.  Not that it matters much for toons below level 15 anyway!

Arv, Lyss, Slice and Adoe found a new home on Drenden, in the guild of Rades/Fabulor in Tsu Tain Guu Faitaa.  That guild is full of bloggers and well known people (and I have navispammed Stoppableforce there before and met Rades too!).  So I thought I would go see Arv and Slice as I saw they were in Siege of Orgrimmar and say hi to them after raid. They were busy in spoils because I whispered them both but they DBM said they were midfight.

However, I did notice that it was quite late for them, and I went afk for a very short period as I waited for them to finish raiding, and when I came back they had logged!  I was sad!  Well, at least I could say hi to Stoppable at least, and Fabulor.

Stop said that was playing with his new transmog.  I asked if I could see.  Little did I know was that it was THE Dark shaman transmog which had dropped for him in raid today!  Naturally I wanted to take a pic, and Fabulor being Fabulor, just had to be in on the pic too. I can't believe I got to see my first one! I think Stop was pretty happy about it too :D 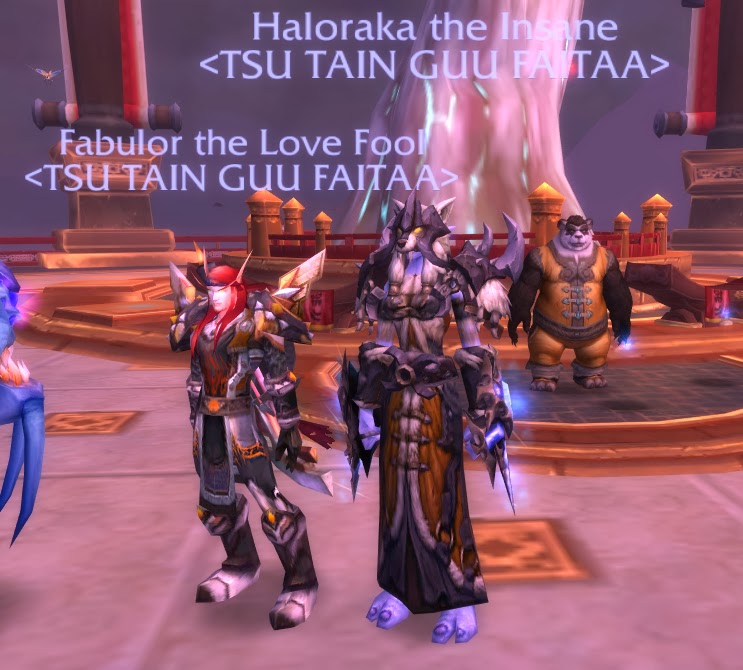 "Where's Narci?" I said.  I did not see any druids around in the guild roster, nor any name resembling Narci. Narci writes (sporadically!) at Flavour Text Lore, but I can't remember the last time she wrote anything - years go!! She is very active on Twitter though!  Aha, there she was, hiding as a warlock, Drizabeth.  Before I could even ask her for a pic, she was already at the bank finding her nicest transmog LOL!  I was so embarrassed because I was an under-dressed level 2 that I forgot somehow to include myself in any of these pics.  Narci said her druid was somewhere else, and this was one of her alts, but it was a very GEARED and nicely dressed alt :D  She went off to kill warbringers after - apparently Drenden is quite quiet and you can always tag your Warbringers.

Caffpow is also a blogger in TTGF, who writes at Thing What Wows, and there she is there in the pic as well!  Narci felt sorry for little me so she gave me a home in TTGF which was pretty awesome :D Now I will not get guild invite spam again!  And hang around with a bunch of cool peeps.

TTGF has 16-18 raiders, and they were currently cycling all their raiders through a Garrosh kill.  I remembered when they killed Garrosh - it was a few weeks before we got it.  I really liked that they were doing that - it reminded me of what I wanted to try and do as a guild, and also that Raked hadn't gotten a Garrosh kill yet. Something I should get on top of, really.  Hopefully this week or next week.  I really do like their guild policy.

The main purpose of TSU TAIN GUU FAITAA has been and always will be friendship. The original members are separated by no more than two degrees (i.e a friend of a friend) and all know each other in real life. All additional members to the original group are expected to maintain and promote the friendly atmosphere of the guild lest they be kicked (kicked meaning to be removed permanently from the guild) and never spoken to again. Secondary purposes of the guild include raiding, pvp, questing, and creating sitcoms using the World of Warcraft sprites as a means of free animation.

It's something I would like to promote for our guild, though raiding is a large part of ours, and I am still striving constantly to find that balance between friendship, cooperation and raiding goals.  Hopefully seeing more guilds like TTGF and seeing how they handle stuff will help me find my way there.