I remember when everyone was getting Hearthstone betas and saying how fun it was.  I didn't have one, and I said Hearthstone was sucky because I wasn't playing it!

Then we went to Blizzcon and they showed a few games, and it looked pretty cool.  I mean, it was an electronic version of the TCG, right?  Even the artworks were the same!  I had a few of the TCG and Arvash had given me a druid deck but even though I read the instructions I still had no idea how the game played.

Even Sars gave me a beta key and I didn't use it... and I watched lots of my btag friends playing and wondering what they saw in the game.  Everyone started getting hearthstone beta keys and I didn't get one... then HK pointed out that I actually had to ELECT to get it, and if I would just get off my lazy ass I would get one... but I couldn't be bothered, since I had no time to play other games!  Maybe when it came to iPad or Andriod!

Then this week, Hearthstone went live.  And I saw that they even had a mount achievement for it - play 3 games... omg, I didn't know how to play!  How was I going to do this achievement!

I saw my guildies getting the Hearthstoned! achievement - except Luxy. It took her a while to get hers.  She said she played an extra game. Other people said you had to exit battlenet totally and log back in.  Well, I thought ok, it's time for me to try this thing.

So I got it and started playing.  I like the graphics and the sound - it really seemed like a game built for a tablet device!  It seemed so smooth and polished and so I did the tutorial - it was easy to understand and it finally dawned on me HOW this game was played.  So you DON'T play with the whole deck!  Oh, so THAT'S what a minion does! Oh, I see, I get these numbers in the corners now!  Oh right, you ATTACK the hero!

Anyway, I found that I actually enjoyed myself a lot - much more than I thought I would!  I played through the practice for a bit and then thought I would try the play mode.  A few people just left as soon as we joined a game, so the beat another player turned out to be easier than I thought.  I got 3 wins and got the achievement in Hearthstone, and won an extra one, just in case (like Luxy said).

I went back to WoW but nothing was there.  No mail, no mount surreptiously added to my mount list, no Hearthstoned achievement.  Oh well, maybe it takes a while.  I wasn't worried.

A few hours later I still didn't have it.  I logged right out of battle net and games.  Logged back in.  Nope, still not there.

Then I went home and got on a different computer.  Nothing there yet, no indication of new mail - though admittedly I hadn't actually opened my mailbox when I logged on at home.  I was composing a ticket when I was complaining about it in guild, and wondered where it was.  Of course, I had everyone who hadn't seen me on before telling me to try another game, log right out of battle net etc... :P

After a little bit I thought maybe I should check my mailbox and I opened my mailbox to find.... 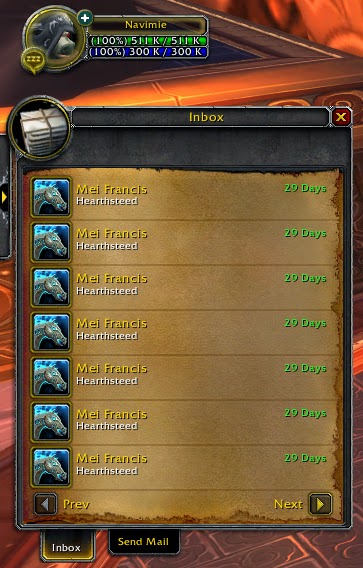 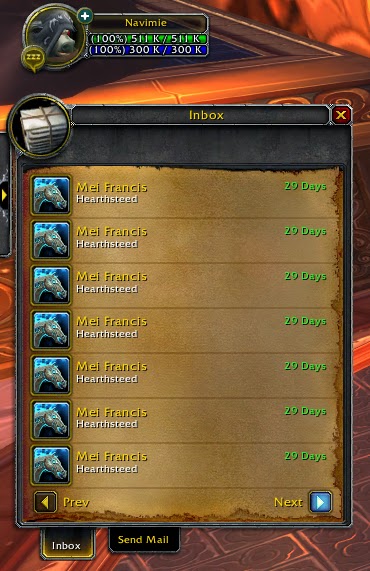 The third page in my mailbox looked like the second page, but you get the idea.  Yep, I had 21 Hearthsteeds!  Now that was kinda funny :) Yay achievement!

And of course, the mount.  It is nice looking, but I think it looks rather ridiculous on a tauren.  Especially with my PvP outfit on. I think ToT gear would look nice with it! 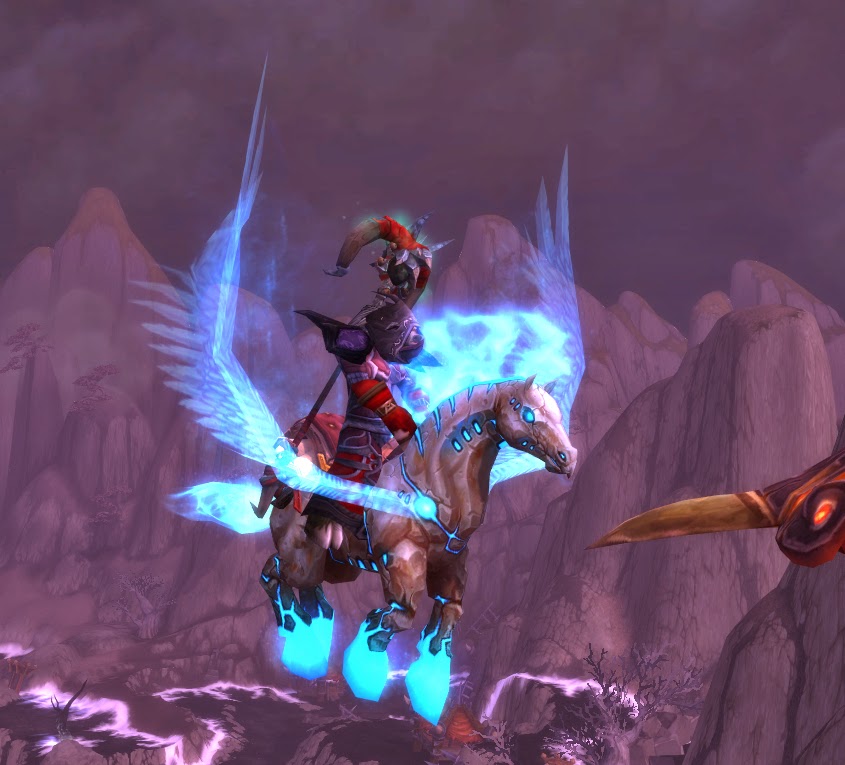 And of course, this post wouldn't be complete without a picture of us playing Hearthstone - so Tacky was only too happy to oblige! 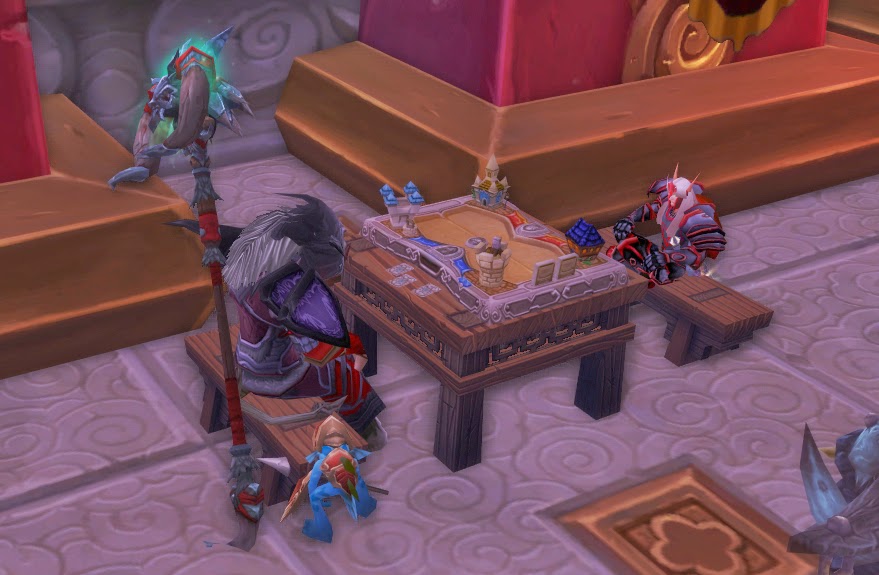 Even my Murkimus wanted to get a peek at the action! :D

But I really can't believe I'm enjoying it - I think I might be one of those people who likes playing the computer mostly and occasionally venturing into PvP land (much like me and pet battle PvP) but it's the perfect thing to play when I'm at work - especially with WoW winding down and I find myself even contemplating levelling an alt all by myself since I can't even do any gathering on my main.  I'm sure everyone has their mount already - but if you haven't give it a go!  It's free to play and it's kinda fun once you get the hang of it (even my daughter likes to watch me play!)and hey, not gonna turn my nose up at an achievement/Feat of Strength to go with it either :D