Raiding - Lucky we left one full night for Garrosh!

It actually took us ALL NIGHT to get Garrosh down.  We only made one substitute - and that was swapping Morz in for Cranked - to see how he would go.I don't think his healing was that much different to Cranked's but I think that part of the difficulty was in the last phase, and the hectic it gets.  We ended up swapping in the last half hour to have Cranked heal and we got it down 3 minutes before the end of raid after 3 attempts. It took about 8 goes all up.

We had tanks die a few times.  We had some DPS dying a few times.  Adds killed 2 people in one of the phases.  Kyxyn had eternal flame so that was helping.  DPS had some slow and fast times, so I can say that wasn't a healing issue.  However, I think the bit that is hardest for Morz is Phase 3, where everyone is running their ass off everywhere and getting MC'd and interrupting.

I'm feeling rather useless in Phase 3.  I can't interrupt these casters anymore unless I get Glyph of Fae silence (which means I have to be in bear form) and that's gonna be hard since I'll be healing like crazy during that phase.  A shame that knockbacks don't work, or fears. But, maybe I'll try that Fae Silence, since other resto's are trying it.

I didn't think healing was that bad, so I just pulled up a graph of the healing over the 8-9 attempts.  I think overall healing is the same, but obviously distribution is different when I have Cranked healing as he does snipe some of my heals.

Loot was... ok.  Cranked got the BoA staff, and Sev got his Black Blood of Y'shaarj, and another Vanquisher token dropped so I took that for offspec.  A warforged Xal'atoh dropped which we gave to Aza's felguard... I even have a picture of it... 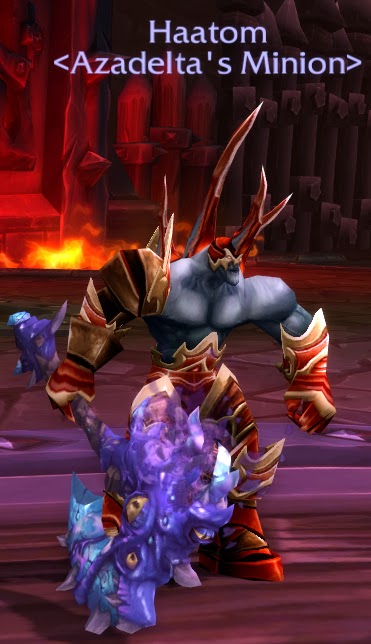 It's probably the last time we do Garrosh for a while, as there isn't much loot from him that would be of much use to us since we're doing heroics.

That said, we will probably aim to do Garrosh EVERY week at least so people can get some BoAs. If Concur is amenable to us joining up with them on Saturdays for flex 4, then we will do Garrosh on Saturday nights, saving our easy runs on Sunday for 1+2+3 or a combination of either.  I was laughing to myself, thinking that it was highly unlikely that I would care about a BoA but I have kept rolling for it because everyone keeps talking about it!  I think I will stop doing that, and you know what - when I stop caring about it, it will drop.
Email Post
Labels: Raiding siege of orgrimmar