Raiding - And Blackfuse makes FOUR for this week!

I gave away the punchline... last night we got Siegemaster Blackfuse down and we were thrilled to pieces. Asys and I were talking to each other with the usual concerns that it was going to be a nightmare to heal as I listened to what Kyxyn the Tyrant was telling us about the fight.  Sabre had never been to Blackfuse on Flex so he didn't know how we did it on Flex - to be honest, I didn't quite understand the full mechanics of the fight either except that sawblades come for ranged and the drills from the ground are bad and I need to stand next to the red line so I can jump across so I don't get hit by them.  Oh, and run from the laser.

Internet was being bad yesterday.  Lush/Aimei was having dreadful connection issues.  Owl and Lushen were also lagging because of being shaped or being capped.  Aimei ended up having to drop and we dragged Voros away from Hearthstone to come raid.  Luxy had logged on but she had a headache and so I let her sit out for a bit but she was available if needed.

Aza said to Sabre "Hit the boss, don't stand in bad."  He added later, "And don't drop fire where I'm getting on and off the conveyer belt."  Sabre and I must have missed that bit.  Sabre had fun killing Aza by dumping fire on his conveyer belt area much to Aza's chagrin.  But I wasn't worried about that - I was busy trying to figure out how to reach all these clowns who were running all over the place.

Blackfuse himself seems to be rather squishy.  His health goes down really fast, and it's mostly about survival and avoiding things for the rest of us.  The conveyer belt DPS kill things and that controlled what machinery was attacking us.

Having a few shredders up seemed to spell doom for me.  And the death from above is certainly ouch!

Asys was grumbling at me.  He said that this is why he didn't want to be a healer - it's like a thankless task. I agreed - but perhaps we were making it look too easy.  "If only we weren't having all these connection issues, we've got this," and "We're doing really great we so have this!" made me feel like I was the party pooper in the whole raid - well, maybe Asys/Cranked was right there party pooping it with me.  We weren't going to give up, but I was determined to try harder.

How excited was everyone?! A fourth new boss in a raid week!  Flying along!  Second wing really was a roadblock compared to this third and 4th wing!  Of course, we still had Paragons to go and then onto Garrosh, but it's been an amazing achievement this week!  Tier shoulders went to Sabre, and offspec mail went to Cranked.

In the excitement, everyone ran off and forgot to take a picture! 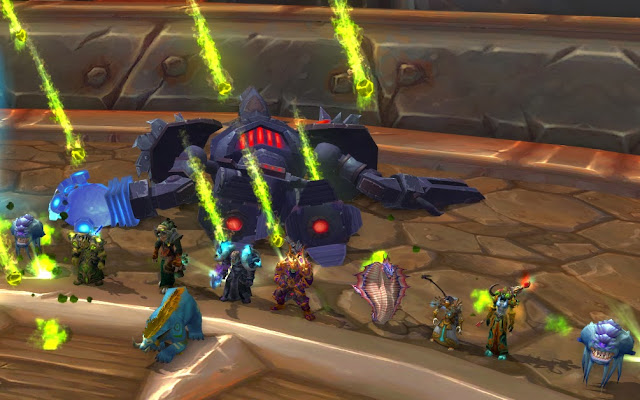 I managed to grab this one before it despawned.  Kyxyn and Owl weren't there because they'd run off and didn't get back in time.  Great work Frostwolves, just two more to go!