I was perusing my achievements and I noticed some of the new PvP ones that had been added - and Grievous Combatant was one of them.  I hadn't really looked at them, and when I opened it I realised that I was actually quite close to completing the achievement.  I opened Shab's armo(u)ry and saw that Shab was even closer to it than me and Sev!  A PvP mount was the reward, and I excitedly ran both of them to tell them about it as it was well within the normal games we would need to win in a normal week and we decided we would get on Tuseday night if there was no shutdown and get those games done.

The mount reward was actually the same reward mount that you get from winning 75 rated battlegrounds which was good for us since we found it difficult to get into RBGs.

Luckily there was no shutdown and we started.  We had some amazing games - we had shaman, hunter and boomkin team that was really challenging.  We had to deviate from our usual technique (ie KILL HUNTER ASAP) and focus on the shaman and do our best to keep the hunter and boomkin cc'd.  The shaman was good - he used a lot of cooldowns, got a lot of heals in, rescued himself from the brink of death a number of times. It was a good strategy - the shaman wasn't free to purge my heals and the DPS were taking a good spread of damage from Sev as the shaman didn't have enough time to heal them up as he was busy healing himself. The boomkin was doing some healing as well and not spreading his damage that much, ad we heard him drinking during the proceedings as healing clearly made him OOM.  Fortunately for me, cc's from the hunter were not extensive and I was free to keep the boys topped up. 55GB of FRAPS later we had a win. Phew!

Our weakness continues to be the double melee team.  Silences are useless and AMS on DK's neuters our team's crowd control.  We got smashed by a DK/Warr/holy pally team and there wasn't much we could do about it. 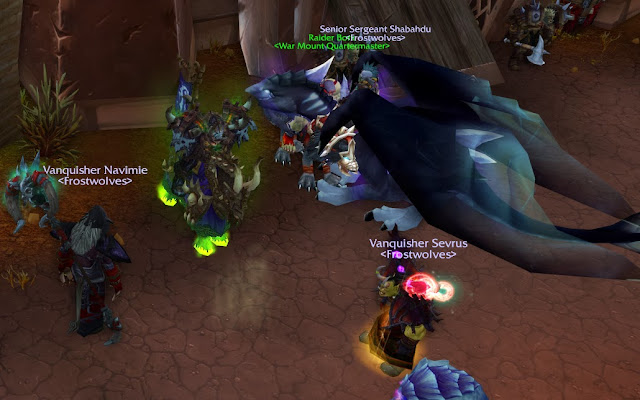 Shab got his achievement and saddle first and Sev and I told him he wasn't allowed to get his mount until we got ours. So a few more games later, Sev and I got our achievements and we went to Orgrimmar to pick up our mounts.  There are two to choose from - a Forsaken Warhorse and a Wolf.  Naturally, we chose wolves.  Taurens look ridiculous on those skinny skeletal warhorses.  I can see that they have put a Season 15 achievement there with another saddle, so we can go and get the Forsaken Warhorse next season.

And hey look, it's the same mount that the Kor'kron ride! 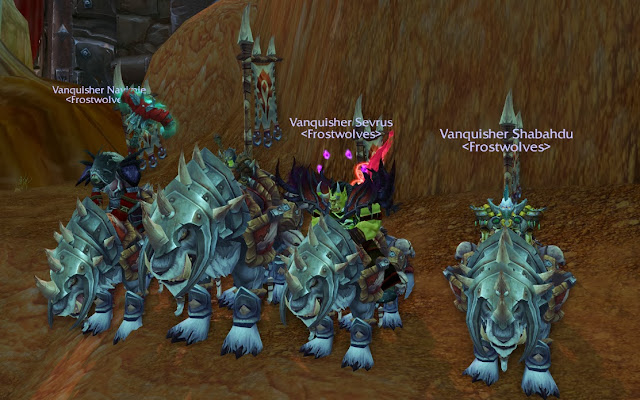