Challenge modes - Silvers for Sev, and Navimie being carried to gold

Asys has friends on Blackrock from Concur that were looking for more people to do challenge modes with.  I felt a little hesitant because I don't really know them, and I have no idea what they expect. I don't pug and I don't like playing with people I don't know.

For the past few weeks, they had been coming to our Flex runs on sundays, on various toons - Riptyde and Vinyl.  The two of them enjoy volunteering the other to do towers in Galakras.

So Asys was again asking me on their behalf about CMs, and so I swapped battletags with Riptyde. On Saturday night he kindly agreed to carry 4 of our CM group (me, Luxy, Sev and Aimei) on some of the CMs that Sev and Aimei needed.  We started off in Mogushan Palace, and had a hiccup with Aimei dying a bit on trash and on the second boss but we finished it off with a comfortable silver.  We also learned something - you can reset it whilst you're inside the instance and it will put you back at the beginning!  All those times we wasted running around and resetting!

After that we did Scarlet Monastery and amazingly the pull that I hate so much after the first boss went really smoothly.  I have no idea what happened but they died easily.  After that pull, Rip told us to use our invisibility pots to skip the next trash and run across to reach the front of the cathedral - that was handy! They did none of the trash on the side, and pulled Brother Korloff into the fountain and just had Sev soaking when Korloff did the jump and fire spin (which to my distress Sev thought he had to stand there and actually SOAK it - he was supposed to run out of the fire) and then they chain pulled in the cathedral and then pulled the boss and stood next to the side, without killing the adds on the right side.

So Sev got all his silvers and got his mount!  Now we have to finish getting Aimei/Lushnek all his ones - he's the last Challenge Mode Noob to get to silver. 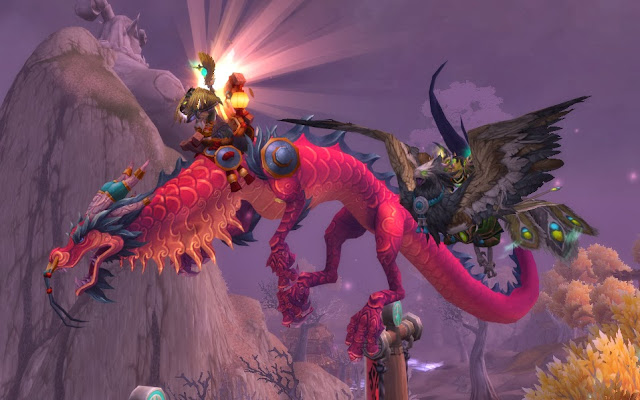 Last night Frostwolves did a flex raid, and Vinyl and Rip joined us for the beginning of it.  However, they had to leave at 10 or so to do their own raid and Vinyl (or was it Rip) asked me if I would be up late to do some Challenge Modes.  Of course I would be delighted to!  I did feel guilty that I wasn't doing it with my Challenge Mode Noob buddies, but I knew none of them would be on at 1am except Luxy.  I asked her, but she wasn't feeling the best and didn't really feel like it, so I went alone.

Going with a bunch of people I don't really know, is always a little nerve wracking.  I don't know if my healing will be enough for their group, or how hard they're going to push.  I don't want to look stupid!  Anyway, I know I'm not a dreadful healer, but I'm not the best healer either, but I have done a few CMs so I shouldn't be a total noob.

Rip and Vinyl were there, with more Concur-ians, Nova and Hobgob.  I dunno what to call people who have multiple alts...  I got on Mumble whilst they decided what they wanted to do, and they settled on Scarlet Monastery, Scarlet Halls and Siege of Niuzao.

Scarlet Monastery is one of my most disliked ones, because of that pull after the first boss.  I remember all our CMN runs with wipes there - and I wondered what they were going to do.

I've never run with a DK tank before, and their self healing and damage as tank seem to be pretty good. They had a 2 shamans and a monk as DPS.  Which meant lots of bi

Just watching the little things they do to cut time was interesting.  So they did a run just like the SM run we did earlier, but without the mistakes - my first gold. 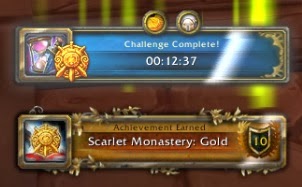 Next they did Scarlet Halls, and they threw the dog foods like we do, but also pulled something on the side, I think, to get more kills, as well as do one pack inside the gauntlet part that we normally use invisibility pots (but we also pull one of those packs).  That was my second gold. 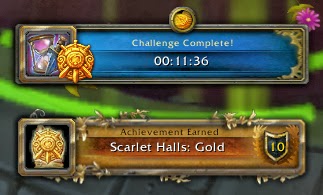 Siege of Niuzao had some differences, but the main one was that they DPS'd adds one level down for Commander Vo'jak (the one where you ring the gong to make it go faster) and we stayed up top, and for General Pa'valak they don't pull any of the adds before him - they tank him in the corner and then when he runs out to do his shield thing, they gather up the adds then and bomb them with the bombs as well.  Which is stressful to heal.  Third gold down.  OMG, it was 330am.  Time for bed. 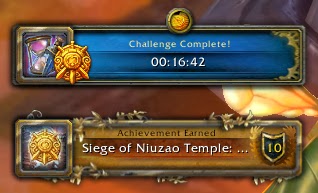 Then after raid on Monday, I was doing some PvP and they asked if I was up for more CMs.  I said I needed my PvP fix first, and then when we won our arena and BG, I went with them to Shadopan Monastery.  They don't use their invisibility pot at the bridge - they ride through that and die at the end and then use a shaman pop and rez.  The invisibility pot is saved for running over the bridge to get to Taran Zhu, and they pull Taran Zhu to behind the pergola and tank him there.  4th gold.  And an extra achievement - yay Shado-master Navimie! 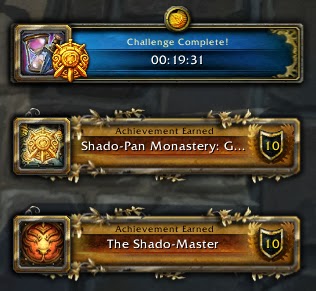 Then onto Gate of the Setting Sun.  OMG, they run down the side and pull EVERY mob into the back corner and tank it there.  Which after multiple wipes we got eventually but boy was that a fun heal!  The rest of it was stock standard, I think, except that they cc'd two adds and killed one and then jumped onto an elevator, somewhere.  5th gold. 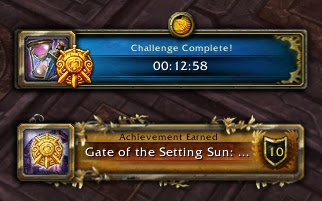 Mogu'shan Palace was the last one.  But I was getting pretty tired by then and making dumb mistakes - oops, I let the tank die.  Oops, I ran through warrior whirlwind and died.  Oops, we were supposed to drink invisibility pots here and I just ran ahead and got seen and died.  Oops my fat bear ass is stuck on the balcony and I am having difficulty jumping over...

So no gold for that one despite their best efforts.  Oh well, another day!  But how chuffed am I feeling right now!  So grateful for the carry Concur-ians!  Hopefully I will learn enough so I can teach all us Challenge Mode Noobs how to do it - or we could do a guild run so we can unlock Challenge Conquerers Gold Edition!