I haven't had much luck lately with finding people, I kept missing them!  And of course, with the move to Saurfang, taking over GM, and patch 5.4, that was busy!

It has been some months, but Katherinne from WoW in the Details said she would love it if I visited.  She has a rather cool blog, taking pics of all the little details in WoW, such as flowers, decorations, props, herbs and little background stuff you never knew existed.

I'd managed to pop over a few times but she wasn't there, and so we played ping pong game mail and twitter for a bit and then one day we finally crossed paths!

She was in a raid, so I just chatted to her for a bit and went back to my main to do stuff and wait till she'd finished.  When it was done she came to Darnassus to meet me. 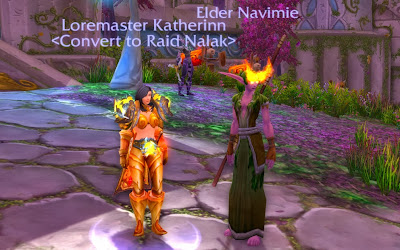 Convert to Raid is that giant massive alliance guild (like the Horde AIE on Earthen Ring) and it is hard because in such a big guild, nobody really knows anyone else, it seems, when I ask about guild members.  It took us a few goes to get a screenie as we kept getting photobombed by accidental drivers by. 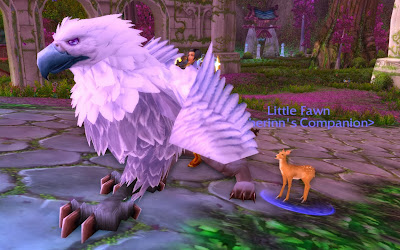 Katherinne likes her Gryphon and fawn the best, of her pets and mounts.  I asked her if, like me, she was all squee about Bossy Pally doing a shoutout about us on her blog (brought to my attention by Arvash - since he got a shoutout as well)

I asked her about what gave her the idea for her blog, and she said that she really liked NPC references (who doesn't? All the best people do! :D) and then she had this idea and it was an original idea - she wanted to write something but she wasn't much of a theorycrafter or class expert and even heavy on achievements, and she quite enjoyed taking pictures - a very natural evolution of an idea for a blog!  If you haven't looked at her blog, she does like to take pics of those little things in WoW - I am sure the designers of backgrounds are glad SOMEONE is paying attention!  Some examples:

And there's plenty more on her blog, so if you love looking at little pics of random details, go and check her out.  Thanks for letting me navispam you, Katherinne!  And hopefully I'll catch up with you at Blizzcon :D