I was reading Orcish Army Knife yesterday and Rades was talking about Fabulor and the super soaker.  He was talking about the bizarre graphics that Fabulor had when he equipped the soaker (like his spine was broken and his body twisted bizarrely so you can see his butt and chest in the same shot) - however, I was more interested in seeing that gun he had - he said you get it from Tortos!  How do you get that from Tortos, a blue quality item, Shado-pan Geyser gun?

So I read about it and I thought OMG that is so cool, I must get one!  I logged on and nobody was on in guild, so I asked Zeirah to party with me to see if I could go investigate this phenomenon in our cleared instance!

She was on Barthilas doing some mining, so I made a raid and off I went.  Oh no!  I can't zone into Throne of Thunder because the other member of my party is from a different zone!  So I was trying to decide whether to ring Lush or Luxy - Lush was sick so he might be sleeping, but Luxy was also sick but she USUALLY is up playing some other games...

So I rang her and she sleepily said "Hello?" and I blabbered my apologies and talked at 100 miles an hour about Throne of Thunder, Tortos and this Geyser Gun.  She said she would get online soon.

In the meantime Zeirah had logged onto Saurfang with her level 20 alt and we made a raid and I found I could get into ToT then!  So I zoned in, and of course, we were working on Lei Shen so I had to run back to the beginning of the instance.

It is possible to run all the way back.  Once you get to Ji-Kun you just jump off, take a feather and enter the red portal in the middle high up in the air.  At Megaera, there is a geyser you can interact with which blows you back up and then you run all the way back to Tortos.

So I started to jump.  Oh my lord, I am a spazz when it comes to jumping, I had a few goes and couldn't get past 5 stacks.  Luxy had logged in by then and I invited her to raid and she came and started jumping.  She got to 80 stacks on her 2nd go!  I was feeling even more retarded then, and so I thought I would log and go to Lush's house and see if I could do better on a real computer instead of my laptop. 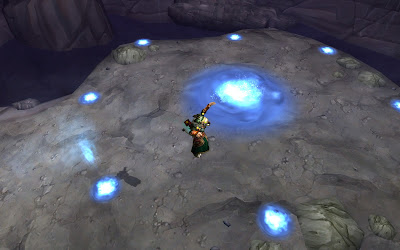 So by the time I got there (I had a meeting to go to in the evening and Lush's house is near my work), Luxy had got her 250 stacks!  Lush was resting, but I got him up and he too had to listen to my hyper excited chatter about this item.  He said he had wondered about that because he had been building stacks jumping around in Tortos on those geysers one time whilst waiting for raid to get started.  So he watched me for a while as I tried to jump, and I was excited when I got to 25!  Then a few more fail attempts - I tried it as bear then tried it mounted on a water strider (that didn't turn out well) and then I got my all time best of 45!  I had to leave by then, so I begged Lush to try it for me, and he reluctantly said he would.

As I drove away, I rang Luxy because I didn't want to disturb Lush's jumping and told her how stupid I am. She said that you could do it mounted and with another person so the other person could get your stacks too - I thought maybe I would try that later if I couldn't do it.  Lush rang me, and then told me that he got to 102 on his second go!  If I didn't feel silly before, I sure did now!  But I was excited, maybe I would get my gun soon! 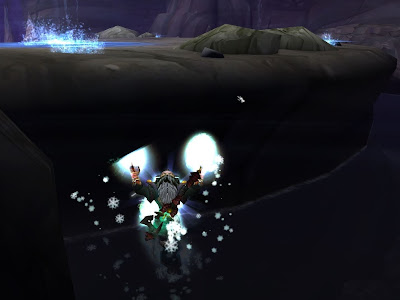 By the time I got to work, Luxy told me that Lush had got me to 250 stacks - on his THIRD go!  But with my meeting, I couldn't get home in time to log in and play with it, so I decided to leave it till servers came up. Lush said you get a pretty snowflake effect at 250.

So, if you want to try this, probably the best option is to use an instance which has cleared at least to council, or to go into LFR and do this - probably best to do it after the raid has finished.  I wonder if Zeirah got hers yet?  She went to try it when me and Luxy were trying it.

Thanks Rades for the heads up!  I am sure everyone out there will be out getting their Super Soakers now!
Email Post
Labels: Navi stuffs up vanity items