Mourning the end of Arena teams

Most people would not mourn the loss of arena teams - opening up arena to an LFG type thing is probably something a lot of people would like, and would make some really competitive combinations.  I guess it's all part of the dwindling server disease and opening it up so you have more people to play with is part of the reason why we're in an MMO in the first place.

However, my arena team has been the same for a long time.  I have had the same arena partner since BC (Sev and I for 2s) and in the last year or so we had Shab joining us for arena in 3s.  We've had a fun time, and learned a lot from each other's playstyles, and though we are far from being pro, we have set aside time each season to make sure that we can play together, and I think we have all become better players for it. Shab has become the strategist and the dissector of our team game play, whereas I tend to be the potty mouthed punctuator (I do applaud my teammates for being able to distinguish the meanings of my varied ways of saying S**T and F**K).  Sev usually is the quiet one and when he starts swearing you KNOW it's something REALLY bad.  I still have not trained Sev's pet to stop line of sighting me with line of sighted enemy healers, but maybe one day... 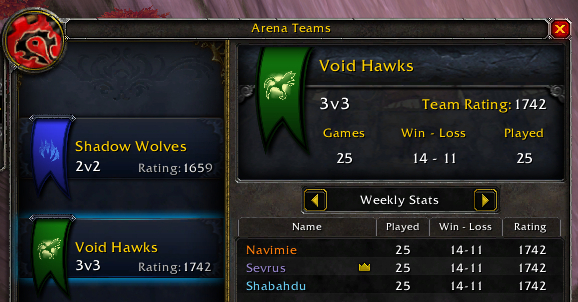 We never did get a 1750 3s rating.  This was the highest our team ever got.  I think I screenshotted EVERY increment we got in rating until we got to this.  Next season we shall work on that!

But the real reason I am writing... is because tomorrow is the end of the arena season.  This season was different because it's the first season that I could actually purchase Elite gear - I was much more diligent with my conquest caps than I was with my valour cap.  Hell, I even earned more conquest this season than I did honour.  Aza told me that I should get out there and buy something while I still can.  However, much to my chagrin, there isn't really anything I would really like to buy.  Perhaps the shoulders... but even that's a bit of a stretch.  I feel like I should buy something as a souvenir of the season - but if I do that my precious bank space will be cluttered with even MORE junk.

So tomorrow, it's farewell to Void Hawks, and farewell to Shadow Wolves.  I know that I will still be able to play with Sev and Shab, and it won't affect our gameplay at all, but saying goodbye to my team just brings the hint on nostalgia that makes me wanna grab a tissue.