Navimie returned to Myralion Sunblaze and he watched her approach, an expectant look on his face.  He greeted her as she landed.

"We've been expecting your return. What has kept you?"

Navimie briefly told him about the events surrounding the book, and handed the heavy tome to him. He took it from her and began to leaf through it.

"These symbols on the blade seemed familiar and now there's little wonder why," he said, thoughtfully.  "This is certainly a dragon blade, gifted to one of the mortal races, but which blade is this, and how did it come to rest in Icecrown?"  He frowned as he reached the same conclusion Navimie had earlier.  "After all these years, can it really be..."

A woman's voice echoed from the skies above them.  "Quel'Delar."

A shadow appeared and a great being descended from the skies.  Navimie recoiled in horror.  It was Blood-Queen Lana'thel, a formidable foe Navimie had encountered in Icecrown Citadel, and Navimie prepared herself for a fight. 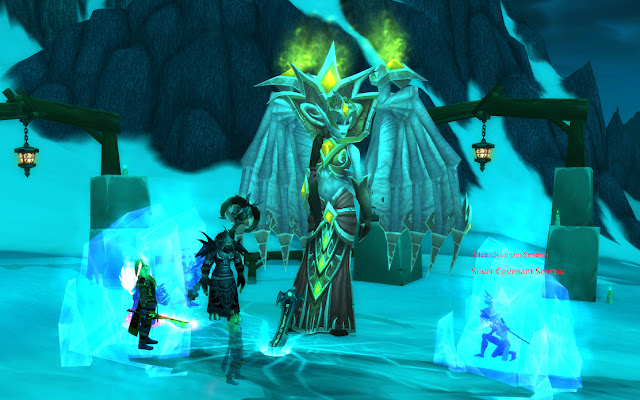 A Silver Covenant Sentinel drew his sword menacingly.  "You are not welcome here, minion of the Lich King!"  He and the other sentinels, as well as the Sunreaver guards charged at the Blood-Queen.

With a disdainful glance, Lana'thel froze all the guards in a blocks of ice.  "Quiet, fools," she said, her tone bored.  "If I had wished to kill you, you'd already be dead."  She turned back towards Myralion.  "As Quel'Serrar was forged by the dragons and given to the Kaldorei, it's twin, Quel'Delar, was given to my people."  Her eyes took on a faraway look, and a ghostly vision of Alexstrasza and two high elves speaking appeared before them.

"The king bestowed the blade upon my friend, Thalorien Dawnseeker.  But even Thalorien's skill and Quel'Delar's magic could not save Silvermoon from the might of the Scourge.  Thalorien fell before the gates of the Sunwell, buying time for others to escape."

The shimmering vision changed, showing a mounted death knight resembling Arthas killing Thalorien.  Navimie was entranced as she watched history unfold from the memories of the Blood-Queen.

"After the battle, I recovered the sword from the field. I bore it to Northrend in the service of my prince, seeking to avenge our people's defeat. Arthas shattered our forces and took the most powerful of us into his service as the San'layn. My memories of Thalorien went cold and so did his blade."  Her voice turned to ice as she glared at the sword.

"It was I who brought Quel'Delar here, to return it to it's makers. In breaking the weapon, so did I break it's power. Quel'Delar will never serve another!"

She shot a bolt of pure energy from her palm, shattering the sword.  With an imperious glare at all the high elves and blood elves, she launched herself in the sky and headed back to Icecrown Citadel.

Myralion Sunblaze knelt to gather up the fragments of the sword.  "It falls to us to see Quel'Delar restored for the Sunreavers."  He continued to contemplate them, an odd expression on his face.


"We cannot allow Quel'Delar to remain broken and disgraced. Reforging the sword must be a priority!  Take the remnants of the sword, along with the battered hilt you discovered, and venture into the Pit of Saron within Icecrown Citadel.  In the pit, the Lich King uses slaves to mine, process, and transform saronite ore. This infused saronite is what we will use to rebuild Quel'Delar.  You must gather bars of infused saronite and capture the forgemaster's hammer, then bring them to the forgemaster's anvil and reforge the sword."

At least it's not that far, thought Navimie, as she launched herself into the air, tracing the path that Blood-Queen Lana'thel had taken.

The Pit of Saron was a Scourge controlled place, full of Alliance and Horde prisoners put to work mining saronite.  Navimie had freed many prisoners in previous ventures into the Pit under the direction of Sylvanas, and today she released all those who were in her path.  The horde prisoners were so grateful, as she snuck around stealthed, releasing their bonds, but she knew that she could not possibly free them all.  She stole saronite bars from the many stacks that were cached, and it wasn't long before all that she needed. 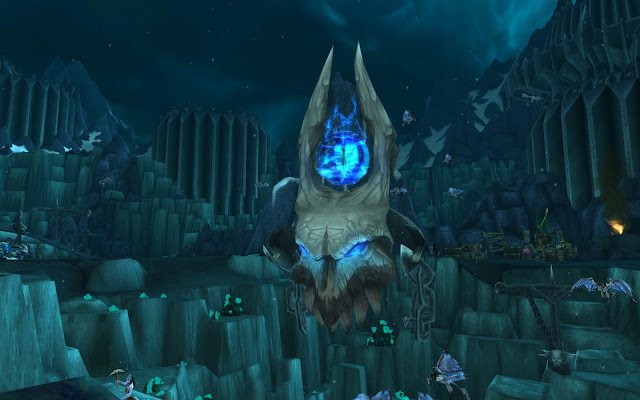 That left Forgemaster Garfrost.  He was a huge flesh giant, a master of Scourge weaponry, who hauled stocks of saronite ore and other precious materials to the cold forges where the mechanisms of death were born.  Navimie charged at him in Dire bear form.

Garfrost roared at Navimie, and the air around them turned to ice, chilling Navimie.  The permafrost was causing ice to form on her pelt, and it was getting thicker every few seconds, the cold sapping her strength.  "Will save you for snack, for later," he growled, as he picked up a Saronite boulder and threw it at her. Navimie easily dodged it and hid behind it for a few seconds, shaking the ice off her fur.  She ran out and swiped at him again, her teeth and claw rending his flesh beneath the ice layer protecting him.  She tried to run as she saw his foot raise in the air  and was stunned momentarily as his foot slammed the ground, the ice cracking, her ears ringing from the thundering stomp.  She shook her head to clear it and charged again, watching him weaken from blood loss from the wounds she had inflicted. Garfrost threw aside the axe he had been wielding.  "Axe too weak.  Garfrost make better and CRUSH YOU!"  He ran to the forge and a few seconds later, emerged, hefting a menacing looking sword.  Navimie's eyes narrowed.    As he lumbered towards her, she leapt towards him, and locked her teeth around his wrist, her claws tearing into his flesh.  He grabbed her by the neck and ripped her off his arm and threw her to the ground, and brought his sword down with a mighty crash.  Navimie rolled to the side, and the sword missed her head but clipped her shoulder, leaving a patch of fur and flesh on the icy ground.  Garfrost threw the sword at her and ran to the other forge, and began to create a mace.  Navimie shifted into cat form and leapt at his back, her claws digging in as she scrabbled up to his shoulder and shifted back into bear form to tear hunks of flesh from the giant's neck.  He roared and grabbed her by the leg and threw her across the room and she shifted back into her agile cat form and landed on her feet, claws extended, digging deep furrows in the ground.  His Frostborn Mace was menacing, jagged, and powerful looking and Navimie was going to stay WELL out of it's reach.  One clubbing to the head and her brains would be all over the ice.

Garfrost was almost spent.  Navimie mauled and lacerated him until his legs were a mass of mangled flesh and blood.  He fell to his knees, moaning.  "Garfrost hope giant underpants clean... save boss great shame... for later."  And he collapsed with a resounding crash onto the ice.

Navimie shifted to caster form and healed herself as she searched Garfrost's body.  Hefting his forgemaster's hammer, she carried it to one of the forges and began to work on the sword.  She was no blacksmith but she managed to reforge the blade.  As she worked the fires she wondered what she would have done if she DIDN'T know how to work a forge.  She could have just asked one of her blacksmith guildies to help - maybe Moopie or something.

She left the Frozen Halls and flew back to Myralion.  "It is done," and she handed the crudely reforged sword to him.  He took it from her and inspected it.  Navimie cringed, expecting him to make a scathing remark about her smithy work.  Instead, he smiled, his tone approving.

"You have remade the blade of Quel'Delar in defiance of that Blood-Queen Lana'thel's pronouncement! Now, the blade must be tempered before we can show her the folly of her words."

The other Sunreaver sentinels gathered around to view the blade.  Myralion held it aloft.  "At last, the pieces of Quel'Delar are rejoined and the blade is whole!"  He turned to Navimie, handing it back reverently  "BUT, it cannot see battle until you have tempered it. That jagged saronite edge is brittle and will shatter the moment it strikes anything."  He gestured back towards Icecrown.

"Deep in Icecrown Citadel's Forge of Souls is a place where the blade can safely be tempered. Take Quel'Delar with you to the abode of the Devourer of Souls and look for the crucible. Plunge the blade into the crucible to temper it and bring it back to me. I'll be waiting in The Frozen Halls."

He could have told me when I was already over there, thought Navimie, irritably, slinging the sword over her back.  She wondered if the arrogant Sin'dorei was gaining some sort of personal amusement making her jump through all these hoops like a performing monkey.