Wow, it's been a while since CMN took on a challenge mode!  We were rusty, and we had a think about what we should try for this time.

Since we were so close on Jade Serpent last time, we thought we'd try that again.  Karn wasn't on, so Sev joined Arv, Luxy, Lush and me.  He was there for our other challenge mode on Jade Serpent where we missed Silver by a few seconds - well, maybe 20 seconds.

We started off OK, and then when we got to the first boss, Wise Mari, we reminded ourselves not to stand so far back.  So we stood nice and close... and bang!  Water splashed us and 3 of us died.  Whoops.  We just pretended we didn't do that attempt and we reset it.

Doing it a second time was fine, and then we did the gauntlet run to the second boss, and remembered this time to drink our invisibility pots just before the crane.  We ran, and engaged the last mob before the boss and then did the boss.  We weren't sure if we had to do that mob or not, but we did it just in case.  Lorewalker Stonestep was quite easy and then we went to the room with all the sha-lings around.

I always have difficulty with healing that room.  I could never understand why.  We did it - and we died.  What I didn't know is that when we ran into the room, it always ends up pulling 2 or 3 of the big adds, which I have difficulty healing through.  We wiped and ran back in and did it again.  We ended up pulling Liu Flameheart whilst running around and Luxy died but she ran back (lucky it's a quick run) and then we got her down, and engaged the adds before the Sha of Doubt.  I was OOM and had no CDs to get mana back so we died... omg it was crap.  So we missed the timer, and then thought should we reset it?  Nah, we should just finish it for the gold and the valour points.  So we did, and missed silver.  So we did it again.

This time when we did it, it was much better.  Smooth through Wise Mari, this time we used our invisible pots from crane down to Lorewalker Stonestep, so we pulled him when we got there, so we avoided the last mob on the stairs, which saved us a minute or two.  In the room with the sha-lings, Arv pulled them outside so we got one group at a time which was easier for me, and then we killed Liu Flameheart, with plenty of time for the Sha.  And we comfortably got our silver! 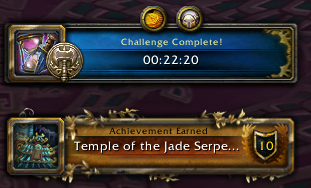 Yay!  Though I have to be way better with my mana if we're going to go for gold because I drank at EVERY opportunity and when you watch those youtube videos - nobody ever drinks!