Booyah!  Council is DOWN!  It appears that 60 is our magic number... 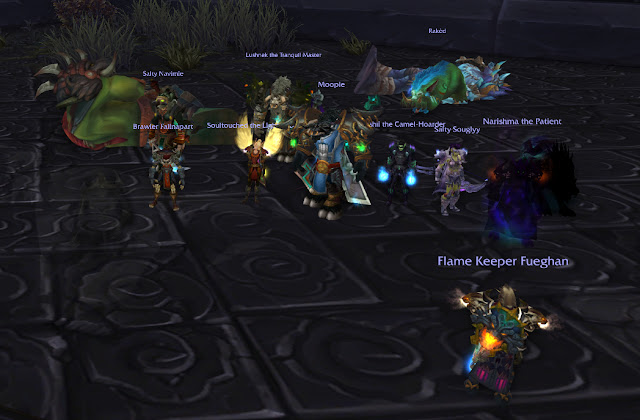 We tried so many things, but in the end, people can't stand in bad, tanks have to taunt, and healers have to heal a lot.  We did the Sul goes second method, so that we never got Sul to enrage again.  Mana was ALWAYS tight.  We don't have spell power, we don't have bloodlust, and we didn't have healthstones (though I thought they were valuable, not everyone agreed) but we somehow managed to do it!

Halfway through the night we managed to get Sul down.  But a few people were dead then so it wasn't a real attempt but it was encouraging!

On the kill attempt, Raked said with a resigned voice "Can we just kill this?  I'm getting tired and bored of this," and he resolutely faced Sul's foot again.  I honestly did not think that this attempt would go well, because it was 1040pm and we were all tired and demoralised.

But the fight went well.  People were not dying to bad stuff.  There were close calls of course, but they either used their healthstones or we managed to catch them.  Mana was CRAP.  There was a point when the raid was all around 20% health and I was in tree form just spamming regrowth on Raked so he would not die and I burned through 150k of mana.  Lush was OOM and so was Soul.  A few more seconds until innervates was up.... then Fue died. He got rezzed but died a minute later whilst trying to taunt a mob off Raked.  I was thinking what the other healers were thinking - PLEASE KILL SOMETHING! - and even Soultouched said "Can you please kill Sul?" and I watched as Sul's health ticked down and he went down.  I cheered!  Then the next to go down was Mar'li I think, and the Frost King went down and healing was SO much easier by then.

"Don't go crazy," said Narishma as they all went on Kazra'jin.  "Careful with dots too coz they continue to tick," said Lushnek.  But OMG the cheering when we got it down!  What a huge relief!

Talk about druid love!  Healing chest dropped as well as Tier gloves.  I took the gloves and Lush took the chest, so I was super pleased as I now had my two set tier bonus!  Falln and Moo rolled, and both got loot, with Falln getting a THUNDERFORGED Zerat, Malakk's Soulburning Greatsword, and Moopie getting a ring.

On the kill, I had a look at my spells and boy was I embarrassed!  My mouse button 4 is not working properly and half the time wild growth does not get cast on my button press and you can see that in the heals I used.  Wild growth should be very high on my list, but I have it way down - it's below LIFEBLOOM for goodness sake.  I really need to fix that button on my mouse or get a new mouse.

Oh we also got to see a cutscene, which was pretty cool, as it showed us in the cutscene.  I thought it was quite funny because some poor person wasn't in the cutscene... not sure why...

But good work guys!  Can't wait till Sunday (as long as Raked isn't playing soccer) when we can start bashing our heads on Torta.  Yay Frostwolves!