Still working on those new BG achievements, and edging closer and closer - is it just me or are those achievements way easier than the older BG ones?  Anyway, only one really elusive one for me in mines - the ninja cap!  I thought this Escort Service achievement was a bit buggy - I'm not sure if I have to escort the mine ALL the way from capture or whether I just have to be in the vicinity if I capture.  And I also wasn't sure if being on my mount made it not count as a capture.  Anyway, either way I got it, so I can stop playing like a ning-nong now.

Shadow Rising let me and Lushnek come with them again for the last achievement I needed for my Glory of the Cataclysm Raider.  Yay, Heroic Conclave down!  That mount is better looking than I thought originally.  Still probably won't ever use it though. 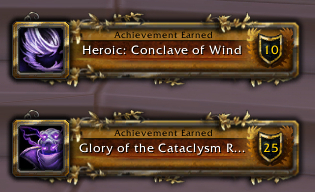 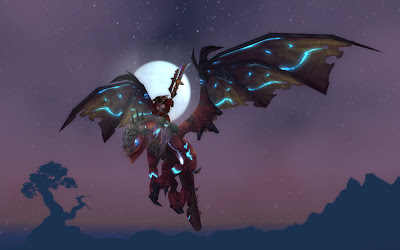 I got Nalak this week for the first time.  That was an easy achievement.

And I went around camping those Warbringers and Warscouts for Zul'Again.  It was just as well that Lushnek was keen on the rep stuff that drops so that I didn't have to solo it (not that I could solo a Warbringer) or drag some reluctant person with me.  I have no alts so that rep thing is pretty pointless to me, so I was glad Lush was collecting them - he got enough to get his mage to exalted with August Celestials so now those Imperial Silks will be put to good use making bags!

Saturday was challenge mode day again, and we would have started earlier if Lushnek hadn't chosen Pinnacle of Storms as our LFR.  Of course, we didn't finish, but at least I got some loot (Tier shoulders yay).  We decided this time to do the daily challenge mode which was Mogu'shan Palace and after a few false starts and resets, we managed to live through our occasional death on a boss or trash and on the final boss Arv tanked the boss at the door and we managed to scrape into a Silver Medal with just 40 seconds to spare - we were all so excited!  3 achievements out of that run (Challenge mode, Bronze and Silver). 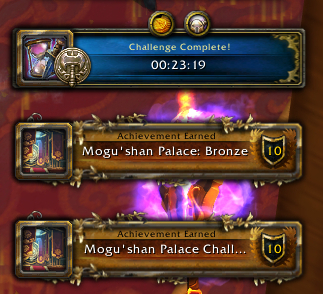 So then we went to do Arv's daily but it was Scholo and Arv wasn't sure he'd have time to do it, so we skipped to Scarlet Halls instead.  There was a slight hiccup as well - we had reset the instance so many times me and Luxy were locked out and were forced to have a 10 minute break!  We spent so much time wiping on trash and trying to stealth/die/res through the cannon bit it was hilarious, but we were only 2 minutes off a medal despite all our wipes!  So hopefully next time we will get a bronze LOL.

And 25 wins in rated BG finally.  It's gonna be a LOOOONG way to that mount...